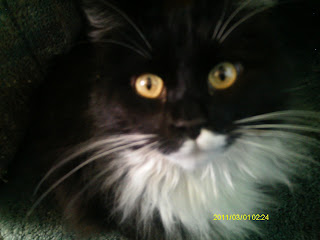 Here is my new sister, who doesn't have a name yet.  Mom never uses the flash on me, so she wouldn't use it on her, either.  Mom had a hard time getting a good photo, as little sister doesn't hold still for long, but this one came out pretty well.

Karen Jo:  So far she has come out to eat up two portions of Stinky Goodness and the last time I went in, I got down on the floor and she came over to me for petting.  She hasn't told me her name yet, but all sorts of names keep popping into my head, like Emma, Lucy, Jennifer and Irma.  It will take some time, I guess, but a name will eventually stick.  She really purrs up a storm.  She hasn't used the litter box, yet, but I don't really know how often cats go.  She let me pick her up and put her in the litter box, but she hopped right out again.  I don't smell anything untoward, so I guess she just hasn't needed the box yet.  Herman spends time sitting outside her door and wants to go in every time I open the door.  I don't think that the getting used to each other time is going to be very long at all, but I will try very hard not to rush it. 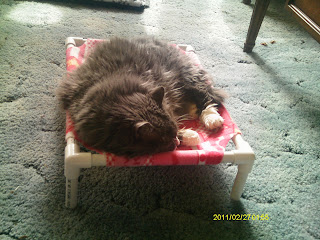 I am making sure that my ham-mick doesn't disappear into the safe room.

Karen Jo:  I wouldn't do that to you, Herman.

My scratching post and my Starlight Turbo Scratcher and some of my toys disappeared into there.

Karen Jo:  You hardly ever use your scratching post and you only use the scratcher part of your Turbo Scratcher.  I didn't take any of your favorite toys, either.  You still have your cardboard scratcher.

Mom got up at way-too-early this morning and used the litter box room and got me my breakfast, but I knew something was up when she didn't go back to bed.  I got a little nervous when my PTU came out and Mom put a fresh towel in it, but she shut it back up empty, so I relaxed again.  Then my foster Mom showed up and I got a bit nervous again.  Almost every time my foster Mom comes over I end up at the vet, so now I avoid her.  Then Mom and foster Mom went away for a while and when they came back, my PTU wasn't empty any more.  Mom put the PTU on the floor in the living room and something in it meowed!  I meowed back and got an answer from the PTU, so I went over to investigate.  There was a kitty in there.  She backed away from the door, but I got a good sniff of her.  Neither one of us hissed or growled. Then Mom and foster Mom took the PTU into the safe room and opened the door of the carrier.  I was really torn between wanting to keep my distance from my foster Mom, just in case, and seeing what was going on.

Karen Jo:  I'll take over for a while, as Herman stayed a ways down the hall.  His new sister is a gorgeous black and white tuxie with golden eyes.  She has medium long fur.  She was a bit shy of coming out of the PTU at first, but came out when I put some Stinky Goodness in her dish.  She also had fresh water and Kitten Chow waiting for her.  She munched some Kitten Chow and drank a little water.  Herman's foster Mom had to leave, so I walked her to her car and forgot to close the door of the safe room.  When I got back, the little girl was back in the carrier and Herman was drinking her water.  As I stepped into the room, Herman approached her food dish and she let out a little, very lady-like, growl.  I evicted Herman and stayed with her a bit, but she stayed in the carrier.  I guess Herman gave her just a little scare.  I left her alone for a while and when I returned, she had discovered Herman's mancat cave.  I sat on the couch and reached down and scratched the carpet and she came out to meet me.  She wanted to be petted.  She is a little shy.  She will let me pet her for a while, then she goes back into the cave, then comes out for more.  She even rolls over for a belly rub.  Her purr motor went into high gear.  I am so used to Herman's almost inaudible purr that it sounds loud to me, but I think it is probably just normal volume.  I am going in and visiting for a few minutes every hour or so.  Herman spent nearly an hour outside the door to the safe room when she first arrived, but now he is just going about his daily business, though he does go check the door every once in a while.  He is always waiting for me there when I come out and has darted in again a couple of times.  I think Herman likes her and is eager to make her acquaintance.  She is quite a bit smaller than he is and I think she is just a tiny bit afraid of him.  Pictures will have to wait until she feels secure enough to come all the way out of the ladycat (?) cave into the light.
Posted by Karen Jo at 12:59 PM

How very exciting Herman! I know it will take some time but y'all will do fine!

This might not the take the "months" you were anticipating! Woohoo! :-)

This is fun news...nothing like a new member of the family! We can't wait to see pictures, but understand giving the little lady time and space. Sounds like she and Herman might hit it off quickly!

Oh such good news that she is there - she sounds a lot like Trixie was a little over a week ago when we brought her home - though she did stay hidden a bit longer (but then again she had 6 other cats to deal with outside her door). It sounds like things will go well - a little hissing is to be expected when there are first meeting, and it sounds like Herman did just great. It sounds like he knows she is tiny and scared and didn't want to freak her out too much. We did the same thing with the photos of Trixie - we gave her a couple days to get comfortable before flashing in her face, and by then she was fine with it. We hope your new little tuxie baby will be the same way! But of course, we do have one question - does she have a name?

We are super-duper excited! Any thoughts on the Little Missy's name?

OH my what excitement!
Herman who is your little sister?
Do tell us her name.

Sounds like great progress in a short time. We are so happy for all of you. Hugs and nose kisses

How exciting! She's beautiful! She's a very lucky kitty to get such a wonderful forever home.

Mom and I are really excited for you. Welcome Tuxie Girl!

She's beautiful!! We are so happy you are gonna try to give her a home.

Now, Herman, be nice to her and make furiends!!

The new kitty is so pretty! How thrilling! I am sure that Herman will love her, maybe sooner than later.

Oh, that's sweet, you have a new sister. We hope you will learn to love her when you get to know her. She really needs a home.

awwww bless you for taking a new kitty!!! Poor Herman, hopefully he will get over it soon! i love your new website!!

Hi Herman's new sister!! We are very pleased to meet you!! We just know you and Herman are going to get along famously!!
Howdy from your TX furiends,

This sounds like it might be a great fit for all involved. We think the fact that the new lady kitty felt secure enough to hiss at you, Herman, is a good sign. You don't want to let her walk all over you but do cut her some slack for a little while. She's new and you will have to teach her who is the man-cat in the house!
We are sending happy new home wishes to the beautiful new addition and congrats to both you and Karen Jo for opening your home to her.
Snuggles and purrs,
Taz, Runt, Charles and mommy, Anna in IL

Oh this is awesome news!!!! We want to learn more about her!

Ah Herman, your new sister is beautiful! Congrats to you and your Mom. We will purr that the integration goes smoothly, it sounds excellent already.

She is a beauty! We hope she and Herman are great friends, soon

Lovely little lady. Make a great companion for the handsome Herman. Time and love will make things right. Jut no loud voices, and lots and lots of talk and petting and picking up. We love getting acquainted with new little ones at our house. Just now the clowder of cats out grew the house, so sadly, no more newbies here.

Truly a lovely addition to the family. Enjoy.

Hello pretty tuxie girl! You just landed firmly on all four paws when you came to live with Karen Jo and Herman. We don't think it will be long before you and Herman are friends, he's a big softy of a mancat we reckon.

How awesome is this! A new sister to enjoy and play with. ♥♥♥

Well well, Little Missie, aren't you a beauty! And you are a very lucky little girl, too - you got a great home. We think you kind of look like an Audrey... or an Emma, like Miss Karen Jo said.

Your new friends, Fuzzy and Zoe

How wonderful of you to give this kitty a home!