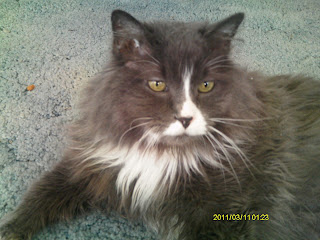 Aren't I a handsome fellow?  Mom has cut down on my treats again.  Now I only get five at what used to be pill time.  I keep telling her that I want more, but she just tells me that I am her wonderful big boy, but I got too big.  I still get the occasional treat for scratching on my post, but only one at a time, no matter how many times I scratch.  Mom caught me eating Emma's Stinky Goodness and picked me up and carried me to the kitchen and put me down in front of my own food dishes.

Karen Jo:  You and Emma get exactly the same Stinky Goodness out of the very same can.  There is no reason for you to eat hers.

Hers was closer when I got hungry.

Karen Jo:  Emma gets hungry, too, and she won't come into the kitchen yet to eat at the buffet.

Karen Jo:  I think she is figuring that out, but she isn't completely sure yet.

I wish she would play with me.

Karen Jo:  You made a good try this morning.  When I woke up at not-quite-time-to-wake-up-yet, Herman was at my feet and Emma was cuddled up next to my chest as I faced the wall.  Herman came over and lay down.  I had turned down the covers a bit, as the sun was coming in and it was getting warm.  Herman put his front paws under the turned down cover and moved them around, making baby Bed Monsters for Emma to pounce on.  She ignored him.  Then he darted out a paw and tapped her, urging her to kitty wrestle or even chase him.  She just snuggled closer to my chest.  The really important part of this interaction is that Emma did not hiss at Herman. This is the first time that Herman has touched Emma without her hissing at him.

She still hisses at me, though. 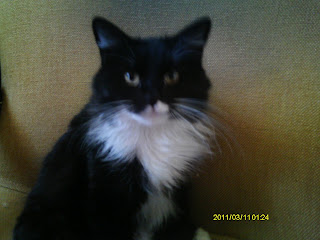 Karen Jo:  I am really going to have to start taking pictures of Emma earlier in the day.  I get good morning light in my room, but it doesn't last. Emma played her first game with Herman this morning.  I got up early to feed Herman and Emma breakfast.  Herman came with me to the kitchen, as he always does, but Emma, who now sleeps on my pillow, stayed on the bed.  I finished putting out the food and went back to bed, noticing that Emma had moved down to the foot of the bed where Herman had been sleeping.  A few minutes later, Herman came walking down the hall and prepared to jump on the foot of the bed to reclaim his sleeping spot.  Emma stuck her head over the edge of the bed and hissed at him.  Herman just walked around to the side of the bed and jumped up.  Emma hissed at him again.  She was playing Queen of the Bed, but Herman ignored her.  He looked at her and she retreated back up to the pillow and he reclaimed his spot by my feet.  I think it's great that starting last night, they both sleep in the bed with me, though at opposite ends.  I think Emma is losing her fear of Herman, or she wouldn't have been playing Queen of the Bed with him. While I was taking off my shoes tonight, Emma pounced on the laces.  When she tired of that, she attacked another pair of shoes on the floor.  I am glad that she is playing now.  Before this, the only thing that got any reaction out of her at all was the Cat Dancer.
Posted by Karen Jo at 12:16 AM

This sounds like a lot of progress to me!

Life is good and getting better! Nice try, Herman, to get Emma to play baby monsters with you.
Snuggles,
Taz, Runt, Charles and mommy, Anna, in Illinois

I think y'all are doing darn good...and yes Herman, handsome you are!!!

It sounds like Emma is coming around! They'll be playing together before you know it!

It sounds as though Emma is settling down well and playing with your shoes!! Herman will gradually accept her - it must be strange for him to have to "share" you with another cat after having all your attention. How nice it will be for him to have company when you are at work.
Luv Hannah and Lucy xx xx

Looks like things are beginning to work out. Such pretty pictures!
Happy Sunday,
~ Jasmine

YEAH Emma! I think he just wants to play

Herman it sounds like Emma is warming up to you! We think that is just great.

Good news! WE hope they get closer every day!

We are glad they are startin to inneract!

Also, we have learned that the youngest cat in the house tends to "wander" among food bowls. Annoying, but we remember our own kitten days of doin that.

Marey is so "wanderin" that I (usually) get my food in another room!

It is good that it is going so well. That's nice that they both are sleeping with you. Herman is such a sweetheart! Glad that Emma is snugglin' up to you, too.

Excellent news! Hope to see them playing by end of the week.

Wow, it sounds like things are really progressing nicely. How wonderful that both Herman and Emma are sleeping on the bed with you, Karen Jo. :)

"Hers was closer when I got hungry." MOL, Herman!

Happy St. Patrick's Day to you all!!
Howdy from your TX furiends,