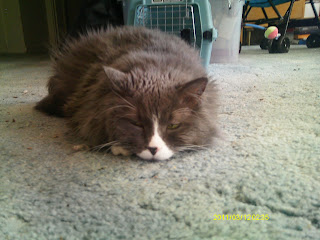 Here I am, just hanging around, wishing that my new sister, Emma, would come play with me.  I was thinking that she was getting used to me and even liked me a little.  Usually, I sleep in my usual spot, snuggled up to Mom's chest and Emma sleeps snuggled up on Mom's other pillow or next to her back.  Last night, after petting time with Mom, I decided that I wanted to sleep next to Emma, so I walked over Mom and settled down within inches of Emma.  She gave me a sleepy glance, then all three of us went to sleep.  When Mom woke up at dawn for breakfast time and moved around, Emma and I both woke up.  When Emma saw how close I was to her, she hissed at me. After breakfast, when we were all settling down to sleep some more, I walked up to Emma and put my head forward for a nose kiss.  She gave me the nose kiss, then hissed right in my face.  I backed off and looked to Mom for some petting comfort.  That Emma sister is too much.  She won't play with me and she won't cuddle with me.  I even have to share my Interferon with her now.  Mom gives me my Interferon, then my shredded cheese, then gets Emma's dose of Interferon ready.  I always tell Mom that I want it, but Mom gives it to Emma anyway.  This morning I totally turned up my nose at my cheese and do you know what Mom did?  She went and got Emma and plunked her down right in front of my cheese! Emma sniffed the cheese, then started looking around.  I was in the living room, just watching.  Emma darted to the hall and started to run down it.  I chased her to the end then turned around for her to chase me, but she wouldn't do it.  How can I play THoE if Emma won't chase me, too?

Karen Jo:  Watching Herman chase Emma down the hall was quite enlightening.  He is twice her size and could have easily caught her, but when he got close to her, he slowed down.  She ran into my room and he turned around before he got to the door.  Then he waited for her to come out and chase him, but she never did.  Only once have I seen Herman show the slightest bit of jealousy toward Emma. Bedtime is Herman's special cuddle time.  I had been petting him and Emma was on the other pillow behind my head. Emma gave her little "I want some attention" meow, so I stopped petting Herman and started petting Emma.  Herman gave us both such a look that I stopped petting Emma and went back to petting Herman.  However, it was just a few minutes later that Herman stepped over me to sleep next to Emma.  He really likes her, but she is still not sure of him. 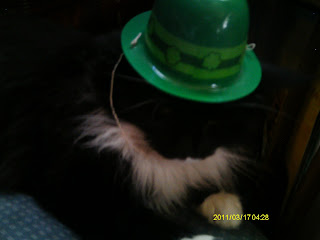 Karen Jo : At Herman's request, here is Emma wearing the St. Patrick's Day hat. She was really a good sport about it and only tossed it off once before settling down and letting me take the picture.

Emma:  I want to get some blog time, too.  I really love my new Mom and my new home.  However, Herman is a Giant Kitty and he spooks me.  He is twice my size and over twice my weight.  When I was an outside kitty, the other bigger kitties were mean to me and stole my food.  Herman has never been mean to me, except he chases me sometimes.  Mom won't let him steal my Stinky Goodness, but he drinks my water and sometimes eats my Kitten Chow. He also pees in my litter box.  I just don't know what to make of him. Sometimes he touches me gently with his paw.  Half the time I hiss at him and half the time I don't.  He gives me nose kisses, which I like, but sometimes I hiss at him for it, because I am not sure of him.  I want to go out and explore the rest of the house, but Herman is always there, in the hall, waiting for me.  He never chases me unless I run first, but I won't walk past him to get to the rest of the house.  Mom has put me in the living room once and in the kitchen once, but I ran back to her room both times and Herman chased me.  I just don't know what to do, except stay back here where I know it is safe.

Karen Jo:  I hope that soon Emma will get over being spooked by Herman and go into the living room and kitchen.  I am quite sure that Herman will do nothing to hurt her.  Quite the opposite.  I think that Herman wants badly to cuddle and play with her.  Things do get better day by day.  Emma has come up the hall almost to the living room and only changed her mind when she got within a foot of Herman, lying on the floor and watching her.  He really does only chase her if she starts running first.  If she walks toward him, he only lies there and watches her. He seems a little upset now if she hisses at him.  He looks disappointed, but backs off like a gentleman, giving her room.  I want so much for them to be friends, but I am willing to wait for it.  If it stays this way, with Emma just living in the back of the house and Herman lording it over the whole house, I can accept it, but I am hoping for both cats to enjoy the whole house.
Posted by Karen Jo at 12:57 AM

Herman, you are really a sweet kitty! You just have to be patient with Emma. I am sure that in time she will realize that you mean her no harm, in fact, just the opposite!

Maybe woo and Emma khould pawty with Huffle and Teddy!

Hugz&Khysses,
Khyra
PeeEssWoo: Yes, a Peregrine - they nest year 'round on the Rachel Carson Building in Harrisburg - there is a link on the third pikh down on my sidebar!

We're keeping our paws crossed that Emma will start to be less worried about you, Herman! We can tell you really want a snuggle buddy!

Herman - what a lovely gentleman cat you are - we know you wouldn't hurt Emma - she will come round soon and love cuddles and playing with you.
luv Hannah and Lucy xx xx

Herman, you're such a sweet and kind boy, but Emma has probably been hurt before and it'll take her some time to feel safe again. Hang in there my friend.

Herman is such a gentle sweet boy, I am still hopeful with great patience Emma will warm up to him. They are doing so well in a short time.

Herman you are being so nice, sweet and patient with Emma...just keep on being your sweet self, she is gonna love you one day and romp and play with you all the time. Hugs and nose kisses

Here's hoping Herman and Emma will get together real soon. Time is the best medicine for that problem though, so all can be done is wait and see.

Good rest of the weekend to both and to the Beans as well.

We espect that Emma will calm down an cuddle an play with Herman soon, because Herman is bein so considerate an calm. It will probly seem ta happen overnight one of these days...

I suddenly accepted Marley one day, an I notice that Marley an Ayla have suddenly started playing chase and wrasslin with each other.

It doesn't sound too bad. Maybe another week and they'll be pals?

Oh Herman I'm sorry that Emma doesn't want you to play with her. Guess you will just have to have a little more patience. I'm sure she will come around eventually. She's a cute Sister and your such a nice ManCat with her. We want to thank you all very much for your purrs and prayers for Patches and so glad it turned out on a up note. Thanks again.