Emma Has Come Out 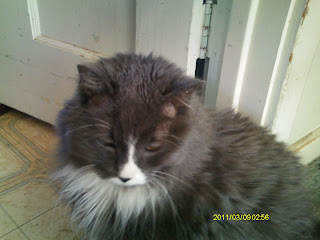 I am waiting by the kitchen door for Emma to come out into the larger part of the house.  So much has been happening and lazy Mom hasn't been blogging about it.

Karen Jo: I have been very tired lately.  We can make a nice, long post today to let everyone know all that has been going on.  Tuesday morning I was in Emma's room, petting her while sitting on the couch with her when Herman came into the room.  He sat down about two feet away and just looked at Emma.  I set her down on the floor right by my feet just to see what would happen.  Herman walked up to Emma and they actually touched noses.  Then Herman decided to get personal and sniffed Emma's tail.  Emma growled softly at him and he backed away just a little bit.  Herman darted out a paw and touched Emma's paw.  Emma hissed softly and Herman turned around and left the room.  I did a bunch of stuff that needed doing and was feeling pretty tired by four o'clock or so.  I decided to play with Herman and/or read in the living room for a while.  I opened Emma's door to see what she would do and, after a while, she came out.  Unfortunately. Herman went charging down the hall and scared her half to death.  Instead of ducking back into her own room, though, she ran under my bed.  I went to sit on my rocking chair and Emma came out after about five minutes and started inspecting my room.  After about 15 minutes, Herman came in and watched her.  Emma would find a place she liked to sit and Herman would walk up to her.  Emma would hiss and Herman would back off. After the third hiss, Herman left my room.  Emma left shortly after Herman did and went back to her own room.  I closed the door, thinking that she probably wanted to be left alone after her big adventure.

I don't know why she doesn't like me.  I like her and I haven't ever done anything to her to scare her.

Karen Jo:  Not deliberately, no. Charging down the hall at her full speed did scare her, though. Wednesday was just like the other days with Emma in her room and Herman outside. Today was Emma's big day. 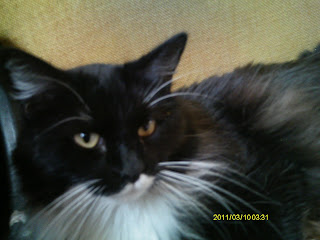 Karen Jo:  Emma is sitting in my computer chair.  Herman got me up at 6:30 this morning for breakfast, so I fed both him and Emma.  Then I closed Emma's door again.  About an hour later, I heard a big discussion going on in front of Emma's door, including a kitty pushing on the door.  I thought it was Herman trying to get in. When I finally got up for the day, got dressed and went to check on Emma, I discovered that the latch on Emma's door hadn't engaged, so the kitty pushing on the door had been Emma trying to get out, because if Herman had pushed on the door it would have opened.  I opened Emma's door and she came out and she has mostly been out all day.  She goes back into her room periodically, basically to eat, drink and use her litter box.  She has ventured down the hall almost to the living room, but the sight of Herman always stops her from coming all the way into the living room. She is still a bit afraid of him.  Mostly she has been hanging out in my bedroom.  Herman has come in a couple of times, but she still hisses softly at him every time he gets too close.  I am happy to report that too close now means withing touching range.  She started out hissing if he got within two feet of her.  I have also discovered that Emma will play with the Cat Dancer for short periods of time.  Things are looking really good and I don't think Emma will be behind a closed door any more.

Things got interesting at Mom's dinner time.  Tonight was steak night and, as usual, Mom ate her steak while watching TV in her room.  Emma was sitting on Mom's computer chair and I was sitting at Mom's feet.  I got three bites of steak and Emma got one.  There was no hissing at all.
Posted by Karen Jo at 9:35 PM

Herman, she's new, just dont SURPRISE her, thats all... Sitting quiet nearby and watchin her is the best thing.

I think you two are doing great! I am happy for both of you!

Lots of progress! I am sure Emma will warm up to you eventually, Herman - you just have to be gentle with her, which you are mostly doing.

Aww, and the last two sentences are just so sweet.

This is excellent progress! Herman, we know you want to be full on chums with Emma, but you have to take it easy, no chasing plz. You have done really well so far.

We think if you just had one tiny treat when your Mom comes home that would be good. Just the one though!

Aww, Herman! She'll love you soon, you're impossible to resist!

Way to go Emma and way to go Herman. I'm so glad you're getting to know each other!!!

Oh, wow! We're doing a happy dance for Emma (and you, Herman) right now! This is *wonderful* progress!

Wow! We didn't know you had a sisfur. We've missed so much!

It sounds like things are moving along well for Herman and Emma.

Us boys are having a difficult time adjusting to our new sister, Shelly......Sammy growls at her and doesn't move, so she doesn't bother him much.

Andy gets really spastic and growls and hisses and then turns and runs and of course she chases him.....and she loves to chase him so kinda stalks him at times!!!! Poor Andy.

We are working on getting some calming stuff for them.

Love to you...Herman...your new sisfur and your mom.

We are glad things are progressing well. Herman, we are sure Emma will soon stop hissing. Everything is still new to her at the moment.

Wow, it sounds as though things are progressing nicely! We think you and Emma are going to wind up being good friends, Herman, :)

Thank you for your kind thoughts and purrs during Maggie's illness, and then when she had to run off to the Bridge. We are so fortunate to have such wonderful friends on the CB.

Congratulations on your winning bid at the auction and a big thank you for your support in our FUNraising efforts to help out Bugsy and Gracie from The Happy Cat Family.

You won Item #21, The Pirate Socks! To make your payment, please go to the auction site, and click on the paypal button for Bugsy and Gracie on the Right side of the page. Be sure to put a note with the item# and your blog :)

We couldn’t send you our new auction supporter badge for 2011 since we don’t have an email for you, but you are welcome to pick one up from our auction page and put it on your sidebar and link to the auction if you would like.

That is fabulous. You will love having a sibling. I hope you have so much fun together!

PS Thanks for the birthday wishes. we'll see about the broccoli!

Herman
We are so happy at the progress with Emma. She is really a beauty and it will just take a little patience (and you have been a really good boy) with her.

Oh Herman, girl kittehs are weird like that. Dey dun like to be surprised and dey want to be the ones to sniff tail first. She'll come around, yoo jus wait and see!

Yeah, food is a great eek-wil-izer. When I, Speedy, came here I gots to sit in a big cage (yeah, a cage!) at night so I could see my sisfurs and dey could see me. Do yoo know dat Sadie stole food outta my bowl right thru da bars, but it was okay 'cuz I really liked her and if dat was how I was gonna win her over den I figgered she could haf some. Now we eat side by side and if Zippy decides she wants some stinky goodness I move aside and let her eat. I'm a gentlemancat. We bet Emma is gonna love yoo too, because yoo are being a gentlemancat and dat is good.

We are glad Emma is venturing out on her own!