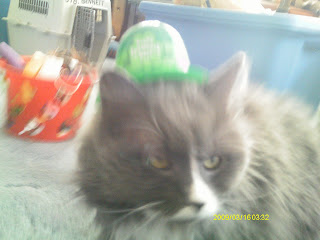 Thank goodness Mom decided to reuse this picture from last year instead of putting that stupid hat on me again.  I would like to see her try to put it on Emma, though.  That would be fun.  Mom has been acting really lazy and strange lately.  She hasn't even been going to work.

Karen Jo:  I am on vacation this week.  I have been really tired, so I have been resting and sleeping a lot.  I also had a pile of mail and newspapers to get through and I need to do my income taxes and clean the house. Sorry about not blogging, but I have been going to bed much earlier than usual.

Not a whole lot has changed between me and Emma.  We touch noses almost every day now and she only hisses at me sometimes. When Mom got up the other morning, I grabbed her warm spot and Emma and I ended up sleeping only about four inches apart.  I actually touched her with my paw when we woke up and she didn't hiss at me about it.  I tried to play chase with Emma on Monday, but she wouldn't chase me back.  I have started peeing in Emma's litter box.  I still poop in my own box, but I pee in hers. There is good news on the poop front.  I ran out of Centrine a week and a half ago, but I am still making normal poop.  Maybe my pooper has recovered from my illness last year.

Karen Jo:  I certainly hope so. That would mean that you are a healthier kitty and you won't have to take as many pills.  Emma had to go to the vet on Monday for her introductory visit.  I was glad to take her, as I had noticed that she was scratching and rubbing her left ear quite a bit.  It turns out that she has a yeast infection in both ears and needs medicine in her ears for a week, then back to the vet to see if that took care of the problem.  She is supposed to be wearing a soft E-collar, but there was no keeping her in it.  I let her out of her carrier in the living room, which she had never visited before, just to see what she would do.  She started exploring and Herman was just watching her.  When she found the hall, she ran down it, and Herman chased her.  She ran into her room and Herman stopped short of the doorway and waited for her to chase him back down the hall, but she was having none of that.  She was too busy kicking off the collar.  I tied it back on her and one minute later she had her front paw caught in the neck opening.  I tied it as tight as it would go and three minutes later she was wearing it for a skirt.  That's when I gave up on the collar.  She is not often scratching inside her ear, so I think it will be OK.  I have been tidying up the house, taking care of the mail and working on my income taxes all day and I am getting pretty sleepy, so I'll just say Happy St. Patrick's Day to all of you and end here.  I will try to do some visiting, but if I start falling asleep at the keyboard, I am going to bed.
Posted by Karen Jo at 12:54 AM

It sounds like things are going really well at your house, Herman! I bet it was funny, seeing Emma wearing that e-collar as a skirt!

I would like to see that too..heh..heh..heh
Could you please make it happen, Herman !

Yes, we thought that collar-as-skirt was pretty funny. Aside from the yeast infection, Emma seems to doing very well and this is great!

Happy St. Paddy's Day to you all!

Happy St Patricks Day to you all. We are glad to hear that Herman and Lucy are getting more used to each other - they'll be good furrends before you know it.
luv Hannah and Lucy xx xx

we are happy things are progressing well between Herman and Emma.

Since our sisfur came home from "The Spa" we have been getting reintroduced....Shelly is a lot calmer now so we are hoping her and Andy will rub along together well now. Please purr that they will.

May your troubles be less and your blessings be more, and Nothing but happiness come through your door. (an Irish Blessing)
Taz, Runt, Charles and mommy, Anna, in IL

Hope Emma's ears clear up real soon. We laughed about her wearing the collar as a skirt, bet that looked funny. Sorry Herman that Emma didn't want to play chase with you today. Maybe when her ears are well she will play with you then. Hugs and nose kisses

We hope Emma's ears get better soon. It sounds like you and she are doing alright.

Nice to meet you too.

If it helps anny, we have an inflatable collar that werks really good (none of us ever got it off or got a paw stuck in it. The Big Thing fergets, but thinks it was a small dog one from Petco.

What's en e-collar? And why do you have to wear one if you're an indoor kitty? Glad Herman's digestive system is working well on its own!