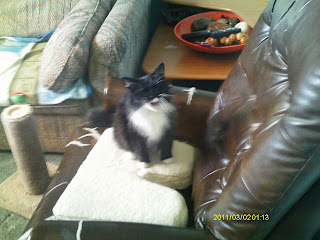 I would like to introduce all of you to my new sister, Emma.  I don't know how she got that name, but she has it now.

Karen Jo:  I was petting her this morning and said all the names I had considered for her out loud to her and Emma was the only one that seemed right.  She is doing well.  She got a bit active in the night, as I found the scratching post knocked over.  I hope that didn't scare her when it happened.  She ate some Kitten Chow and used the litter box. She is still a little shy.  I will be petting her and she will be purring up a storm, then she will suddenly jump down and go into her ladycat cave.  Herman has managed to sneak into her room a few times.  He got in this morning after her petting session when she had gone into her cave.  He approached the cave very slowly and she didn't react until he stuck his head in.  Then Emma hissed at him just a little.  I was ready to grab him, but, like the gentlemancat he is, he backed off by himself and left the room without any help from me.  Early this afternoon, he stuck his head in while she was sitting in the chair.  He meowed to her very softly and she pricked up her ears, but just looked at him.  I stopped him from going into her room.  I don't know whether to try harder to keep Herman out of Emma's room, or just him look in from time to time.  Will this help her get used to him, or upset her?  She seems fine with him unless he gets too close. 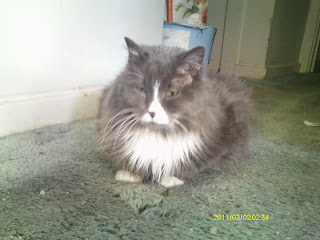 I am in the hallway, not far from Emma's room.  I want to go in there so badly.  I like her and want her to like me.

Karen Jo:  It will happen eventually.  Right now she is just a little bit scared of you.

Scared of me?  Why?  I never did anything to scare her.

Karen Jo:  When she was an outside kitty and the nice people were feeding her outside they noticed that the older, bigger cats in the neighborhood would come over and pick on her and steal her food. This is still fresh in her mind and you are an older, bigger cat.

So she thinks I am going to beat her up and eat her food?

Karen Jo:  I think that is a real possibility.

How can I convince her otherwise?

Karen Jo:  Just keep being nice to her.  As she feels more secure and realizes that there will always be plenty of food and you are not acting in a threatening manner she will probably stop being scared of you.
Posted by Karen Jo at 1:19 AM

Karen Jo, Emma sound like me ! Must be a tuxedo thing.
But it can be changed !!!
You have to train her to sleep at night !
What my pawsrents did to me is..they keep wake me up while I have nap in the late afternoon and drained me by playing with me. Do it for a while. By the time you know she will sleep in the same time as you : )

Don't worry, Herman, I get the feeling you two will be best pals very soon!

We are so happy to meet Emma! She is such a cutie. Herman, it'll take a little time, but she'll learn to trust and love her big brother soon!

Herman, Karen Jo is giving you good advice Herman. We are sure Emma will love you given time. She just needs a chance to relax, get used to her new surroundings and realize how wonderful you are. It won't take long we are sure.

Karen Jo, We thinks you should let Herman keep wondering it. She will let you know if Herman gets to close and Herman seems smart enough to leave her if she is upset.

Herman, yes, just give sweet Emma time. She's been traumatized by other cats, she's had a lot of upheaval...You *are* a true gentle mancat and we're sure that in a little while, Emma will learn to trust you.

Herman, a little patience! She will be snuggly in no time!! :)

Hello to Emma! That's such a pretty name, and perfect for a sweet, tuxie ladycat.

We think Herman is being a very good boy and given a little time, doing just what you are doing, they will get along fine.

Emma looks a lovely lady cat for you to have as your sisfur Herman. Just be patient with her and she will soon want to snuggle with you.
Luv Hannah and Lucy xx xx

That is a great name! Emma and Herman!

I am certain that as she gets to know you she will stop being afraid of you Herman!

Emma is so pretty, and hang in there Herman, after all, what's not to love about you!!!

Emma looks like such a sweetie! We think with a little time you two will be good friends. Let the LadyCat set the pace Herman; that's always polite.

We love the name "Emma"!

Herman, try entering the room and showing her yer belly. That should show her you arent ta be feared.

We think Emma is a perfect name. We bet that Emma and Herman will love being together very soon. Herman you are being so sweet as always. Hugs and nose kisses

Oh man, dood! These are the things I miss when the Woman is hogging all the computers with her "work." YOU GOT A SISTER!!! Very cool! I wanted a sister, but I got Buddah instead... =sigh=

Well hello Miss Emma.
YOU are certainly a sweet girl with a lovely face and beautiful tuxie markings. I know you don't know this yeet, but Herman is a sweetie pie. YOU will love him so much once you get over your shyness. Herman you have gained a wonderful sister.

Emma is very pretty and the name suits her.

I have been totally asleep at the switch on this! Good for you for getting a sister, Herman! Emma looks like a very lovely girl. Your mom is so sweet to open your home to her, too!

Emma looks very sweet! Like your mom says, Herman, just keep being nice to her and we bet she will like you!!

Oh wow, our mom gets da "bizzies" and alla sudden YOU HAF A SISFUR! Speedy wants to talk to yoo about it...Herman, sisfurs is great! Yoor gonna love haffing her around. Lissen, when I furst got here my sisfurs where kinda shy around me to but it din't take long afore dey loved me. I just know, if yoo is pashent and kind dat Emma is gonna love yoo. And fur sure yoo is gonna love her, sisfurs are sweeeeeet.

Hi, Emma and Herman. Have a great weekend. (And, Emma, I love your name!)

Well hello, Miss Emma! That is just about the perfect name for you, pretty girl. It sounds like Herman is going to be really good with her. The fact that neither are aggressive seems to me to be a great sign. The hisses, well heck, the hisses still happen here from time to time when one's space gets invaded!

A belated welcome to Ms. Emma. It's nice to make your acquaintance. Herman, remember how frightened you were at first and just take your time getting to know your new sister.
Sending snuggles to both of you.
Taz, Runt, Charles, and mommy, Anna, in IL