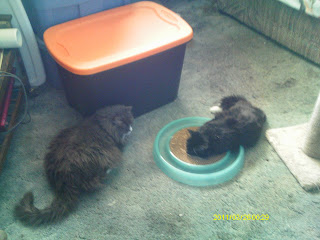 Sorry we haven't been around lately.  Mom got sick on Tuesday and hasn't felt up to blogging until tonight. Emma and I both lapped up all the extra cuddle time in bed.  Emma is all over the house now.  Nothing is safe from her.  She has been eating my food regularly and here she is hogging the catnip.

Karen Jo:  I put catnip on Herman's scratcher in the living room and the Turbo Scratcher in Emma's room.  Emma pounced right on it.  Herman got really close and there was a flurry of paws from both of them.  Emma retained possession of the catnip as long as she wanted it.  When she got up from sniffing and rolling in the nip to get something to eat, I expected Herman to go after the nip, but he didn't.  He just lay there next to it for a long time.

Emma:  I smelled the nip and I wanted it.  I am faster than Herman and I got there first.

Karen Jo:  Emma has been using her speed to her advantage.  It didn't take her long at all to learn the food routine in the kitchen.  Having discovered Herman's buffet and connecting the opening of the refrigerator with new food appearing, she has been beating him to the canned food regularly.  Today at lunch time, she beat Herman to his Medley and he just sat there and watched her eat it.  I put the Stinky Goodness right in front of Herman, but he still just sat there and watched Emma eat his Medley.  When I got back from putting out Emma's Stinky Goodness, most of the Medley was gone and Emma was going to town on Herman's Stinky Goodness. After she was done, Herman just looked at the damage, then looked at me and meowed sadly.  I picked him up, took him down the hall and showed him Emma's Stinky Goodness, which he ate part of.  When I got home from work, both cats came into the kitchen and Emma started eating some of Herman's Purina One.  I told them that it was supper time and picked up Herman's Medley dish to wash it.  Herman left the kitchen, which is highly unusual.  I found him sitting in the hall with his back to me.  I walked up to him, but he walked a few more steps down the hall and sat down with his back to me again.  I petted him and told him what a good boy he was and that he was my favorite mancat.  He followed me back to the kitchen and took up his usual position, right in front of where the Medley dish goes.  I put the Medley down right in front of him and he started eating. This time Emma just sat and watched.  I washed up and filled the Stinky Goodness dish and Emma dove right into that.  They ate side by side for the first time.  I hope this means Herman will start sticking up for himself a bit more.  He has been deferring to Emma in everything.  Both the Medley and Stinky Goodness dishes get licked almost completely clean every meal now.  I think Emma is eating more of it than Herman.

Herman:  I like Emma and I don't mind letting her have her way most of the time. She has almost stopped hissing at me. She keeps stealing my favorite spot next to Mom at bedtime, though.  Mom will make every effort to reach me wherever I lie down, but sometimes I get up and move away.  Once in a while, I will even get up while Mom is petting me and jump down from the bed to find someplace else to sleep.

Karen Jo:  I really hope that Herman isn't feeling displaced by Emma.  For him to leave the bed while I am in it is very strange.  He used to only get up to eat or use the litter box and always came right back.  Sometimes Emma decides to sleep on my other pillow and Herman will take up his favorite place next to my chest.  I feel that this is just something that they will have to work out for themselves.
Posted by Karen Jo at 1:05 AM

Herman, you are so polite with Emma! I agree with your human - you need to stand up for yourself a little bit more! Emma shouldn't know she can walk all over you.

Herman, it's really great that you are such a well-mannered mancat but FOOD is FOOD! It's nice to share but don't let her eat all the good stuff, man! Perhaps, a well placed "whawp" to the ears might help keep Emma out of your food and/or toys.
And, Miz Emma...we're happy you are getting settled in but that's no reason to scarf down Herman's good stuff...a small, lady-like taste, now and then. And, remember, you are new and Herman may still box your ears, when Karen Jo isn't around.
We are happy to see both of you becoming more comfortable with one another.
Sending snuggles and purrs (and a little whack) to both of you,
Taz, Runt, Charles, and mommy, Anna, in IL

Yes, you are very gentlemanly, Herman, perhaps a bit too much so. But you just have a sweet and kind nature. The mom was laughing at the kitty dynamics. It can be hard, though, to realize that you have to share *everything* now, including favourite night time sleeping spots--and, of course, food!

Herman - a word or two of advice -
don't let being a gentleman cat stand in between you and your Medley or Stinky Goodness. All's fair in love and war but not at dinner time.
Luv Hannah and Lucy xx xx

Herman, we think you are being too much of a gentleman with Emma! Pretty soon she's gonna be walking all over you...and that wouldn't be fair!! We're sure you and Emma will work things out.

We agree with the others, there's a time when you can be toooo gentlemanly! Go for that food! Emma will learn.

Hi Herman, a younger sibling is a challenge. I agree with you. When they get a little bigger, or even bigger than you --- you can start shoving them around and show them who is boss no matter what.
Mom treats me like I am the boss, so I do not feel too threatened by Miles. He weighs a ton, but mom reminds me I am the boss.

bonks to all of you

We're glad to hear you two are getting along better and better, Herman. Please don't be afraid to stick up for yourself, okay? Being a gentlemancat is important, but don't let Emma eat your fuds or snuggly spot next to your mommy.

I am glad you are getting along better and that you human seems to be getting better too!

Herman
YOU are a true gentle mancat!
We are glad to see Emma coming out of her shell and we are glad too that things are going so well.

I am very glad your Mom is feeling better! Take it from me Herman, sometimes, when it comes to sisters, you've got to stake your claim! Trust me pal, I know!

Herman, it is no good being polite and standing back when there are brothers or sisters around. It's every cat for them-self! We are glad you are getting on better with less hissing from Emma.

It sounds like Emma is making wonderful progress. Herman, you are such a sweety to be so agreeble and let Emma explore and feel right at home in her new home.

Eating and sleeping habits are so habitual it is hard to understand what's happening when changes take place that we are not in control of.

Here's hoping all settles down with the two little ones. Our crowd is seeing changes almost daily with the same sleeping habits. Eating habits are all general here. We eat crunchy, bowls being available 24/7 in three places in the house, and it's first come first served with the thrice a week stinky goodness. Everyone has his own place to eat though. NO changes allowed.

Have a good week and enjoy.