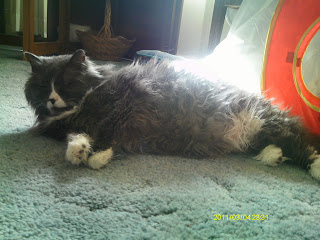 I am showing off my magnificent tummy again.  Mom isn't taking away all my treats, just cutting down on them.  After I regained my weight after being so sick, I leveled off at fourteen pounds and stayed there for a long time.  I only gained the last two pounds when Mom started giving me all the treats I wanted when she got home from work.

Karen Jo:  That was my fault.  I thought that the way you asked for more treats by reaching out a paw toward the treat bag or patting my hand or my cheek was so cute.  I was giving you a ridiculous amount of treats each night.  You were making a whole meal out of them.  This week I am giving you ten treats when I get home and next week I am going to cut you down to five.  Then we will see how it goes.  If the weight starts to come off, then I will leave it at that.  If not, then I will cut you down to two or three.  I do think that when Emma gets used to you and comes out to play, you will be getting a lot more exercise and that will help with the weight.  I do want to keep a couple of extra pounds on you as a cushion against the next leukemia flare-up.

Mom thinks that just having Emma in the house is good for me.  I am playing with my toys more and running up and down the hall a little bit more.

Karen Jo:  I do think that she is good for you.  It got so all you were interested in was eating, sleeping and seeing how many treats you could get.  The other day, you chased one of your balls all around the kitchen, which you hadn't done in months.  Almost every night when I get home I see that you have been playing with your toys at least a little bit. 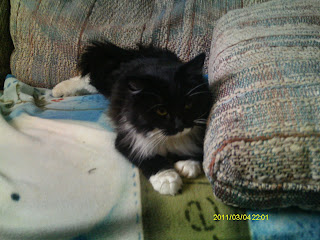 Karen Jo:  Emma stayed still for this picture, but it doesn't do her eyes justice.  I have never seen such bright golden eyes in a cat in person before, though I have seen some pictures on blogs.  Herman got about one foot away from her before she hissed at him this morning.  It was just a little hiss, too.  Emma has discovered the stairway to the top of the bookshelves and the kitten cozy that I put up there.  It's just some storage boxes stacked up, but it works to let her get up to the window so she can look out.  At present it's her favorite place.  To get down, she moves along the top of the bookshelves then jumps down on the couch. Tonight after I petted her a bunch, I picked her up and took her on a tour of the house.  She stopped purring, but she didn't struggle in my arms or start to shake in fear.  I think she was interested to see what was outside her room.  When we got back to her room, Herman was in there, of course.  He was really checking out the bed that I bought her, but I don't think she has done more than walk across it.  I sat on the couch with her and petted her for a bit while she watched Herman.  When she jumped down and went into her cave, I picked up Herman and we left her alone.  I think she is coming along very well.  Herman chirped at her today.  It wasn't anything like the way he chirps at birds, but more of a questioning sound.  I am hearing lots of sounds from Herman that I have never heard before.
Posted by Karen Jo at 12:43 AM

Sweet picture of Emma. Herman you are still being so sweet with Emma. She is getting more comfortable by the day. It is good to hear that you are playing with your toys more now. Emma is doing so well getting adjusted we bet very soon now she will be running and playing with you.

Herman, I think your human is right, and that Emma is already a great influence on you!

Herman, though I think you need to cut way back on your treats, I would not personally be too concerned with the extra 2 lbs of weight. You can use the reserve! I wonder, also whether the prednisone causes you to old some extra fluid or weight.

Emma looks lovely. I think you two are going to be wonderful buddies in a little while.

We hope we will see some pictures of you playing with Emma soon - it looks as though she is settling in well. We're sure you will have such fun together.
luv Hannah and Lucy xx xx

Herman, it's gonna be nice to have another cat around the house for you!

I think that as they get to know each other they will be good friends!

It won't be long till they are playing!

Herman, we are glad you had a good report from the Vet :)
It is wonderful that you have a lovely new sister!! Emma is very pretty. We hope you two have fun together!

Thank you for your purrs for Mickey.
He could use them.

I think you are your sister are doing great Herman, you two keep it up!

Herman, you are such a sweetie!! We love how you are so interested in getting to know Emma, and being so gentlemanly about it, too!

Thanks for coming to Cookie and Caramel's Birthday Shedding Party! We hope you had fun!

We think Herman and Emma are getting along quite well for at first. May it continue!

Herman you sure have a cutie for a new sister. Emma is a good name for her. It is so good to hear that you are doing so well now. It sounds like that if you are making new and different sounds towards Emma that you like your new sister. Sometimes it's fun having other kitties in the household with you.