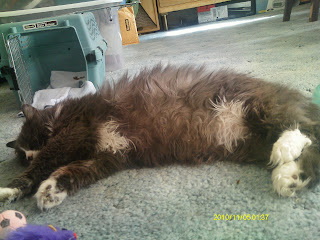 Mom apologizes for using the same picture of me with my toy bucket twice in just a couple of days. This was the picture she meant to use yesterday, but she forgot to uncheck the "put it in a new folder" box and she couldn't find it.  I had just gotten a bit of playtime with my toys after I got my nasty medicine and I was pooped out.  I didn't even eat all my treats, as you can still see some in the PTU in the background.  My fur is getting all stick out all over again, but this winter it still has a shine to it, so Mom knows that it is just the dry weather and the dry air from the heater making it do that.  Mom has some news on the kitty girl.

Karen Jo:  It isn't the news I was hoping for, but it is still great news.  The kitty girl was adopted over the weekend.  The lady at the shelter said that she was amazed at how many people showed an interest in adopting her.  It looks like more people are now willing to give kittens with problems a chance.  My name has been added to the list of people interested in adopting cats with feline leukemia, so I may find out about another one some time.  It has been my experience in life that cats who need me have a way of finding me.  That brings me to a dream I have had twice now.  Each time in the last year that I have decided that I was really interested in adopting a cat, I have dreamed about a part Siamese or part Himalayan cat.  The first time was just before I found Herman and the second time was just after I found out about the kitty girl and had made up my mind that adopting her would be a good idea.  I have no idea if it means anything, but I find it interesting.

I chased a fly all around the kitchen this morning.  I almost caught it, too.

Karen Jo:  You could have caught the one I found swimming in your water bowl.

That would have been too easy.

I got some really nice cuddle time this morning.  Mom isn't quite used to the new time yet and woke up an hour early, so she spent the extra time listening to the radio and petting me.  After she got home from work, I ran up and down the hall twice, just to let her know that I was ready to play.  And play we did.  I used to just play with one toy for a few minutes, then I was done playing for that session.  Now I will play with a toy, get tired of it, go to another toy and play with it and even go on to a third or fourth toy.  My play time has gone from 1-5 minutes to 5-10 minutes.  I even run after toys and keep whapping them time after time, which I rarely did before. Tonight I was celebrating that I didn't have to take the nasty medicine today and I won't have to take it any more until next month.  I feel so good that I am just bursting with energy and fun.

Karen Jo:  I have some news for you.  I just heard from The Friends of the Shelter and their calendar is out and you are in it.

Yay!  Now you have to get a photo in for the PAWS calendar.  I want to be a big time calendar cat.

Karen Jo:  I will do that tomorrow, Herman.  I have so many pictures of you that it is going to be hard to choose, but I will do it.
Posted by Karen Jo at 1:05 AM

Concatulations on getting your photo in the Friends of the Shelter calendar, Herman! I am glad the girl kitty found a home, even if it was not with you. I know that the right kitty will come along at just the right time. We kitties are all about timing.

You will be an important "Male Model" now Herman - will you still speak to us riff raff? Can you mom show us the picture that the calendar people used?

Wow Herman, you're a calendar cat! Congrats my friend!!!

I think you will find yourself the perfect meeze! In fact, can I send you Ichiro?

Concats on being selected as a calendar model, Herman, you handsome dude!

We are so happy to hear that the kitty girl found a forever home. We are purring and praying for a kitty that is purrfect for you two comes along when the time is right.

Your going to be famous!

Oh we are happy that another kitty found a forever home, especially one that in some eyes is not considered 'perfect'. We think that there will be another kitty to find it's way into your heart!
Herman concats on being in the calender that is fabulous!

We are glad that you are playing more Herman. Its great exercise. Does mom toss the toys around or do you chase them around on yer own?

Hey, Herman! We're glad you're enjoying your playtime!! And we're glad the girl kitty found a home...we hope another kitty comes along for you soon!!

WE are sorry you did not get the kitty girl, but happy for her that she has a home

You have a very special mom. It's so wonderful to read about your adventures and conversations. You are truly loved.