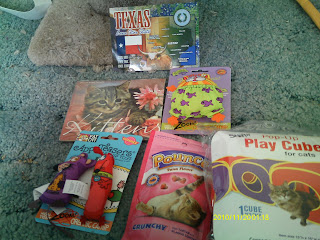 Just look at all this cool stuff!  My prize package from the Halloween contest arrived today from Samantha and Clementine of Life from a Cat's Perspective on behalf of the New Tuxedo Gang.  There was even a kitten calendar for Mom. 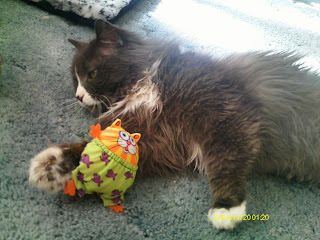 I started to play with this one as soon as Mom got it off the card.  What's really cool about this cat is that you can stuff his swimming trunks with catnip.  Now Mom has to get me some new nip. We ran out and I feel deprived.

Karen Jo:  Oh, poor you!  You haven't used up all the nip I put on your cardboard scratcher and your Turbo scratcher yet.

I was interested in the cube until it scared me.  Mom had taken it out of the package and was unfolding it when it made a loud noise and popped out of her hands.  I went and hid behind my platform and wouldn't come out for a long time.

Karen Jo:  They aren't kidding when they call it a pop-up cube. It popped half-open.  I finished opening it, but I don't think Herman has gone near it yet.  I tried scratching on the back of it to interest him tonight, but he knows that trick.  I'll put some treats in it tomorrow to see if he can get over his distrust of it.

There were some new treats in the package.  I haven't had Pounce before.  Mom opened up the bag and gave me one when I came out from behind my platform.  I like them.  I played with my mousie and my doggie toys with Mom after she got home from work tonight. Thank you so much, Samantha and Clementine and everyone who voted for me.

Mom was hard to get up this morning.  I really had to work at it.

Karen Jo:  It was pretty strange.  Herman knows that I have to get up when the alarm goes off.  It seldom does go off because I usually wake up a half-hour to an hour early and turn on the radio, then just doze until the alarm is ready to go off, then get up.  This morning I woke up an hour early and turned on the radio, after I made sure that Herman's food was OK after his early morning feeding.  Then I zonked out completely.  I was deeply asleep when the alarm went off.  I turned it off and threw off the covers, then zonked out again and started dreaming.  I dreamed that I was in my underwear, sitting on the side of the bed and putting on my socks. Herman kept sticking his claws in my butt and I kept turning around to tell him to knock it off, I was up already.  I finally got really irritated with him and gave him a sharp rap on the head with my knuckles (which I would never do) and he began to cry.  I woke up then and sure enough, Herman was sitting right by my butt, looking totally innocent.  I don't know if he really cried out or not, but since he is so vocal, he probably did, out of frustration.  I usually get up at the first hint of claws.  He did a good job, as I got up only 15 minutes late.
Posted by Karen Jo at 12:52 AM

Herman, your mom had the winning bid for auction item #2, the holiday kittie toys. Please let her know she can pay via Derry's PayPal button on the auction page, and then our mom will let the donor know the item can be mailed out (need your correct mailing address).

Herman, nice job on being the back-up alarm system...What would our humans do without us? We shutter to think about it!
We really like the Pounce here too, but mommy hasn't been buying them lately, as Runt is not supposed to have anything with wheat gluten in it. We don't understand why we all have to suffer but mommy says that's the way it is and since we can't get the car keys from her, we guess we have to deal with that.
Sending snuggles and purrs,
Taz, Runt, Charles and mommy, Anna, in IL

Those are some cool prizes, Herman! You should give that cube a try. It's a great spot to nap. Have your mom put a blanket or something in the bottom to make it even more cozy!

Herman you got some great prizes - its a good thing that you woke your mom up when again when she fell asleep again - you might never have got your brekkie!!

that kitty wearing the swimming trunks is adorable! Love that you can stuff the trunks with catnip....wonder if hooman men will try that to improve their "package?"

Fantastic, what a lot of loot you got there. That will keep you busy for awhile playing away. Way to go!

Those are some great toys and treats; we hope you have a fun time enjoying with all your new stuff...You are such a great alarm clock, Herman; we do the same thing for our Mommy and don't really understand why she tries to sleep in on the weekends when she should be up getting our breakfast=we jump on her at 5 am every day just to remind her...Happy Sunday, sweet friend...xoxo...Calle, Halle, Sukki

Those are awesome prizes, Herman!!

Herman, your cube will be OK...it's not gonna eat you or anything!

You got some very fun loot!

Good job getting your Mom up, we hope you really DID get to do some butt-poking. It's our dream to do that to Mommy.

WOW you got a fantastic pile of goodies!
bonks for getting your mom up with a prick on her butt! my mom has had those dreams where she is out of bed and doing things haha silly beans

Miles is nutty about cubes.
bonkbonkbonk

That is a cool prize package. Mac got his from Samantha and Clementine this week too. Mom will be posting the pictures soon!

Very nice prezzies! We LOVE the catnip toy. That was good of ya ta wake Mom up from her weerd dream, too!

enjoy your prizes! They look like lots of fun =^_^= purrs2u

Pawsome prizes and good job waking up your Mom!!

You sure got lots of cool stuff Herman, have fun my friend!

Hi Herman!! So glad you liked the kitty things and treats we sent!! And so sorry the Cube scared you!! Give it a bit of time and we know you'll love it!!
Your TX Furiends,

ManOcat...what a haul! We gots one of those kitties in undies but our Teri frew it out cuz it looked like he pooped his pants kinda (from us getting the nip in his drawers all soggy!