The Rest of the Party 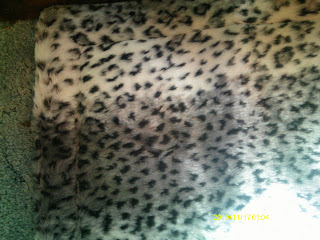 This is my Gotcha Day gift. It's a warming mat.  There is stuff inside that reflects heat back to keep me warm this winter. 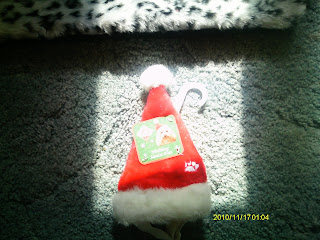 This was in the package, too.  I don't know what it is, but the white ball on the end is fun to play with. 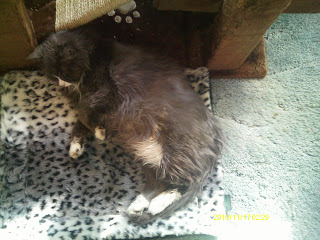 Here I am trying out my new warming mat.  I love it.  It has become my favorite nap spot.

Karen Jo:  First, many apologies.  I had intended to keep on posting about Herman's Gotcha Day Party after I woke up again after the breakfast post.  For some reason I have been incredibly tired recently and I just didn't have the energy to post again until now.  All I can think of is that my still-working-but-woefully-inadequate thyroid gland is doing its job very irregularly.  That said, here is how the rest of the party went.

I finally had to go get Mom up because all the kitties were getting hungry again and Roxy wanted some broccoli.  We had ham, turkey, chicken, a whole salmon and the biggest shrimp ring you ever saw, plus some broccoli.  After making sure that all the food was out, Mom got out the wand toys for a while.  Some of the kitties wanted pets and scritches before their afternoon naps, so Mom was kept pretty busy.  The sun came out and melted most of the snow, but it stayed in the shady spots.  Then the wind came up and it got pretty nasty outside, so we all played inside. There were toys scattered all over the house.

When it got dark, Mom brought out tuna cake and nip ice cream.  Then she mixed up huge batches of niptinis and meowgraritas. Some kitties played with my flashy balls in the dark hallway.  We put the music on and danced and played until we dropped.  One by one the kitties and woofies teleported home after their post-party naps.  Thank you all for coming.  It was a great party.
Posted by Karen Jo at 12:51 AM

It sounds like you did well for the party Karen Jo. Sometimes it is hard to get over being tired...

Boy, how did I miss that one? It sounds like you all had a wonderful time. I've heard about those meowgaritas!

Have a good weekend!

We enjoyed your pawty Herman - btw your mum mixes a potent nipitini!!
Thank you for inviting us - it was nice seeing you and chatting with our friends.

That was a great party. We had a lovely time. Your warming mat looks very comfy.

That really was quite the pawty Herman! That warmer looks like it will do the trick!

Thanks for the great party, Herman! That mat looks great - I would like one myself (hint, hint to my human!). As far as that thing with the fun fuzzy ball on the end... be careful, it is a trick!

Happy Gotcha Day, sweet Herman....and we purray you will have scads more of them.

We luvs ya and Karen Jo.

Oops, we missed your pawty but it sounds like it was wonderful. Happy belated Gotcha Day. Enjoy that wonderful mat :)

Herman, we had a great time at your party!

We're reciprocating today, Sweet Pea is throwing a bash for her third gotcha day! Come on over if you can.

what a wonderful warming pad you have!
That was so nice of your Mom to get that for you, you will be toasty warm this winter!
Your pawty was soooo much fun!
Hope you have a wonderful Caturday and we hope your Mom feels better soon!
Caren and Cody

It was a great party, Herman!! And what a wonderful Gotcha Day present you got! That warming pad looks so cozy!!

Herman
We really enjoyed your party.YOU are pawsome and what a great Gotcha Day present. That is just purrfect for you.

We are sorry we missed the party, it sounds like a wonderful time was had by all.
We like your Warming Mat!!
~ The Bunch

Burp! Thanks for the broccoli, Karen Jo! And honestly, I never knew Lucky could dance like that.

Thank you for your kind words on Gatsbi's passing over to The Bridge. She will be missed a great deal around here. It would be nice to see a limerick for her.

Luf, Us and Maw

My boys love their warming mat too...I'll have to pull it out now that the weather is getting a bit cooler!