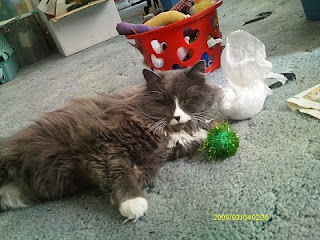 Karen Jo: I am so sorry that you don't like having your medicine squirted in your mouth, Herman, but you might as well get used to it. You are going to get it every day for the rest of your life, which I hope is a long one. I could use some advice about giving Herman his medicine. I know that I have to remain calm and not make a big deal out of it. Herman does not like to be held, so I have been just holding his head steady while I stick the syringe in between his teeth and squirt in the medicine. I know about the cat burrito trick, but I don't want to resort to that if I don't have to. I think Herman would really, really hate that.

Some kitties wanted to know how I react to being in a car. I meowed softly all the way to the vet and all the way home. The only good place I ever went to in a car was my forever home. I love it here and I don't want to leave.
Posted by Karen Jo at 12:23 AM

Rumblemum here... our vet suggested scruffing the boys when we need to give them pills/medicine - apparently it (a) doesn't hurt them (my first concern!) (b) is similar to what they're used to from their mums when they were kittens and (c) it releases some kind of calming hormone. Have you tried that?

Good luck with Herman, and good luck to you - I bet it's even harder on you having to give him medicine than it is for him to take it.

Herman, you Mom is right, you are going to have to get used to that daily squirt.

Our Gerry is on Interferon, daily and soon to be alternate days. When he went onto it, he had been through very rough times (terribly terribly ill) and he could put up a fight, so we had to find a way of getting him used to having medicine without any kind of force. Stress is the main thing to avoid in cats with viral issues of ALL kinds.

We use a two ml syringe (his dose is 1ml, but a 2ml syringe is much easier to handle than the thin 1ml syringes or the bigger ones)and have attached a soft plastic 1ml(bendy) pipette end to the syringe, so it doesn't hurt his gums when we put the syringe to his mouth. Your vet or maybe a drug store will have soft plastic 1ml pipettes. Just nip the end off and slide it over the syringe end. Mouths get bruised easily when syringing anything into a cat's mouth and you want Herman to associate good things with his medicine, not ouchy stuff.

Gerry gets a reward immediately after his Interferon. His reward is a small bowl of Whiskas Cat Milk. You would need to find something that Herman really loves. The key with the reward is that it's immediate. That way Gerry learned that as soon as the squirt was done he got something good.

Now Gerry jumps up onto our laps to get his medicine and opens his mouth ready - but back when he was learning I'd pick him up, sit in a low soft chair and put him to my side so he was lined up between my thigh and the chair arm. He hates his mouth being opened by force, so I'd just hold his head with the flat of my hand on the opposite side to me so he would lean into the pressure like he was being petted. If he was upset, I'd just give lots of gentle pettings, until he calmed again, then put the syringe up to the corner of his mouth (syringe facing forward, not back) as his mouth opened in reflex, I'd squirt in the Interferon. Immediately pet him, lots of soft praise and let him jump down to his bowl of cat milk.

It took about two weeks for him to get the hang of it. I can't emphasise how important it is to avoid stressing a cat with a serious virus out - Gerry would turn himself inside out if we or the vet attempted to scruff him, some cats will really fight scruffing. Scruffing releases endorphins and encephalins and even though these are the body's natural pain killers it's a big deal to be stimulated this way for a cat with a virus like FeLv and it's best to avoid it if you can. Gerry had been so ill we just couldn't risk that level of stress because the calici would strike again.

You could try clicker training too - plenty of good dvds and books available. Some cats really take to it well and it makes giving medicines easy.

Best of luck Karen-Jo. If you want to try the soft pipette ends and can't find any. Email us (address in our profile) and we'll send you some (We have a huge box of them here)

PS: Syringing into the side of the mouth (corner of lips)avoids the medicine hitting the back of the mouth, which we found is the bit the cat really hates.

Sorry we didn't mean to write a book ;)

Whicky has some awesome advice! I hope it helps you, Herman!

We hope this gets easier for you Herman. We really have nothing to add that Whicky hasn't already said! Great advice!

I hope this gets easier for both of you, too. I had to syringe Annie for a month or so a few years ago (she can't be pilled), twice a day, and it wasn't pretty. And she's NOT food motivated. I hope we never have to go through anything like that again. I take it that this is not something that can be compounded into a gel and applied to the inner ear tip? I am doing this now for Annie, twice daily, with her hyper-t meds. But of course you can't do that with every med....

I'm sending lots of positive vibes to you both, though, and (((hugs))) to Karen Jo.

It looks like Whicky has given you some wonderful advice! We think you'll get used to it quickly, Herman. Your Mom is trying to help you!

Whicky has given you some very great advice. Nicky does not like to be held in the position that I need to hold him in to get his medications in him, so whenever he's on the table near his food bowls, I go over and give him some pets and nosekissies and nuzzles, and then when he's relaxed and purring I can just slip the syringe in and give him his nasty medication. Then he also gets a treat immediately (and it amuses me because it's a pill pocket. i wish they had the antibiotics in pill form because he loves those pill pockets)- MeezerMomMary

Hi Karen Jo & Herman! Thanks for visiting my blog! Herman might like the squirt a bit more if you added fish sauce ( find it in bottles in the Asian foods section at the grocery store, also at Whole Foods) it is super smelly, you only need a few drops. I have found this drives many cats wild and is easy to add with a syringe to liquid meds.

We saw some really good advice and have nothing to add to it. Except, Herman, please relax and take your medicine so you can have a long and happy life. We love you.

Oh Herman it will be ok one day the medicine will stop and you will feel tons better! Maybe your mom can get one of those bags for you. Whenever I need medicine it takes a two person team...one to hold me and one to administer I wish your mom luck

Sounds like some good advise, we take ours really good so we're of no help. Be cooperative Herman, you'll feel lots better!

I would suggest woo take your meds like a good khat or Merdie and I will khome help hold woo down!

Not much to add to Whicky & Jane's post. I hated my squirty at first too. More than my insulin. But I gets used to it. I'll do pretty much anything for a few temptashuns!
Good lucks-TK

Yeah, I empathize but you'll need to get used to it Herman. Maybe a bribe of temptations helps?

Hope you feel better soon so that you can enjoy all your toys once again.

Oh it stinks that you have to get the medicine Herman, but we all really want you to take it so you will be healthy!

Ok, mom here. Before Floyd went to the bridge he was on meds twice a day (pills and liquid). I found that it was easier to give him if I had him next to me, facing the same way, and kind of tilted his head back to give it to him - facing each other didn't work with him. I find it much easier to use a dropper instead of a syringe type, but it depends on the person and how fast you can do it. The treat thing is also something I used for Floyd. Most of the time he took his meds no problem. His brother, who I am having to give antibiotics right now, is the opposite - he fights no matter what you do. I do have to use the klaw kontrol bag (like a kitty burrito, but easier, at least for me, because I don't know how to do that)and he still really fights, but it is much easier to handle him. He gets fed immediately after so it is kind of like a treat.

We are sending lots of purrs - hopefully Herman will start to tolerate it again!!

Good luck! We have no luck in giving meds to our two!

That's great advice from Whicky. Herman, we hope you get more used to that squirt. We know it's yucky, but your mom (and all of us) want you to live a long and healthy life!

Poor Herman! Medicines are no fun! Samson had t get lots of medicines when he had a bad cold, even medicines for his eyes! I hope you feel better soon!

I stopped by to let you know that I have given you an award! I always like reading your blog, us gray kitties need to stick together!
Please stop by my blog to pick it up!

Have a good weekend!
-Monty Graycat

Yup, Whicky gave some great advice. Da only squirty medisin we ever had here was dat yummy pain medisin and when each one of us was on it we actually came running when mom got out da surinj so we're no help!

Wow, you got a lot of good info! We don't really have a lot to offer, since the only long-term meds my mom had to give was to Sophie, and mostly that was subQs. She was so little though that Mom had a little bunting for her--Sophie didn't like it but was pretty resigned. One thing, though--if Sophie really didn't want to go through with it, Mom would let it go. She thought it was better to skip it than to stress her.