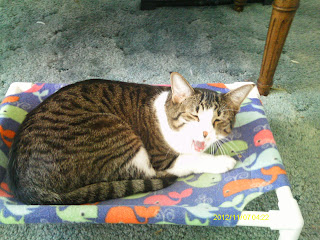 Karen Jo:  First of all, I want to thank each and every one of you for the huge outpouring of sympathy and comfort.  It does my heart good and helps with my grief enormously.  I will come around and thank each of you separately, but it will take a while.

Spyro:  Mom caught me just waking up from a nap in my ham-mick.  Mom says that after Herman's Gotcha Day she is going to rename this blog Spyro's Spytower.  What do you think of that?  I like it.

Karen Jo:  The URL will remain the same, just the blog name will change.

Spyro:  Mom isn't putting out as much food.

Karen Jo:  I figured out how Herman managed to gain weight on his diet.  I was putting out a half-cup of dry food for each of you and it all disappeared.  This morning I noticed that the two of you didn't eat all the dry food.  Herman was eating more than his fair share.  Today I put out one-third-cup of dry food each for you and that seems about right, at least for now.

Spyro:  I miss Herman.  I went around and really sniffed the places that he used to nap.  I know what happened to him and that he won't be back, but I wanted to smell him again.  I used his litter box just a little.

Karen Jo:  I scrubbed out Herman's litter box and put in all new litter.  It needed it anyway. 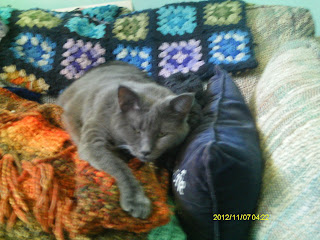 Oja:  Surprise!  I am back in my room.  I found this great pile of stuff to nap on.

Karen Jo:  The once-forbidden room was my parents bedroom.  When Mom died, I picked up all the stuff connected with her last illness and just dumped it all in that room, along with anything else I needed a place for.  When I finally cleaned it up, I took all the wraps and shawls and dumped them on the couch in Oja's room, thinking that the kitties might like them.  Herman discovered it about a week and a half ago, then Oja found it and last night Spyro tried it out.

Oja:  Last night in bed I had Mom all to myself all night.  It was great.

Karen Jo:  I didn't even need to call out, "Bedtime!"  Oja was already on the bed, just waiting for me.  She curled up next to me, a little closer to my head than Herman did, and waited for her petting.  We had a great time together.  Spyro slept in the rocking chair next to the bed, as usual.  Also as usual, when I woke up they were both down by my feet.  No kitty woke me up at dawn for breakfast.  I think maybe Spyro will take over that job or maybe they don't really care what time they get breakfast, as long as they get it.

Spyro:  Mom locked me up in the human litter box room.

Karen Jo:  I have to lock up Spyro when I take out the trash because I can't both carry the trash and keep him from running out the door.  I didn't have the heart to lock him up in Oja's room, as I usually do.  Maybe I'm just being silly, but I just couldn't do it.

Spyro:  It's OK.  I have my litter box and water in the human litter box room.  I can play footsie with Oja under the door, too.

Karen Jo:  Spyro loves to drink water out of a glass, so I keep a plastic glass with water in it on the sink for him.  Thanks again, everybody and a special thank you to Anne of Zoolatry for the lovely graphic of Herman. I put it up on my sidebar, but you have to scroll down a bit to see it.
Posted by Karen Jo at 5:54 PM

We like the new blog name! We're heartened to hear that the three of you are adjusting to Herman being gone. He would want that, we think.

so, so sorry for your loss.

I like the new name. Although I will miss Herman lots. I am still sad he is gone, and my human is too.

We think the new name is great. We will always remember Herman and miss him already.

We like the new bloggie name, too. We are also glad you have gotten so much support in your time of grief.

When Emma went to the Bridge, Carmine would stand at closets and meow for her like she was in one of them. Kitties definitely grieve, too. Give your babies lots of love. We know it is so hard, but you will all pull through this.

Purrs and hugs,
Carmine and Milita

Aw, the new name is going to be cute! Everyone is adjusting, that's good, not that it's that fast or easy.. But at least they are making progress.
I keep a glass on the bathroom counter for Star too. Of course, Leo likes it, but it's still Star's glass.

I just read in the Cat News that Herman went to the Rainbow Bridge ! I had to come here to read what had happened. So sad for you, I know what it is loosing a cat. Fortunately he had 3 wonderful happy years with you !
You will never forget him of course, he will always stay in your heart. In some way it's good for you that you have the two others, otherwise the house would seem awfully empty. I feel so sorry for you !

I couldn't even begin to tell you how sad we are that Herman had to leave. Alasandra also did a beautiful photo tribute to Herman too. Hugs from all of us.

We, too, still are deeply saddened at Herman's passing. It will take a while for everyone to adjust, of course.

We like the new blog name too...but what about Oja?

Nice to hear your news and to know that you are doing ok. It will take time but you will get there.. Hugs coming your way.. GJ xx

receive my hugs! love you!

I really like the new name you chose. Very clever.

I also like that hammick. I need to get one!

oh no. i just read about herman. my heart goes out to you.

We are very sorry to hear about Herman. FeLV can be like that. Our Riley was fine, and then suddenly he wasn't, and then he was gone. Five years isn't nearly long enough, but can be a long time for an FeLV positive cat. We have to think the extra care you gave him made all the difference. Sending you purrs.

It will take some time to adjust to Herman being gone and we know your heart aches as does ours. We will purr...

THe new name is great!

We miss Herman so much, but we do like the new name you've chosen. We send lots of hugs and comforting purrs and prayers.

The new name will be very nice, just too leaky eyed right now along with you. But I love Oja lots too and hope she will get some bloggy time. Paw pats, Savannah