Not Quite So Sad 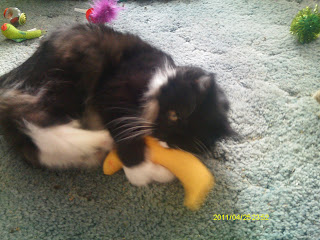 Poor little Emma got shortchanged once again.  November 19th was her Bridge Day.  I was going to make a post just for her on the day, but I started crying again and I couldn't see to post.  It's been a year now since she left.  Somehow it seems an eternity and just a little while ago at the same time.  I chose a picture of her at play because that's the way I want to remember her.  She so loved to play, both with toys by herself and especially with Da Bird.  Every night after I got home from work and fed her and Herman, I took a little time to get in my PJs and rest a little, then I would go into the living room and get out Da Bird for a session with Emma.  We had such fun together. 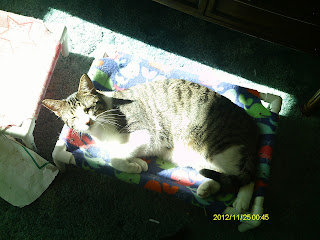 Spyro:  We have been having sunny, but cold weather.  I know it's been cold because I have been escaping and find that I don't like it much.  Mom doesn't even have to come get me. After only a few minutes I go back to the door and demand to be let back in.  I love catching the rays in my ham-mick.  Mom has been tossing me out of her bedroom and closing the door.  I don't like it.

Karen Jo:  I have only done it twice.  Once a few days ago when you began attacking my pajama legs and your claws were going through the material and hurting me.  You just wouldn't stop it, despite my pushing you off my legs and petting you and trying to get you interested in something else.    After five minutes, Oja started crying at the door and I opened it again and got up for the day.  The second time was today when you were helping me make the bed.  I don't mind it when you attack the sheets and blankets and let yourself get covered up.  However, this morning you attacked the blanket where I was holding it and made such a deep hole in my finger that I had to get a bandage to stop the bleeding.  I let you back in as soon as I finished.

Spyro:  I still don't like it.  The traffic at the bird feeders has been very interesting.  We had some little animals as well as birds.  I lashed and lashed my tail.

Karen Jo:  Some chipmunks have discovered the bird seed that the birds knock to the ground.  I was very glad to see them.  I haven't seen any since the fire two years ago.

Spyro:  What were you doing in the back yard for so long?  You said I could stay out with you if I behaved, but it was too cold for me to stay out long.

Karen Jo:  Herman's grave marker arrived and I was putting it up along with the solar powered colored lights  I got for Herman and Emma.  Herman got a star and Emma got a dragonfly.  I really like them and they make useful markers for the sides of the graves.  I also fed and watered the birds. 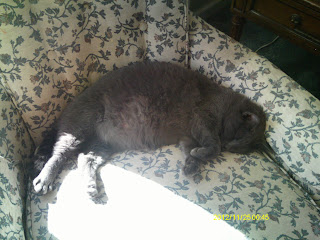 Oja:  Hmmph!  Going outside in the cold seems stupid to me, especially when there are such nice sun puddles inside.  This is the same chair where Herman and I used to nap together.  I have been really good about keeping Mom company at bedtime.  I curl up right next to her face and purr softly.  I let her pet me a little, but I don't want to be petted as much as Herman did.  I want to take my nightly bath, then curl up and sleep.

Karen Jo:  Oja does sleep with me on most nights.  Some nights she and Spyro prefer to sleep elsewhere, but one or both of them is always there in the morning, making sure I am getting up for breakfast.  I am feeling a bit better.  I went to Thanksgiving dinner with my brother and nephews to one of my nephew's girlfriend's house.  There was a whole crowd of us and it was delightful.  When my brother brought me home, we had time to go to the bank and get the last of the papers connected with my Mother's death signed and notarized.  I went and filed the last of the papers with the county today and got the utilities put in my name and changed the insurance to my name, too.  It's finally almost all done.  Once I am sure that the last shares of stock have been transferred, I can close her checking account and everything will at last be all taken care of.  That took a great weight off my shoulders and made me feel happy.  I still miss Herman lots.  It's hard to get used to being greeted at the door by only Spyro, but it will come.  I also feel better that his grave has a marker and a light. I should be blogging fairly steadily from now on.
Posted by Karen Jo at 9:49 PM

We miss Emma too. I find tha tit does help to have other cats when you lose one - they still need to be fed and played with and it makes the healing process go easier. Glad you got all the final details of your mom's taken care of.

So glad things are getting better for you. We bet Spyro and Oja are lots of company and entertainment. That ham-mick pic is adorable! Happy Thursday, furriends.

Spyro kind of sound like me. I can play a bit too rough sometime.

We have a dragonfly solar light. It is really nice when it changes colors in the dark.

It is hard to believe that it has been a year!

Has it been that long. We think that it is very good for you all to have each other right now. You are a special owner to care for these love bugs.

Goodness, you've had your share of sads, haven't you! hugs, just hugs!

You have had lots of sadness in the past few weeks between Herman and finalizing your mother's papers, so no wonder you were so weepy about the anniversary of Emma's death. It must have been overwhelming. I hope things will be looking up for you from now on.

I don't think Emma every got short changed with all the love you gave her. Emma and Herman were very special to all of us as are Spyro and Oja. Hugs from all of us.

We're glad to see you back and agree with Brian, Emma never was short-changed with you. She and Herman were blessed to have had you as their caretakers.

You always give your best love and care to your cats - never go back and say if only .... They loved you wholeheartedly as Spyro and Oja do now.
Luv Hannah and Lucy xx xx

I don't know that we ever get "over" from losing a fur baby, we just get through it which it sounds like you and the rest of your furbabies are doing. Sunny naps seem like the perfect thing to do right now.

I agree with Wendy S. We're glad better things are happening for you.

I cannot believe it's been a year since sweet Emma left us for the Bridge, where does the time go? That is indeed a very lovely fun picture of Emma. I am so glad you made her so happy and I know her soul is content.

Oh My, I have only known your bloggy for a short while and did not realize your Mom had passed, and now Herman and only a year ago, Emma. Mom and Dad lost all 3 of their before me cats within 10 months...they think none of them wanted to be left without the others. But I try to help them heal and I know Spyro and Oja will help you. Paw pats, Savannah

We bet Herman and Emma are playing and having fun at the Bridge together. We like to think that even cats that may not have been the best of furiends on earth are best friends at the Bridge. We're glad you're feeling better. You've had much sadness lately.

We're so glad things are getting better for you, Karen Jo. You've had so much to deal with.

We miss Emma and Herman, too. Surely they are romping through sun puddles together at the Bridge, and watching over all of you. And we bet Emma does not feel shortchanged at all, because your love for her is boundless and forever.

Hugs to you all.