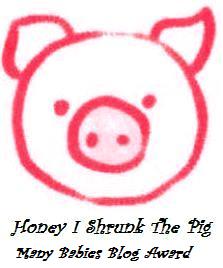 Karen Jo:  Team Tabby gave this award to Spyro, Oja and Angel Herman two weeks ago and I am finally getting around to posting it.  Thank you so much Team Tabby.  I am sure that Herman is thrilled.  I know Spyro and Oja are.  I guess Spyro and Oja might qualify as babies, as they are both two years old.  I pass the award along to: 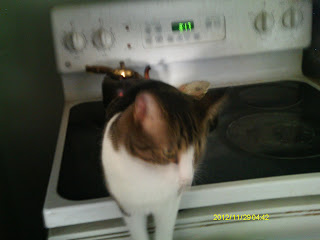 Spyro:  Mom has trouble taking good pictures of me, because I am seldom still.  I was sitting in a light spot in the hall, just as handsome as you please, but when Mom pointed the camera at me, I walked right between her legs and into the kitchen.  I thought I could talk her into letting me go outside.  I jump up on the stove and meow and meow at her to open the door, but she hardly ever listens to me.  I also keep moving my head.

Karen Jo:  I really wish I could get a shot of the way you tilt your head when you are curious about something.  That is where your head was when I pushed the button, but you moved immediately.

Spyro:  Always keep the beans guessing, that's my motto.  Mom got some interesting packages in the mail today.  I sniffed them all over and even knocked one of them on the floor.  Sadly, none of them were for us.

Karen Jo:  It's the time of year for interesting packages.  There will be some for you, eventually.

Spyro:  I got some good views of Mom crawling around on the floor yesterday and a bunch of balls appeared.

Karen Jo:  I went on one of my sporadic toy hunts.  Oja's jingle balls have been disappearing.  I found a bunch of balls and a little something from Herman.  That last week he was really fighting me about taking his Metro.  I found a pill he had spit out behind his platform after I thought he had swallowed it.

Spyro:  I haven't seen any more chipmunks, but there have been a lot of birds. 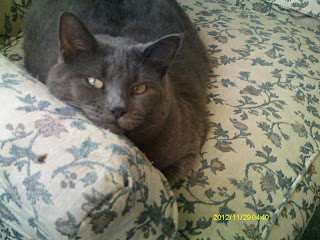 Oja:  I like to watch the birds, too.  Late yesterday afternoon, Mom found me in this chair on my back, looking out the window.  I was watching the birds in the tree next door and decided I might as well be comfortable about it.

Karen Jo:  I would have loved to take that picture, but there wasn't enough light.

Oja:  Some of you must be thinking that I live in this chair, but I don't.  I run around a bit and play with Spyro and knock balls all around.  I snuggled up tight to Mom last night.  We had a good time together.

Karen Jo:  I am getting used the changes.  When I am feeling sad that Herman isn't there to greet me at the door or snuggle up to me at night, I tell myself how lucky I am that Spyro greets me at the door every time and Oja snuggles up to me most nights.
Posted by Karen Jo at 1:22 AM

You guys make sure to give Miss Karen lots of cuddles, especially when she is missing Herman.

I LOVE that you got your human to dig around for your lost toys! Keep up the good work.

Whenever my babies pose for a picture, I run and get my phone or my camera, then they move! It never fails... How do they know? Cats are too smart :)

Congratulations on your award! We think all fur babies qualify as babies, even if they are senior babies :)

Thank you for our award. Mommy has the same problem taking pictures of US. She has a very nice picture of Scylla leaping, it turned out even better then the one of Scylla sitting.

That's a lovely picture of Oja resting her chin on the chair arm.
Luv Hannah and Lucy xx xx

Congratulations on the award.

I just wanted to send you a meauw for Egypt, where I spent some holidays (without my darling cats, lol) weather beautiful, people nice everything perfect !

ConCATulations on that great award! Spyro, we love seeing you, pal, so we hope one of these days you'll pause just long enough for Karen Jo to take some nice pictures of you. :)

And Oja, we love how you got comfortable watching those birds.

Thank you for the award! I still feel sad too about Herman being gone. I can only imagine the amount of pain that's still in your heart. It's so not easy letting them go.

Thank you SO much for the sweet award...it's pretty fun having a new baby around!!! ...not sure that Katie agrees. Yet. ; )
We'll be sure to post this and share soon!
xo, Glogirly, Katie & Waffles Too

You two are so very special and congrats on themcool award! Bravo for taking sure good care of Mom too!

Sensational Spyro!! You are a firecracker! Yay!! Gorgeous Oja!! Awww you like your chair - it's so comfy! Take care
x

Congratulations on your award and thank you for thinking of us!...We are so glad you have Spyro and Oja, Karen Jo; we know how much you miss Herman and Emma and we know these sweet boys will help heal your heart...Hugs and love, sweet friends...J, Calle, Halle, Sukki

Good awardie and spreadin it around!

Concatulations on the award! And thank you for passing it on to us! We posted it this morning!

Luf and hugs, Us

time does heal...and you have sweet Oja for snuggles, pudgy tummy and all, and loyal Spyro to greet you at the door...lean on them during this time of change...just a thought, and warm paw pats, Savannah