Herman's Gotcha Day at the Bridge 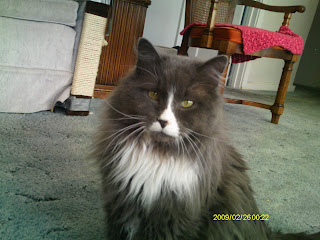 I have hundreds of pictures of Herman, so it was really hard to pick a favorite for this post.  I wanted one where he was sitting up and in full floof, so that narrowed it down considerably.  This is from way back, shortly after I adopted him.  The shock of his running off to the Rainbow Bridge has worn off and the sadness has come to full flower.  I was feeling really down this morning and actually dreading doing this post until I saw this article in last night's paper.  It seems that Herman certainly didn't waste any time in taking up his duties as guardian angel kitty.  To summarize, a tiny kitten was rescued from the town landfill (dump) on the afternoon of the very day Herman went to the Bridge.  She was taken in by Friends of the Shelter (the same group who rescued Herman) and named Milagro (Miracle). To top it off, she is a black kitty with a white bib.  She will be in foster care until she is old enough to get her shots and be spayed, then she will be put up for adoption.  I certainly believe that Herman had a paw in this.  He had been rescued and given a chance for a good life, so he passed the favor along.

Going through the pictures also gave me a chance to review all the good times Herman and I had together.  I have pictures of him playing, napping, lounging around, looking out the window -- just generally enjoying life.  The joy I got from adopting Herman changed my life.  I was in a depression after losing my Mom and feeling very lonely.  At the same time, Herman was very lonely in foster care because he had to be isolated from the other kitties and his foster Mom had a houseful of them.  He had given up hope of ever getting out of that one room and was just moping around and acting grumpy with people.  His foster Mom was afraid that he would never get adopted because of his health issues and his grumpy attitude.  Then I saw a flyer about Herman posted on the bulletin board of the grocery store where I worked and I decided almost immediately that I wanted to adopt him.  I didn't go into it blind.  Before I called about him, I went online and read everything I could find about FIV and Feline Leukemia.  I decided that I could handle it and called.  When Herman and I met, a small miracle occurred.  For days, Herman had been hiding and would only come out for food, so his foster Mom gave me a paper plate with a dab of tuna on it to lure him out.  He came out, ate the tuna and instead of going back into hiding, as he had been doing, he sat there and looked at me.  I held out my hand and he nuzzled it.  He even let me pet him a little.  His foster Mom was amazed.  After that I only had to go through and interview with the head of Friends of the Shelter to make sure that I would give Herman and good home and then he came to share my home.  The rest is well documented in this blog.  The love and comfort Herman gave me brought me out of my depression and the love and comfort I gave him brought him out of his.  We were a perfect match for each other.

Because of Herman, I was able to open my heart to other kitties with Feline Leukemia and I am so glad that I have.  It is very comforting to me to have Spyro and Oja to love and be loved in return  Thank you, Herman for all that you gave to me in the three years we spent together.  I will never forget you.
Posted by Karen Jo at 5:41 PM

Such a wonderful post and the memories will make your heart smile. Believe me, none of us will ever forget that Herman, he made our world smile too. Hugs to you, Spyro and Oja.

Yes, a beautiful tribute to a beautiful cat. Certainly a boy worthy to miss and grieve. Thank you so much for opening your heart to him, I'm thrilled that you both got a great blessing out of the deal! Purrs and hugs to you.

Amazing little creatures, aren't they? That they open up to us when we are closed down...and that opens us up to love profound! The love I feel for my cats is profound, in fact I broke up with my last manfriend because he thought that the love I have for my cats was nothing compared to human love... Even my therapist said he just didn't 'get' me...

May little Miracle find the perfect forever home, just like Herman did!

That is such a nice picture of Herman. You gave him such a wonderful life and so much love and it sure seems like he loved you in return. That is a wonderful story about the little rescued kitten. Sweet angel Herman.

What a touching tribute. I think you and Herman were meant to be, and that he had to leave early will never change that. :-)

We have leaky eyes reading this. A lot of what you are going through is what happens to Mom since Tamir left. Looking at pictures is one of the hardest things.

We're so grateful that you adopted Herman. He not only opened your heart but opened the heart of so many of us. Herman was a very special ManCat and we will miss him a lot.

I'm a little teary! What a wonderful post about Herman, and I agree 110%, he did have a paw in Milagro's rescue. I think there's nothing better than a kitty's love to help heal our hurts and I'm so glad you have Spyro and Oja for company.
Happy Bridge Birthday Herman, we love you!

Wonderful and touching story. Herman was (and is) a miracle worker.

You will always love and miss your handsome Herman. He left you a lot of love and memories, so you won't ever forget him.

What a beautiful Tribute to Herman!! We was a special kitty and we will keep him in our hearts forever! We are so glad Oja & Spyro are with you!!
Hugs from your TX furiends,

What a wonderful tribute to Herman. You gave him an awesome life, and he returned the favor to you many times over. Plus he gave you the gift of learning how to care for FIV and FeLV kitties - and the desire to open your home to them. I know you miss him lots, and his life was too, too short, but in the long run, he left you with so much when he went.

What a lovely tribute to such a handsome,sweet kitty. It is so nice when cats make a difference in our lives and I wish more people would realize this quality in cats! The love and caring they give is uplifting :) I am so glad you have Spyro and Oja.
Hugs,mom Nancy

Such a wonderful tribute to a very special cat. Purrs to you and Oja and Spyro.

Love that picture of Herman. And that's a wonderful tribute to him. I know you're hurting, but I'm glad you can look and see all the good times you had with him. What a special kitty!

he was such a handsome guy... i get a little sad reading your posts because i know herman is no longer there... this was a very nice tribute to him... i remember when you first posted about him and posted his first picture... all i could say was, what a handsome cat!

That was such a beautiful post and tribute to Herman, Karen Jo. I understand the relationship, because my "angels" Chumley and Annie saved me during such a dark time in my life. I'm not sure I ever would have gone through with committing suicide, but I thought of it every day, all day, for a long time, though knew in my heart that I'd never leave my fur family. So they gave me a reason to live, and in their own way now, the boys do too. My life would be terribly lonely without them.

I wish Herman had made it to his Gotcha Day, but yes, I can imagine he had a paw involved in the rescue of that kitten.

Sending you much universal Light and many hugs...Just give yourself the "space" your grief needs.

I always say, " May the memories of love outweigh the grief of loss." I think you are finding this to be the case. Herman has taught you so much. He is truly an angel. May his memories of love continue to sustain you even as you mourn your loss.

Karen Jo, we are sending all of our purrs to you. We love Herman and we are SO glad he had such a wonderful home with you.

Lovely tribute to a very special cat. He had a job to do and that was to care for you and you helped him in return. It did sound like his soul led others to rescue the tiny kitten on the day he passed. So glad you both found each other and enjoyed your lives together. He is in your heart now forever!

It's good to remember our absent friends. The happy memories will always be there for you.

That was such a lovely post for Herman... We think anny picture of him is bootiful.

Herman was a very special mancat and we aren't surprised in the least that he pawed it forward for the kitten that was saved.

Herman did a very special thing for you helping you with depression and he did a special thing in turning you into a champion for cats with FeLv and FiV too.

What a beautiful post, Karen Jo. It shows so well the special cat that you and Herman will always share. Big hugs, and many purrs and prayers to you.

I believe this is the best ever gotcha story I have ever read. Herman was very special in so many ways. He saved you, and you saved him. Karen Jo you did make him very happy. Ease your heart with that knowledge. He knew love and joy, he knew you.

Happy gotcha day, angel Herman. You brought a lot of happiness to us, and unconditional love to your mom. You were both lucky to find each other. And we were lucky to read your story.
You are in my thoughts Karenjo