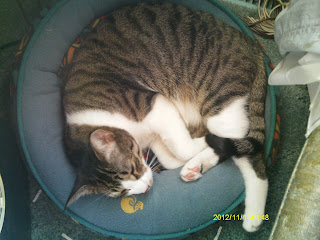 Spyro:  I love napping in Herman's bed.  It's comfy and warm and it smells like Herman. 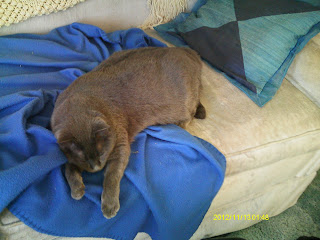 Oja:  I have taken to napping on this blankie on the couch.  Mom often lies down on this couch to read and I like to get up on her legs when she does.

Karen Jo:  I was lonely last night.  No kitty came to sleep with me.

Spyro:  We were mad at you.  You left us in the night and didn't come home until 0-dark-thirty.

Oja:  We were starving.  Dinner was very late.

Karen Jo:  My friend took me out for a while, just to get me out of the house and to take my mind off Herman for a few hours.  It worked and I felt a little better.

Spyro:  You were up so late that I decided I better get you up for breakfast.  It was easy.  All I had to do was jump up on the bed and you were awake.  I don't know why Herman made such a fuss about how hard it was to get you up.

Karen Jo:  The only time Herman had a hard time getting me up for breakfast was when he decided to get me up before dawn.

Spyro:  I came in later to get your lazy buns out of bed and I'm almost sorry I did.  All day yesterday and all day today you have been busy, busy, busy.  I've never seen you do so much work around the house.

Karen Jo:  I have to keep busy, or the negative side of my mind tries to lay a guilt trip on me about Herman.  I know perfectly well that there is absolutely nothing to feel guilty about, but I hate the thoughts that crop up, so I just keep busy.  The same thing happened when my Mom died.

Spyro:  Late this afternoon, I finally got tired of it and tried to get you to stop playing with your papers and play with me.  I sat on your papers, so you had to slide them out from under me.  When you were writing in your little book, I put the bitey on your pen.  When that didn't stop you, I put the bitey on your little finger.  Finally, when you got up to get something, I pushed all the papers and your pen and your little book off the table.

Karen Jo:  I had let the mail pile up and I had some bills to pay and I put the order in for Herman's grave marker.  I pet you a little between opening envelopes.

Spyro:  It wasn't enough.  I wanted your undivided attention.

Karen Jo:  After I put the peas on the stove to cook for supper, I gave you all the attention you wanted, as long as it lasted, which wasn't long.

Spyro:  Oja came into the kitchen and I decided to hop down and greet her.

Karen Jo:  And chase her into the living room and play with her.

Karen Jo:  To change the subject, the Bird Channel is on Cat TV again.  It snowed just a tiny bit Saturday night, so it's safe to put out the bird seed, suet and water again.  The bears have gone into hibernation.  I put everything out yesterday, but the birds didn't find it until this afternoon.  Spyro and Oja haven't discovered the birds yet, but it won't be long.  They get a little noisy in the mornings.
Posted by Karen Jo at 8:42 PM

Everything is different when a furbaby leaves for the Bridge. Every day is a new "normal". We're sending soft, comforting purrs to you.

I hope someone snuggles with you tonight.
Do not give in to the thoughts that there was something you should have done. You couldn't have changed anything. hugs!

You guys stay in my thoughts - I'm really so sad and sorry for you guys... but there really wasn't anything you could do. I blamed myself (and still do) for not seeing that Inigo was sick... but it's not your fault any more than it was my fault. It was just his time.

Please stay strong my friend. I hope you can feel all the positive thoughts the blogosphere is sending to you.

Purrs to you - it will take a while before your negative side stops trying to give you pointless guilt trips. Spyro, clearly you understand that and are trying to distract your human, but humans emotions tend to linger... don't worry, she will feel better eventually. It takes time. In spite of their behavior, humans are rather fragile and perishable beings.

Tell your mom to be kind to herself, kids. Give her kisses, not nips!

We are sending purrs and gentle head butts in the hope they will help you feel a little better. Just remember Herman had a lovely life with you with lots of love.
Luv Hannah and Lucy xx xx

Have been thinking of you and hoping things will ease up a bit for you. It takes time to get used to life without a sweet furbaby. Sending lots of purrs to you!

We cats are very sensitive to how our humans are feeling and of course, do our best to soothe you in our individual ways.

Staying busy is a good thing. Intrusive thoughts are, well, intrusive. Good to nip them in the bud (pun intended).

I agree, staying busy is a good thing and we all send you purrs.

Staying busy is a good thing, but please be sure to allow yourself to enjoy the love that Spyro and Oja want to give you. You and Herman were so lucky to have each other, and he had a beautiful life there. Hugs, purrs and prayers to you all.

Help keep yer Mom busy fer a while, its good fer her. Purrs to all of you...

So glad you have Oja and Spyro, paw hugs, Savvy