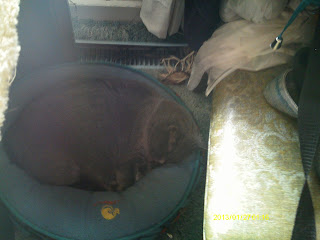 Oja:  Spyro is over at The Tabby Cat Club today.  If you just have to see him, you can go over there.  Meanwhile, I am snoozing in my warm bed by the heat register.  We are having clouds and freezing rain for the third day in a row.  I want my sun puddles back!  The boys are being onery, too.  Austin was lying just where I wanted to walk, so I hissed at him to get out of my way and he ignored me.  I smacked him with my paw and he had the nerve to smack me back.  After a few more smacks, I gave up and walked around him. Boys!  Cant't they tell that I am the oldest and should be in charge around here? 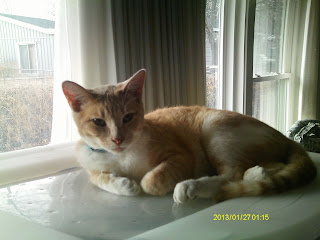 Austin:  While Spyro is gone, I have taken over his spy tower.  It's great up here and that hissy Oja can't get anywhere near me.  I learned something new today.  I have seen how Spyro does something, then runs over to a certain drawer and the Mom gets him something out of the drawer and he gets pretty excited about it.  Rocio started doing the same thing a couple of days ago.  I have even seen Oja do it.  Today I found out what it is.  I scratched a scratching post and the Mom went over to the drawer.  I ran over to find out what it is that she takes out of it, but so did Rocio.  Mom tried to give me something in her hand, but I was up on the back of the couch and fumbled it over the back twice trying to get it before Rocio did.  I finally got one and it was yummy. 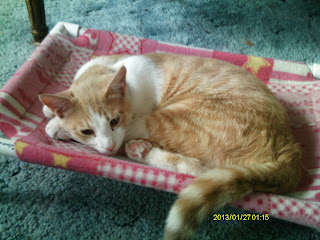 Rocio:  It took you long enough to figure it out, Bro.  Whenever we scratch on scratching posts or scratchers, the Mom gives us a treat.  They are yummy, but you have to watch out when Spyro is around, or he will steal it.  Oja hissed at me today, too.  The Mom sat on the couch and I went to get next to her and Oja hissed at me.  It's like that silly girl is trying to claim the Mom as hers or something.  I just got on the other side of the Mom and we each got to be next to her.

Karen Jo:  I really know very little about the social dynamics in a group of cats, but it looks to me like Oja is making a bid to become Alpha cat.  She is trying to boss the Boys around, but they are having none of it.  Austin pounces Rocio and Spyro for chase and rasslin', but he ignores Oja.  Oja pounces Spyro for rasslin', but ignores the Boys unless she feels that they are in her way.  If Oja gets too hissy with one of the Boys, the other one will come to the rescue and Oja will run from the pair of them.  I don't know how it will turn out, but it is fascinating to watch.
Posted by Karen Jo at 3:09 PM

Kitties are so interesting to watch! Truffle let Brulee know in a hurry that she was in charge.

Oh, they are just working on sorting it all out!!!

It's amazing how it all seems to work out!!!

Do you know, after 10 years, I still have arguments with Binga about who is in charge here?

I suspect that Waffles Too and I may never see eye to eye. ...especially because I think he's going to be twice my size!
: ) Katie

Cat politics is very interesting to watch. Quite frankly, I can't quite tell who is alpha cat in my bunch though Tutu certainly is Bossy cat!

Adorable photos=sweet dreams, precious boys!...We loved your last post with everyone playing too=that was very cool!...We understand about getting along within a group=sometimes we fight, but mostly, we play together and always sleep close together too...Happy week ahead, sweet friends...xoxo...Calle, Halle, Sukki

It IS fascinating, isn't it? We sure hope everyone there figures things out soon. :)

Snoozing in the warm bed and being up on the spy tower seem like great things to do while Spyro is away!

Oja we think you have the warmest place right by the heater. We are snuggling in bed or by the radiators here too as it is very cold.
Luv Hannah and Lucy xx xx

Yes we know which cat is boss here - Molly, er Mooch, er Trooder, er Stashy, Toot? Ok so we dun know acuz we all have our own areas we are safe in.

Oh how I love this. I have 3boys and 3girls. So I know about conflict. Everyday its something. Glad to hear they a scratching for their treats. Cats are so smart.
Good to see you guys!

We is just stopping by to wish you all a great weekend!