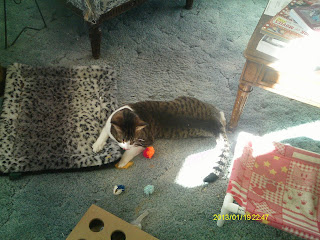 Spyro: About every other Sunday, Mom gets out the 'nip and today was 'nip day.  Now I don't know which toy to play with next. 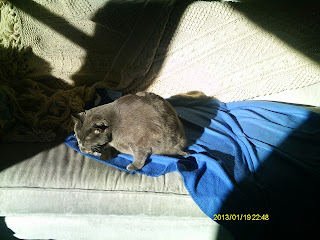 Oja:  Silly boys!  I stayed up here on the couch and watched them all get silly.  It's not that I don't like 'nip, but no way was I getting down there among those crazy boys to get some.

Karen Jo:  I'll remember that for next time and bring you some of your own on the couch or your chair.

Spyro:  Today has been a really fun day.  Mom has been staying up after feeding us breakfast and playing with us.

Karen Jo:  When I was working I was a night owl  because my hours were 2-10:30 PM.  Kitty playtime was   in the morning between the time I got dressed and the time I ate, then again after I got home.  Since I retired, I was keeping the same hours, only kitty playtime moved to dusk, as they were more active then.  The first morning after the boys moved in, I went back to bed after breakfast and I heard noise:  THoE, toys getting knocked around and hissing.  That last one got me up and I have been staying up after breakfast ever since.  I never knew how active kitties were early in the morning.

Spyro:  The boys and I had lots of fun.  We are all friends now, mostly.  We played chase and pounce and rasslin' and the boys had some games I had never seen before.

Karen Jo:  The boys showed Spyro how to play box wars and cube wars and under-the-sofa wars.  Spyro has been very polite about playing with the boys.  He never joins in unless he has been invited.  He will run from Cool Dude to start THoE, but he won't pounce first. Spyro has decided that jumping in the box is an invitation to play box wars, though.  I also wondered just how long he would last watching under-the-sofa wars before he couldn't resist joining in.  It turned out to be about 15 minutes.  Cool Dude saw some movement under the sofa (which has cloth flaps hanging down almost to the floor, so you can't see much) and charged under to get Hissy Boy (he thought).  He came charging right out again when he found Spyro under there instead.

Spyro:  After all that, Mom decided that it was time for different toys and she got out the kitty with the catnip shorts and put new catnip in it and she got one of the fuzzy balls out of the catnip jar.  Party time!

Karen Jo:  First I gave Hissy Boy the catnip covered fuzzy ball and he picked it up in his claw and shook catnip all over the place. Spyro pounced right on the loose catnip.  Cool Dude was looking a bit left out, so I gave him the kitty with the newly-filled catnip shorts.  Things got a bit wild and crazy.  Oja started making a sound like the beginning of a growl whenever they got really rambunctious.  I got out Da Bird to see what they would make of that.

Karen Jo:  Cool Dude was leaping way up in the air and catching Da Bird every time.  Hissy Boy was looking left out, so I grabbed the Kragonfly with the other hand.

Spyro:  I got tired just watching them, so I got in Herman's ham-mick.  Mom flipped the Kragonfly my way a few times, so I could play, too.

Karen Jo:  I waved the wand toys around until my arms got really tired, then I put them away, much to the disappointment of the boys.  They dragged Da Bird out again, but soon lost interest in it when it didn't fly.  Oja had gotten a bit agitated, so I sat down next to her on the couch and started petting her.

Oja:  It was high time I got some attention.  Mom gave me all her attention until that dang dryer buzzer went off.

Karen Jo:  I had started the laundry before I got involved in kitty playtime.  I went back to Oja after I took care of the laundry.  I had been getting a little concerned about Oja, as she didn't seem to be settling down very much.  In fact, Hissy Boy got too close and she ramped up to a full open-mouth hiss and a "One step nearer and I'll rip your face off" snarl.  Hissy Boy was too startled to hiss back.  I do think things are getting better, though.  Just before afternoon nap time, Oja jumped off the couch and made a tour of the house.  She checked out her favorite hidey-hole, but didn't go in.

Oja:  Those stinky boycats ruined it.  They had been in there and stank it all up.

Karen Jo:  Oja hissed softly at any boycat who looked at her, but mostly she just walked around, checking things out.  This made me feel better, because she had been staying up in her chair and on the couch in the living room, except to eat and use the litter box.  I think she is beginning to believe that the new boys won't hurt her.  It may be Tuesday before I can show you pictures of the Boycats and use their real names.  I forgot that Monday is a holiday.
Posted by Karen Jo at 5:17 PM

Wow....you sure have fun at your house!! We're looking forward to the pictures of the Boycats!

Well that sounds like one heck of a fun day to me! Come on Oja, they really will let you join in!

It sounds like there is all sorts of fun going on at your house! Oja, I hope you decide to join in the fun eventually. Until then, milk it for all it is worth to get extra catnip and attention!

Your mom can come and play with us anytime. Our mom is always too tired.

Never a dull moment!!
Things take time, Oja...we understand. But we think you could have lots and lots of fun if you join in!
; ) Katie & Glogirly

All those boycats, Oja...I can understand why you're reluctant to play with them.

Oja, no need to be nervous because no one will dare hit a lady cat!

We can't wait to see pics! Sounds like lots of fun at your house.

Sounds like you all had lots of fun with the toys and nip! We can't wait to see pictures of the boycats :)

You boys area having lots of fun together!

Sounds like some serious playing going on at your home!

Oh, it sounds like so much fun at your house! Oja, we bet those boycats would love to have you join in the fun! :)

Sounds like a great time. We hope you soon join in Oja.

That sounds like a lot of playtime fun to us!

You are really having a great good time!! Make your mommy very busy.