Almost Back to Normal 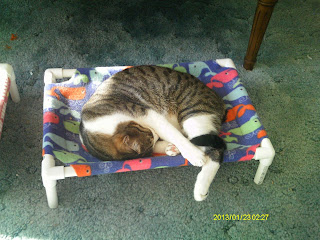 Spyro:  Mom waited until nap time to take our pictures.  That's the only time we are still. 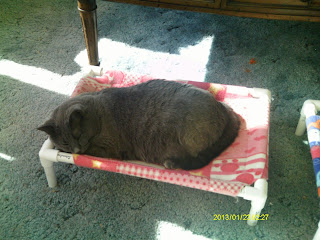 Oja:  It's nice to feel safe enough to nap wherever I want again.  I still hiss at them a little and try to smack them with my paw if they get too close.

Karen Jo:  Oja is back to moving around the house to all her usual places again.  She was in bed with me when I woke up this morning for the first time since the Boys moved in.  I think she might want to get to know the Boys, but she has a strange way of doing it.  She will sneak up on one of them from behind and sniff the very tip end of his tail very carefully, then hiss.  The situation is looking a lot better though.  Oja has become a lap cat and will sit in my lap while I  sit on the couch and read.  I found out last night that Hissy Boy is also a lap cat.  I was checking out all three computers to make sure they were working and playing games that I hadn't played in a long time when Hissy Boy jumped up in my lap and made himself right at home.  I'm taking a lazy day today and was reading on the couch with Oja in my lap.  Hissy Boy jumped up on the couch and slowly approached until he and Oja were only two inches apart from being nose to nose.  Oja didn't hiss until he turned and moved like he was going to get in my lap, too.  Hissy Boy jumped down, walked around to my other side, jumped up on the couch and cuddled up next to my  thigh.  Oja didn't mind that.  When I look my nap pictures today, all four cats were in the living room, sleeping peacefully.

Oja:  Spyro and I had a grooming session in my bed this morning for the first time since the Boycats moved in.  I feel like playing again.  Mom got out Da Bird and Kragonfly and Spyro and the Boys were really playing.  I came running up and grabbed Da Bird right out of the air.  That surprised those Boys!

Karen Jo:  It surprised and delighted me, too.  Oja played with Da Bird for quite some time, while the Boys played with Kragonfly and Spyro watched.  Then Cool Dude came flying through the air and grabbed Da Bird.  Oja hissed at him and walked over to her ham-mick and got in.  She wasn't through playing, though.  I flipped Kragonfly over to her while the Boys played with Da Bird and she really got into it.  She lay on her back and grabbed at Kragonfly with her paws, caught it and chewed on it, then let it go for more.

Oja:  I also played with my jingle-ball and the TurboTrack.  The only thing that's really wrong now is that every other cat wants to eat my food.  I don't have to compete with the Boys for my Stinky Goodness any more, thank goodness, but Spyro will wolf his down and try to help me eat mine.  Mom usually chases him off.  Then Spyro and both Boys want to help me eat my dry food.  Spyro won't eat his dry food, only mine.

Karen Jo:  That's why I have started taking some kibble from his bowl and putting it in yours.  I have no way of stopping any of them from eating your dry food, because anywhere you can go, they can go.  Maybe you should go sample their kibble.

We are glad everything is getting back to normal.

Oh Honey....everybuddy hang in there. Share mommy too. And Oja you eat Spyro's fuds.

Wow - lots to catch up on here. Don't worry about blogging all the time - life kinda takes up the time sometimes. Can't wait to see the boys or at least hear about them.


Thanks for your concern about our Snowball.

It sounds like things are working out between all four of you!

We are happy that things are getting back to normal there. Take your time, and post when you can. We'll always come visit whenever you do. :)

It is nice that things are getting back to normal.

Sounds like very good progress between you and the boys, Oja!

You both have GREAT hammicks! We keep asking TBT fer one, but one never shows up. He says its "on the list".

We are glad to hear you are adjusting better, Oja!

We're glad things are getting better and hope you guys start enjoying each other's company soon=it's always fun to have playmates!...You look very comfy on your cool hammocks...xoxo...Calle, Halle, Sukki

ummm, ok...Oja, I hope you know that mostly, I just want you to be one happy lady cat...and so far, it looks like you are headed in that direction..right???...sending soft soothing purrrs, Savannah