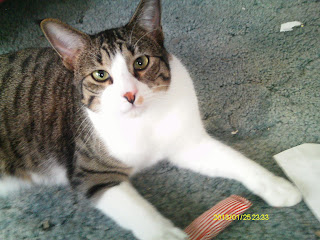 Spyro:  Mom took pictures today just after she got out the toys for the day and we had a play session.  Every cat is feeling happy. 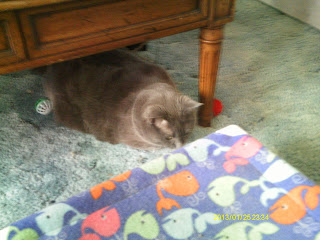 Oja:  I'm not feeling so happy.  Mom and I were quietly playing with the wand mousie when Spyro and the Boys noticed and came and took it away from me.

Karen Jo:  I got another wand toy, then the other wand mousie, so we could keep playing.

Oja:  I didn't want the other wand toy and the mean Boys eventually took the other mousie away from me, too.  I hissed at them, but it didn't do any good.

Karen Jo:  You had mostly stopped playing with the other wand mousie by the time Rocio decided that he wanted it.

Oja:  It's still not fair.  Austin and Rocio want whatever toy I am playing with and Rocio eats my food.

Karen Jo:  There's a lot of that going on.  Spyro was eating the Boys food this morning, too.  I think I better give you some good Mom Time this afternoon. 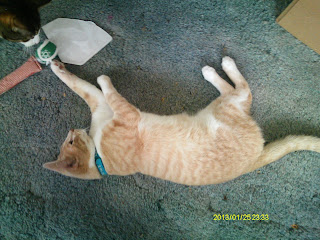 Austin:  Whaddya mean this is your toy, Spyro?  I pounced on it as soon as Mom tossed it out of the box.

Sypyro:  I had it for a long time before you moved in. 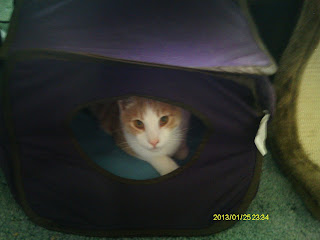 Rocio:  Spyro and Austin got in a rasslin' match over the toy and just because they like to rassle.  I'm staying in the cube until they calm down.  Or maybe I'll pounce both of them if they roll over this way.

Karen Jo:  Things are moving right along.  Oja is sleeping with me again most nights.  She doesn't let the Boys spook her off the bed any more.  I have had up  to three at a time on the bed with no fuss.  Oja only seems to hiss now when it seems to her like one of the Boys wants something she has or that she considers hers -- if they come too close to her food bowl, if they approach while she is having Mom Time in my lap, if she is playing with a toy and they want to "help" her play with it.  It's kind of a standoff, like when she first came out of the safe room.  She isn't afraid of the Boys, she just doesn't like them yet.  The Boys aren't a bit afraid of her, either.  I hope Oja does finally decide to accept the Boys.  I've got half a mind to adopt them if she does.  I would hate to see them adopted separately.  The Boys can be adopted from Felines and Friends New Mexico.  They are FeLV+, but in excellent health otherwise.
Posted by Karen Jo at 11:45 AM

Oja, you keep standing up for your Mom and toy rights gurlfurriend! I know Miss KarenJo appreciates having a gurl around for company...those boys don't know how to have gurl meows with Mom...let Spyro sort out the boys...you focus on making Mom happy..purrrrs, Savannah

Those boys sound a little pushy, Oja! Just like Binga. You just have to keep being assertive!

You all look like you are having a grand time and I am very proud of all of you!

I hope it's just a matter of time and they all start being best friends!

Hello Austin! You are a pretty kitty!

We're so happy that you're all doing so well.

Oh I hope hope hope everyone can get along all of the time and enjoy one another's company and play times. xox

Oja, it's tough being the only girlcat among all those boycats, isn't it?? You show them who's boss!

It sure sounds like things are coming along quite well with the whole gang! Hugs to you all! :)

We really that things are moving the right direction! Brothers are fun, Oja! If Felix bugs me, I just shout and Mommy will reprimand him for being rough. Hee hee.

What fun! Mariah usually hogs all of the toys until Q2 takes over. Ginger doesn't stand much of a chance.

It seems to be very lively at your place these days =^.^=
Purrs