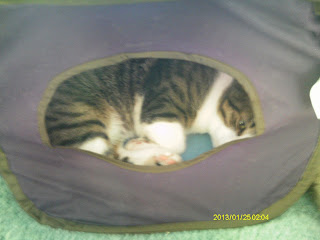 Spyro:  Can you tell where I am?  I'm in the cube.  Mom has never seen a kitty napping in here before.  Having the Boys move in has changed all sorts of things.  Herman, Oja and I always just ignored the cube.  The Boys showed me how to play cube wars with it and I became interested in it.  The Boys have discovered the ham-micks and one is sleeping in Oja's ham-mick right now.

Karen Jo:  Hissy Boy just doesn't fit as a nickname any more, so I am going to call him Loverboy because he loves to sit on or next to me.  He is the one in the ham-mick at present. 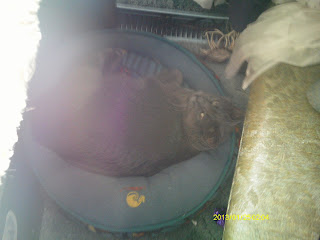 Oja:  At least my bed has been safe from stinky boycats so far.  I still hiss at them a little, but not much.

Karen Jo:  I think maybe Oja hisses and growls just a little less each day.  During the night, there was one point where Spyro, Oja and Loverboy were all in bed with me at the same time, though spread out from each other.  I tried some toys on elastics today instead of the wand toys and they weren't any where nearly as popular.  The toys as a whole are very popular.  At least one bucket of toys gets dumped over every day.  Loverboy loves the rattly mice to death.  Really, he rips their faces off then goes for the rest of the skin, but first he rips their tails off.  I am not complaining.  I can easily afford to get them new rattly mice.  Cool Dude loves the door hanger on an elastic on the kitchen door, especially at dawn.  I am finding a few teeny-tiny disadvantages to three boycats who get along: THoE at 0 dark-thirty every night, lots of stuff gets knocked over during the wild chases and they don't settle down in bed.  They are likely to climb all over me at any hour.  Oh, well, I am enjoying having a houseful very much.

Karen Jo: Spyro's food is no longer safe.  Loverboy found it and was helping himself to it this morning.  It's just turnabout is fair play.  Spyro was eating the Boys' food a little earlier this morning.  Oja hisses at any cat who comes near her food bowl, if she sees him, but they still nosh on her kibble.  I ordered some Lysine treats for Spyro and Oja, as the cats from Fuzzy Tales suggested.  I was going to thank them for the information in their comments, but I got a private blog notification when I hit the link on my list.  I'll double check to make sure I have the right URL for them. 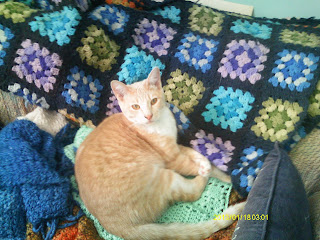 UPDATE:  I now have permission to blog about the Boys.  I will let them introduce themselves.

Austin:  I am Austin, aka Cool Dude.  I was the first one to fit in around here, but I'm still not too sure about Oja.  Spyro and I love playing THoE up and down the hall in the middle of the night. 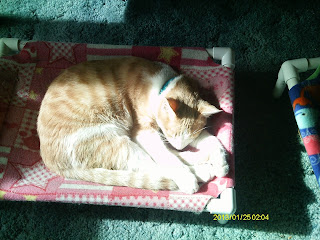 Rocio:  My name is Rocio, pronounced Rocky-oh.  I am really glad I won't be called Hissy Boy any more.  I haven't hissed in days.  These ham-micks are great.  I actually touched Oja the day before yesterday and she had to think about it for a second before she hissed at me.  We will be friends yet.

We are available for adoption through Felines and Friends New Mexico in Santa Fe, New Mexico.  We would love to be adopted together, as we are closely bonded.  We both have Feline Leukemia, but we are very healthy otherwise.
Posted by Karen Jo at 4:50 PM

It sure sounds like everyone is doing quite nicely! That makes us all smile!

Hi boys! You sure are a handsome pair.

We're glad to hear everything is settling.

It is so nice to meet you boys finally! It sounds like you are having a great time at your temporary home! I hope to see lots more of you before you find a permanent home and human!

Hi Austin and Rocio, it's great to meet you. We hope you find a wonderful forever home soon.

It's so nice to meet you, Austin and Rocio! It sounds like you both are doing well in your foster home.

Aw, the new guys are cuties! Glad things are settling down and they're starting to get along!

Hi there, Austin and Rocio! We are so happy you guys have adjusted so well in your foster home. :)

Hi Austin and Rocio...nice to make your acquaintanceship...you guys need to be sure a give my gurlfurriend Oja a wide berth...she was there first, remember?? just sayin'...Savannah

Hi Austin and Rocio! we are glad you are having so much fun with Spyro, Oja and Mom Karen Jo! We have our paws crossed for a forever home for you real soon. :)