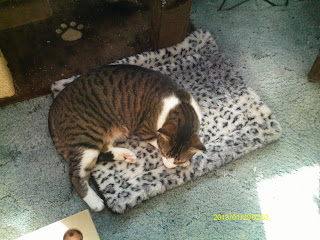 Spyro: Yes, we are still here.  Mom has a good excuse this time.  At first she was just busy with paperwork and paying bills and stuff, then she fell down and hurt her ribs.  She was in bed all day every day until just a couple of days ago.  At first it was all she could do to get up and feed us and water us and clean our litter boxes, then she had to catch up on the mail, which she hasn't finished yet, and do a bit of cleaning.  A friend of hers came over for about a week to take care of us right after she fell, because she couldn't even do that.  She is mostly better now, except she can't pick up anything weighing more than a few pounds and she can't stay up all day yet.  These are photos that she took before she fell, but we are still doing the same stuff.  I found this heat-reflecting pad that Mom got for Herman and I really like it.  It gets nice and warm when I lie on it.  Notice the nice sun puddle?  We haven't seen any of these lately.  We have been getting snow and more snow and we are due for even more tomorrow.  I ran outside yesterday when Mom opened the door to get the mail and ran right back inside.  Brrr!  I was a good boy while Mom's friend was taking care of us and didn't run outside even once.  You know what?  When your Mom has sore ribs, you can get her up for breakfast really fast by walking over her body.  Don't do it when she is really sore, though, or you will get yelled at. 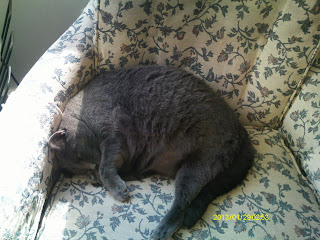 Oja:  Here I am in my favorite chair.  I haven't been spending much time here lately.  Mostly I have been lying beside Mom or on her lap while she lies in bed.  I love it.  I purr on her lots.  I even let her pet me more than usual.  Sometimes when I wiggle away from the petting, I hear her sighing.

Karen Jo:  I love having you lie beside me or on me and purr, Oja.  I am just sighing because I miss Herman.  He never got too much petting.  None of the four of you really like to be petted much.  All of you seem to like it for a little while, then wiggle or walk away from it.  Would you believe it?  One time I even had all four cats on the bed at once.  It didn't last long, but it was great to see. 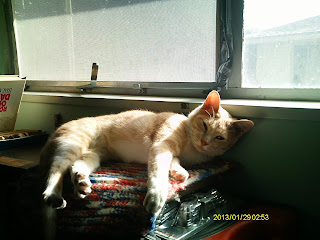 Austin:  This is my favorite spot in the house.  I am the shyest one, but I have been in to see Mom and lie on her and purr while she has been in bed;  I usually do it when the other cats are doing something else.  Oja still doesn't like me a whole lot, but she is getting better.  One evening Oja was lying beside Mom and I jumped up in Mom's lap and snuggled down.  I slid my head over and laid it on Oja and she didn't react to it at all.  We stayed like that for quite a while until Oja realized whose head it was lying on her side, then she growled at me and I moved. 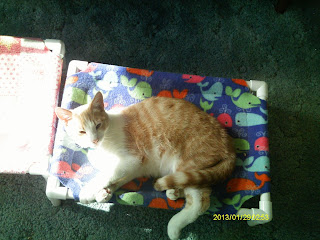 Rocio:  I can't decide whether I like the ham-micks or the cat beds best, so I keep moving around.  I even sleep in the cat bed in our room that Mom says no cat has slept in before.  She got it for Emma, but no cat liked it before.  I don't know why; it's a nice bed with room for both me and Austin.  I have been spending some time lying on the Mom and purring, too.  She likes it and pets my head and back.  I have a new game. I chase Oja down the hall until she jumps up on the Mom's bed and growls at me.  It's fun to watch Oja run. She moves her back legs together like a bunny hop.

Karen Jo:  I think having the boys around has gotten Oja to exercise more.  I think she has lost some weight or gotten stronger or both.  She is getting up into places that she never went before, like the window sills in my bedroom.  It's a much bigger jump than getting up where Austin is in his picture.  She has also been eyeing the kitchen counter and that is quite a jump for her.  I will be adopting the boys.  I got some of their paperwork today and will start the process tomorrow.  Oja still growls at them occasionally, but she let Rocio groom her for a minute and let Austin lay his head on her for a while.  Spyro loves being big brother to them and they all three have so much fun playing together that I couldn't stand the thought of breaking them up.

Oh Goodness! Our Best Purrs of Healing to yer Mom... Take good care of her til she is all better!

We hope you get to feeling better! Ribs are important. Purrs.

Purrs for your Mom...our Daddy broke two ribs back in October and it was No Fun.

And HURRAH for becoming a family!!!! We suspected that this was going to happen and we're so happy it has.

Healing purrs and soft (((Hugs))) to your Mom. We hope she feels better soon. We're so happy to hear that the boys are going to stay!!!

GREAT news that Austin and Rocio get to stay! I bet your human's ribs hurt badly for a few days. I don't know why, but it is extra painful for them to be hurt there. It has happened to my human and she knows!

YEAY! That is such happy news about Rocio and Austin staying on! Hey boys, try not to bug Oja too much, k? ;)

We hope your Mom's ribs are getting better all the time. What a terrible thing to have happen. Great news on you boys getting your adoption papers. Concatulations!

We sure hope your mom feels better soon. That musta hurt!

And how cool that Austin and Rocio get to stay! YAY!!!

We are SO excited that Austin and Rocio get to stay! Yay!

It sounds like you kitties are all doing well. We are sending purrs and prayers that Mom Karen Jo's ribs feel better soon, and hugs because she is missing Herman (we miss him, too).

We are all sending our best purrs to your Mom. Hey, we are thrilled you get to stay too, what fun!

Oh poor mum I send her some loud purrs.. Glad you got to stay and that its going well.. HUgs GJ xx

Karen Jo I am so sorry to hear about your fall. Seems like you have some great kitties to take care of you with their love, but really glad to hear you are getting better. Goodness I can remember you wondering if you should get a cat and now you have four and memories of two other sweet cats. I'm glad to see that you have Herman as main cat on your header. I definitely do not want to take Casper off of mine and at one time wondering if I should.

I learned quite a bit on your post of FIV & FeLV cats. Purrs, Huggs and Prayers to you on your complete recovery. May God be with you.

WE are so sorry, Karen Jo. Hurt ribs are horrible. It hurts to breath and move. We hope you get better soon.

We hope your mom's ribs heal quickly. Our mommy went down the basement stairs after stepping on Charles in the dark (unless he's tummy side up, he's black and very hard to see in the dark) and she had a hard time sitting for very long after that.
Concats on the new home to Austin and Rocio! You couldn't have found a better place to live your lives and Oja will get over the hissies or just ignore you...that's what the Princess does.
Sending snuggles,
Taz (the Princess), Runt, Charles and mommy, Anna