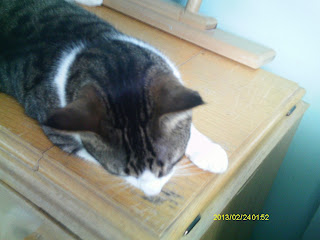 Spyro:  I always like to be where  Mom is, so I follow her around the house, unless I am napping.  I hate to hold still for the camera, though.  I am up on this thing that looks like a table, but isn't, in the boys' room, watching Austin eat.  I ran outside today, thinking that I would get to stay for a while because of Mom's ouchie ribs, but she came right after me and grabbed me and carried me back inside.

Karen Jo:  My ribs are hardly ouchie any more, unless I try to lift something heavy.  Luckily, Spyro isn't quite heavy enough to set off the pain.  I still can't stay up all day without getting really achy.  Every once in a while I have to get back on the bed and spend some time there to soothe the ache.  I still haven't heard from my doctor what the damage was, so it wasn't severe.  She thinks I may have cracked a rib or two and I think she's probably right.  I should be back to normal in another week or two. 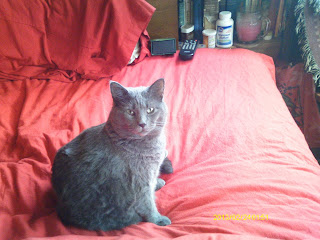 Oja: Except for eating and using the litter box, I have spent the whole day on Mom's bed.  She got new flannel sheets and they are wonderful.  Every time Mom gets up, I grab the warm spot.  When Mom lies down, I get next to her for her warmth.  Happiness is a warm kitty. 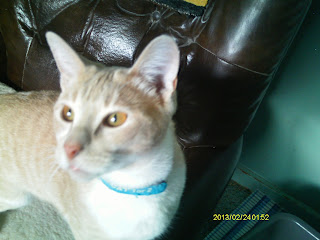 Austin:  I am in the easy chair in our room.  Of all the kitties, I spend the most time in here.  I like to get up on the bookshelf by the window and look out and I like to nap on the couch.  Sometimes, I like to go see the Mom in her bed and last night I had to put Oja in her place.  I jumped up on the bed and hung out for a while on the Mom, getting just the right amount of petting.  Then I wanted to walk across the Mom and up to the head of the bed to jump into the rocking chair.  Oja was lying next to the Mom and I had to walk past her to get where I was going.  Oja growled at me, so I backed up a little and stared at her.  Oja kept growling.  I don't know why.  I just wanted to walk past her.  I got fed up and lunged at her.  She squeaked and jumped over the Mom.  I walked where I wanted and jumped into the rocking chair.

Karen Jo:  I think Oja is losing in her bid to be Alpha cat.  Whenever Austin or Rocio invite her to rassle, she declines by running away.  I think it is Rocio who chases her down the hall, but it could be Austin as well.  It usually happens when I am in bed and I can't see who is doing the chasing.  I think Austin is going to be the Alpha.  He is the one who starts most of the rasslin' matches, except the ones between Oja and Spyro.  He is the one who won't put up with Oja's attempts to be bossy the most.  Spyro doesn't care who is Alpha, as long as it isn't him.  Rocio doesn't seem to care, either.  Spyro and Rocio nap together, as do Austin and Rocio.  Oja will now tolerate one of the boys napping near her and even touching most of the time. 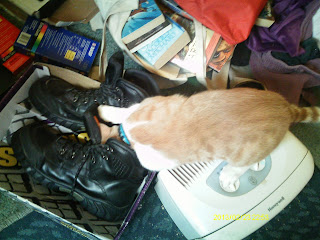 Rocio:  All I want to be boss of is the toys.  This morning I was chasing a fuzzy mousie all over Mom's bedroom.  I like to drop the mousie in one of her boots, then fish it out again.  I say, let Austin be the boss cat.  He isn't mean about it.  He will rassle with me until I run away, then he will pounce Spyro.  One time we finished our match and the only kitty watching nearby was Oja,  Austin looked like he was going to pounce Oja, but as soon as he started his wiggle-butt she squeaked and ran away.  Oja growls and sounds tough, but she hasn't got what it takes to back it up.  Maybe she is scared of us and is putting up a brave front.

Karen Jo:  I thought of that when Oja was getting used to Herman and Spyro.  It soon became obvious to me that Oja wasn't afraid of them, because she didn't run from them or cower before them, she just doesn't like mancats all that much.  The growling and hissing incidents are getting fewer and fewer and may stop in a month or two.

Karen Jo:  We were supposed to get a big snowstorm with up to a foot falling today and so far I haven't seen one flake.  It has been very cloudy all day, but no snow.  Darn it, there were things I would have gone out and done if it hadn't been for that forecast and the threatening, but apparently empty, clouds.
Posted by Karen Jo at 5:50 PM

You all are just wonderful kitties and I sure hope the big snows leave you alone! Purrs to that special Mom!

Yippee for the new kids! It's always fun when there are more.

We're sorry to hear about your mom's ribs. My mom says ibuprofen helps a lot for stuff like that (much much better than anything else).

We got about 6 flakes down here today.

It sounds like you are all sorting things out. We hope that snow stays away.

It really does sound like you kitties are getting things sorted out. Cool!

You guys keep piling on Mom to keep her warm! We think it is helping a lot...

Keep your Mom warm and safe. We hope she feels better soon.

Oh my! You had us at flannel sheets.

We're all pretty fed up with our "weather-guesser" too. MOL! Happy Mancat Monday, kittehz! xoxoxo

It sounds like they are working it all out!

We hope your mom's ribs soon feel better. It sounds like you all are working out your pecking order.