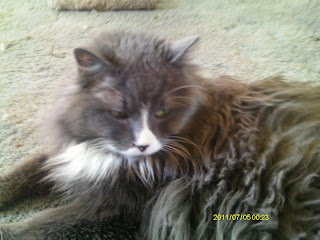 It's hot here, so I spend a lot of time just lounging around, pointing my tummy at any breeze I feel. My head is a little fuzzy, because I moved it while Mom was taking the picture.  Mom apologizes for not posting yesterday.  We kitties didn't get sick from the stress, but Mom did.

Karen Jo:  You might say I am a very visceral person.  If I get stressed out, I also get intestinal distress.  I was also eating a different diet from what I am used to while evacuated.

Mom didn't find the extension cord that she was looking for, but she found another one that works.  Now we get a fan blowing while Mom is at work.  Yay! 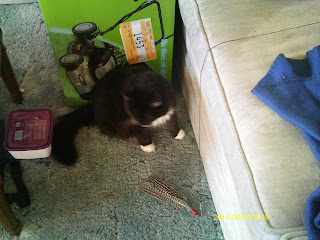 Emma:  Mom couldn't take a picture of me today, because I was in my hidey-hole from the time Mom got up until it was time for her to go to work, so this is a pre-fire photo.  I am playing with the wand toys by myself because Mom won't always play with me.

We were so glad to be back home Sunday night that we both demanded a lot of kitty loving in bed.  I jumped up as soon as Mom got in bed and get petted just the way I like for a looong time.  Mom finally told me that she really had to get some sleep and stopped.  I stayed right where I was all night long.

Emma:  Monday morning was my turn.  After Herman got Mom up early for breakfast and we both ate, I jumped up on the bed and demanded attention from Mom.  She petted me for a looong time, until I had enough and went to sleep by her feet.  Herman was on her other side, hoping to get some more petting, too, and he did.

Karen Jo:  Monday night you both deserted me.  Herman didn't come to bed until I was nearly asleep and Emma didn't show up at all.  I guess that means that both of you are totally back to normal.  The other clues are that Herman is back to pouncing Emma and Emma is teasing Herman by jumping over him.  We had a nice play time tonight, though Herman didn't play much.  He really enjoys watching Emma play, though. Sometimes this makes Emma nervous, because he used to pounce her while she was playing.  He hasn't done that in quite a while.  Now the two of them have a staring match, then Herman pounces.

It's really too hot to snuggle.  I do appreciate all the petting, though.  You know how fickle Emma is.  She is always jumping up on the bed and down again.

Karen Jo:  You have both regained your appetites as well.  Neither of you ate well while we were evacuated.  Herman especially was off his food.  Now the food is disappearing at its normal rate.

Emma:  The kitten food bowl in my room is almost totally empty.

Emma:  Yeah, but I like the kitten food better.

Karen Jo:  There was a lot less smoke in town today.  Sunday night and Monday night, I could see fire on the ski hill west of town and on the mountains to the northwest.  Tonight, I only saw the fire to the northwest.  I hope that means that the fire on the ski hill has been put out.  I hope so.  There was a real danger that the ski lodge would burn down.  The local skiing facilities are provided by volunteers and fixing up the damage is going to take a lot of their resources.  So far the worst damage I have heard about is that the cable for the chair lift burned through.  The rainy season is due to start in two weeks and I pray that it does.
Posted by Karen Jo at 1:47 AM

we are so happy that you are safe and home!

Good to see you guys settling down after such a experience!! Now we hope it gets a little cooler for you.

It is good everyone is settling down. WE purr they get that fire out, soon!

I am glad that everyone is settling in. Purrs.

We're glad you're home! We know how much the heat stinks. And it always takes time to get resettled after having your entire life turned upside down like that.

Herman, it sounds like you and Emma have gotten back to normal faster than your human! It must feel so great to be back home.

We are relieved to hear that you are back home and safe. Sending de-stressing purrs to you Karen.

Glad to hear you are back home and settling in. Love the psych warfare between Emma and Herman.

So glad things are getting back to normal! How upsetting this must have been for efurryone. Continued purrs for the people around your community.

Have a great Thursday!!!
I hope everything´s good!

We are so glad that you are home & safe!! glad efurrybuddy is settling back to normal!

Welcome home! Wishing you tons of normality from now on!