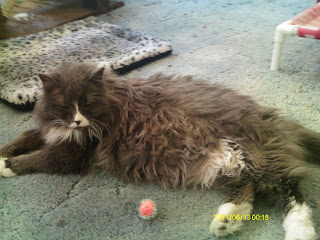 I am just relaxing in the living room.  Mom tried to get me to play a little bit, but it's just too hot during the day.  I play more at night.  I do chase Emma around some during the day because she just asks for it, but I save playing with toys for the night time when it's cooler.  Mom's bitey is all healed up now.  I have been playing with the toy box with holes in it.  It's fun to push the toys around and try to pull them out.  I get some petting time in bed with Mom every night. She says that she is going to have to do something about the little mats she feels around my armpit, but I'm not worried.  I know now that she isn't going to hurt me with the scissors, so I don't fight her about it.  I am not looking forward to it, but I don't think it will be too bad. Emma's lucky.  Her fur is shorter and not nearly as thick as mine, so she doesn't get mats.  She sure sheds, though.  She got in bed with Mom one morning for a long petting session and practically turned the sheet black with her fur.  Mom just laughed about it.  Now Mom has some stuff she wants to say. 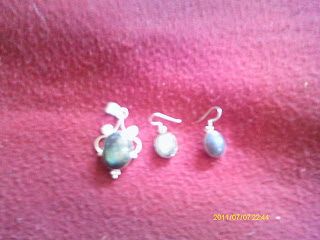 Karen Jo:  The picture doesn't do them justice, but these are the pendant and earrings that I got from the auction.  Someday I will learn how to take pictures that are actually in focus.  The best thing happened tonight.  It rained!  It didn't rain much, but it really cooled off the temperature and it got the ground all wet.  I hope it rained all over the fire.  The paper is back to normal publishing, but I haven't found out much.  A fellow says not to put out bird feed, because the bears are hungry, so I haven't been doing it.  I notice that my neighbors are all still feeding the birds and I miss the chirping.  Bears were spotted in town during the evacuation, but I haven't read any more about them coming into town after we all came back.  I think I will start feeding the birds again.  They will need food more than ever with so much of their natural food sources being burned up.
Posted by Karen Jo at 12:42 AM

I am glad things have cooled down for you a bit, even if it is still sorta hot during the day! At least you are dealing with the aftermath of the fire instead of the fire itself - that is always good!

It's so weird to imagine it being hot, it's so cold here!!

Great to know both of you are good and your mom's bitey is healing well.

And Cold down rain is nice ! I hope you all have a happy Monday
xoxo

We're glad your mom's bitey has healed too, and that you had some rain--we desperately need some too.

We are relieved to hear that you are safe and back home after evacuating. Cool rains sound good too. Sending purrs your way that the fires go out soon.

We actually got a bit of rain yesterday, also......enough to measure!!!!!!! But not nearly what we need here....our drought continues.

We send our love to the three of you.

Those poor bears--but you all stay safe from them!

Herman we do the same thing here...just too hot to play during the day. Stay cool and enjoy your night play. Hugs and nose kisses

Thank goodness for rain! Maybe it will cool off enough that you'll play in the daytime too, Herman.

Oh we hope the rain helped!! And bears coming to town?? Wow! That's something!!

Sounds like it's all good news. Good. We were worried. You're right the birds need a bit of help; it's kind of you to think of it.

Wow! Here is very cold because of winter. This world is really huge right?
I hope the rain will continue and bring more water and food for the birds.
Kisses

We are sure glad the fire is gone an you are are back! But watch out fer the bears. We hear they are worse than Vishus Deer!