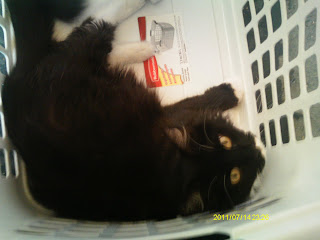 Mom never posts on Femme Friday any more, so she said I could have Caturdays.

Karen Jo: My friend and I have gotten into the habit of going out together on Thursday nights and I don't feel like blogging when we get home.  Most of the time we don't get home until bedtime, anyway.  It gives us both some much needed R&R.

Karen Jo:  Mostly you just furred it up a little.  You did grab a couple of things as I took them out of the basket.

When you left us last night, you left something cooking that made a yummy meat smell, but we didn't get any.

Karen Jo:  I made Hungarian pot roast in the crock pot, then put it away when I got home.  You weren't interested in it today.

Herman was, but he didn't like it after he tried it.

Karen Jo:  I left the onions out, so it would be kitty safe, but I guess kitties don't like tomato sauce, paprika and caraway seeds.

At least you finally got some more kitten food.

Karen Jo:  And after all your begging for kitten food, what were you eating this morning?

The duck and pea dry food.  It is pretty good stuff.  It's a lot better than that weight control stuff Herman eats.

Karen Jo:  Herman eats the duck and pea, too.

Herman eats almost anything.  I don't know what he sees in human food, but he is always trying to get some.

Karen Jo:  Herman loves steak.  You didn't even come into the room while I was eating my steak on Tuesday.

I enjoyed watching you crawl around yesterday, looking under the couch for lost toys.

Karen Jo:  I found quite a few, including both nip balls.  I also found the beat up Bird.  I put it on the line with the "new" one to make a bigger toy to play with.

I like it.  We played for quite a while tonight.  Herman decided he would rather eat than play.

Karen Jo:  I don't think either of you eat very much in the heat of the day while I am at work.  I keep finding uneaten Stinky Goodness in your dishes.  I also gave Herman his yucky pill just before playtime.  He was probably trying to get rid of the taste or maybe his treats made him hungry.

Treats are another thing I don't understand why Herman gets so excited about.  I will mostly eat one if you offer it to me, but I won't ask for one.

Karen Jo:  You and Herman are very different.  I like it that way.
Posted by Karen Jo at 12:12 AM

Oh my goodness, we always get the munchies when we read about all your Mom's yummy food she cooks! We are so glad that you and Herman are doing well, eating and settling in well. That is a relief. Have a great weekend everyone.

We all love cleaned warm clothes! So nice ta nap on. The TBT wont disturb us. He doesn't mind furs.

Emma, you're adorable in that laundry basket. :-)

We prefer cat food, too, always are intrigued by the smell of the mom's food, but not interested in eating any. That's okay. More for her, she says.

Treats, now, are another matter!

Happy weekend to you all!

I think your human needs to make some crock pot cat food! Mmmm, chicken that melts in your mouth...

We're sure your Mommy appreciated all that help with the laundry, gorgeous Emma=we know from experience furring up those clean clothes is hard work and of course, you are really adorable in the basket, sweetie!...Happy weekend, precious friends...kisses...Calle, Halle, Sukki

Love to you, Herman and your mom.

Have a wonderful weekend.

PLay time and treats! YOu two have it made!

Emma, you and Herman certainly are living the good life! Mommy wants to know if she pretends to be a cat if she can move in? She says she eats table food!

We like how you and Herman are different too, Emma. It makes things really interesting!

We want to thank you for dropping by with encouraging words for Cookie. We are hoping he will regain at least some of his sight back. Right now he is just happy to be home.

That conversation about all the good stuffs to eat done made me hongry. Now I have to be led down the hall by the Mouskateers to the fun room for a slurp of something and some crunchies. Maybe a bowl of cereal and milk ..... left-overs for MikiCato. Others don't like milk.

Have a great evening, and come see us when you can. Thanks for the last visit at Buddy's World.

If the kitties don't want the pot roast, we'd love some!