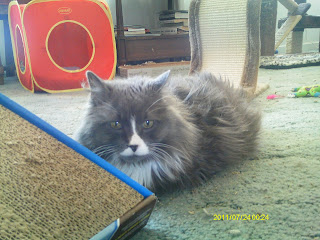 I was just playing with the dangler inside the Alpine scratcher.  Emma hasn't discovered it yet, at least not that Mom has seen.  Mom is giving me treats for scratching, but only three at a time.  I just wait a while on her days off and start scratching again.  I scored about twelve treats on Tuesday.  Mom gave Emma a treat while I was getting mine and she almost didn't eat it.  Mom was just on the point of giving it to me instead when Emma finally decided that she wanted it.  Darn it! 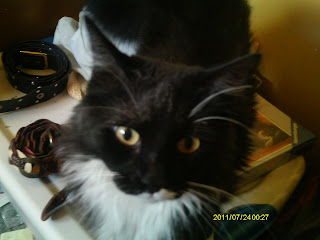 Emma: I let Mom get close enough with the camera for a closeup of me.  This is quite unusual.  I usually move away from her when she gets this close with the camera.

Karen Jo:  Sorry for not blogging in a week.  Things just kept happening to my blog time.  I was bragging last week about Herman not being jealous of Emma any more and he isn't.  However, Emma still gets jealous of Herman under certain circumstances.  Emma jumped up for her morning petting and she took Herman's usual spot.  Herman jumped up on the foot of the bed, but gave Emma room.  I reached way down to pet Herman with my right hand while I was petting Emma with my left hand. Emma smacked Herman right between the ears, then grabbed my wrist with her teeth and bunny-kicked my arm.

Emma:  Herman was moving in on my petting time.  I am fixing him now, though.  I am jumping up on the bed at night before he does and grabbing his spot.  Now I get the night petting.

It doesn't bother me.  I know that I just have to wait and you will jump over to the rocking chair.  Then I claim my spot and get my petting.  Mom bought chicken, but still hasn't cooked it.

Karen Jo:  Stuff happened to my cooking time, too, so I put the chicken in the freezer.  I will cook it tomorrow for sure. The two of you have been a bit friskier lately.

The weather has cooled off a bit.  Emma is running all over the place during the day again.  I am feeling up to trying to grab her as she darts by. I haven't caught her yet, but I am getting very close.

Karen Jo:  I wonder what you would do if you did catch her.

I am not sure.  Kitty wrestling doesn't seem to be our style.

Karen Jo:  The weather is cooler because the rainy season has started.  It either rains or threatens to rain every day.  It isn't raining nearly enough to mitigate the drought, though.
Posted by Karen Jo at 1:32 AM

Emma, bunny kicking your mom? I've nefur bit or kicked mom. But, i know a thing or two about sisfurs! Haf a happy Thursday! Purrs.

sounds like you haf fun at your house!! we likes to run around and bunny kick too!

We're glad for the update and that you're both feeling energetic with the temps a bit cooler!

I think both of those pictures are absolutely terrific!!!

The weather has cooled down a bit here too, and I have been going crazy, running around and talking to myself!

Mom says every night seems like a full moon around here lately. Maybe that's how you feel?

Snookums is the one who likes the danglers around here. Great close-up!

It sounds like you and Emma are figuring out the best petting time for each other!

Well clearly you are a cat's best toy! We hope you all sweeten up - and cool off this weekend.