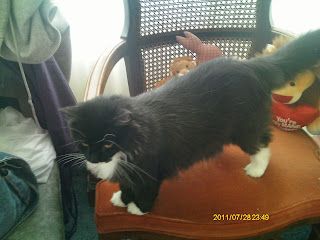 Karen Jo:  I noticed that neither of you think of stuffies as toys.  I even bought one just for you to play with and it always gets ignored when I get it out. Maybe I need to roll it around in nip or something.

It has been forever since you put some new nip out.

Karen Jo:  The two of you don't seem to need it.  You are lively enough as it is.  I will try to remember to put some out on Sunday, though.

There is this very interesting smell in the kitchen.

Karen Jo:  I am finally cooking the chicken.  I used the recipe that Herman likes -- the one with the Swiss cheese.

I noticed Herman in the kitchen earlier, meowing at you.

Karen Jo:  He wanted some cheese, so I gave him a little.

You didn't give me any.

Karen Jo:  You didn't ask for any.

I probably wouldn't like it anyway.  Herman has started chasing me again.  I like it when he will play.  I have been very playful.  I got one of the balls out of the toy box with holes and knocked it halfway down the hall.  Even Herman has been fishing toys out of that box and playing with them. It's fun.

Karen Jo:  I am really glad that the two of you are enjoying that toy box so much. At first I wasn't sure that Herman would like it.  I knew that you would, though.

Karen Jo:  You are certainly putting some wear on it.  The feathers are looking pretty scraggly.  You don't mind that a bit, so there is no point in getting a new Bird for it yet.

I am glad that you started feeding the birds outside again.  I like to watch them.

Karen Jo:  I enjoy the chirping.  There are definite signs of wildlife coming into town.  I saw a bunny on my way to work a couple of days ago and I saw a coyote while I was coming home from work tonight.  The paper had a story about a mother black bear and her cub who were in someone's back yard. The fire burned up a lot of their food, poor things. At least the fire is almost out now.  The rains have really helped.
Posted by Karen Jo at 12:43 AM

Lucky kittehz! Chick-hen wif cheese sounds nommy! We are so happy to hear about the fires, but sad about all the displaced wildlife. Purrs.

Why do humans think we kitties would enjoy playing with plush toys? There are like dozens here and I have never shown an interest in them. The dog chewed on a few of them, and we had one kitty visitor once that dragged them around and tried to kill them, but seriously, they aren't that much fun.

We're glad the wildlife is returning -- this is a great sign!

Hello sweet Emma! That's a nice collection of stuffies you've got there!

Chicken and cheese sounds delish - what time's dinner??? Mum puts a couple of stuffies on the bed in the daytime and we both ignore them!
We're glad to hear the rains have helped a bit - we suppose lots of wild life has perished with the heat and the fires.
Luv Hannah and Lucy xx xx

Rough summer with the fires and the heatwave, but glad you guys are finally getting some relief with rain...Bird TV sounds like a great way to spend the weekend; good to hear you guys are having fun playing together, but we think nip rolled toys sound really awesome :)...Happy weekend, precious friends...kisses...Calle, Halle, Sukki

We like that picture of you because it shows off your beautiful whiskers! Our Mom loves cat whiskers!!
Happy Saturday,
~ The Bunch

We are glad things are getting back to normal for you all. Da Bird is a really cool toy Emma!

Kirby talked Mom into shooting the foam darts down the hall. He loves to chase them! We did not realize the fire was still burning! We hope you get enough rain to put it put!

We don't play with stuffies either. They won't roll around and we like to roll things. Sure glad the fire is almost out, we feel sorry for all the critters that lost their food supply. Hugs to your mom for feeding the birds. Hugs and nose kisses

Emma, we sure like that picture of you, you are soooo pretty! We don't play with stuffies either, we prefer to beat the stiffing out of each other, instead. It's fun to hear that you and Herman play all the time now, you are just the sister he needed to make his life complete.
And, we are very happy to know the fires are about out.

We don't care about the stuffies either, unless they are in our way and then we whap them on to the floor.

We only like the stuffed toys that our mum fills with catnip......