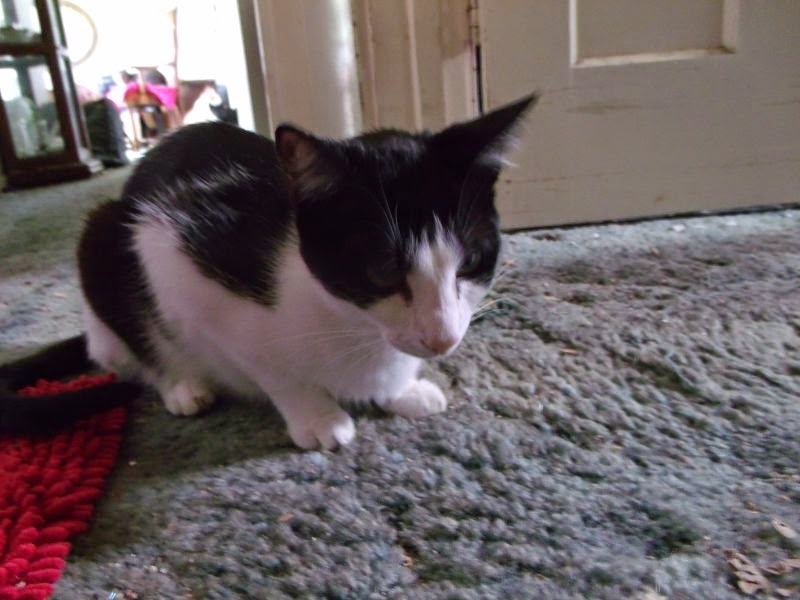 UPDATE:
I got home with Brody a little while ago and so far it's mostly good news.  His fever is gone.  He is eating better.  That part had me scared.  He went from 10.3 lbs on July 17 to 7.6 lbs yesterday.  He is feeling better.  He is a bit more lively than I have seen him in the last few days.  I misunderstood what the vet was saying.  She said his FeLV might have given him FIV not FIP.  That brings his chances up for survival of #6 from nil to maybe.  Of course if both his FeLV and new FIV are active now, his chances are pretty slim.  He came home with amoxicillan in case it's pneumonia, prednisolone in case his FeLV is suppressing his appetitie and polyprenyl immuno in case he developed FIV.  The bad news is that we (the vets and I) don't know what he has yet and won't know until Monday when the results of his latest tests come back from the lab.  Thank you for all the purrs, prayers, healing light and kind thoughts you have already sent.  Please keep it up for little Brody.  Cissy sure was glad to see him again.

Karen Jo: I hate to go from a party post weeks ago to a Purrs post, but I feel that it's necessary. Brody was having what looked all the world like dry retching when he went into his wellness exam on July 17.  I asked if it could be coughing, because I had never seen a cat cough and wouldn't know the difference.  The vet said that his chest was clear and for me to give him a hairball remedy.  When I went in for a consultation on Thursday about Horus, who hasn't been very nice lately, I mentioned it again and was prescribed some Laxatone and told to bring Brody in if he wasn't better in 3-4 days.  Three days ago he started acting sick and I called as early as I could on Monday to get Brody an appointment and got him in yesterday afternoon.  It wasn't good.

His temperature was 104 F.  The vet did x-rays and a large blood panel.  His albumin and red blood cells were low and his white blood cells were a little high.  He has a large amount of fluid in his chest cavity, but only one side.  She sent me to the large emergency and specialty animal hospital in Santa Fe, who kept him overnight to drain his chest and whatever else they thought necessary.  That vet said he needed more in hospital care, so now he's in his regular vet's for more x-rays and to have the chest fluid analyzed.

Here are the possibilities as to what is wrong with him, given in the order of his chances of long-term survival:

2. He has pneumonia.  His chances of a full recovery are very good.

3. He has the type of FeLV that attacks the lungs and brain and he is having a flare-up. He might survive this attack.

5.  His FeLV has given him cancer in his chest cavity.  Chances of long-term survival next to nil.

6. His FeLV has given him FIP.  Chances of long-term survival nil.

Oh no, poor Brody! Paws crossed that whatever is going on, it is one of the lesser issues. I'm sending lots of purrs his way.

Poor little sweetheart. We're purring loudly for Brody and our human is sending universal healing Light. Ditto, we hope it's something that he will recover from fairly easily.

Poor Brody. We're sending loud rumbling purrs his way and we'll be saying our purrayers for it to be something that is easily treated with a good prognosis.

We are all sending our very best purrs and prayers for dear sweet Brody.

We are purring that it is a lesser issue you are dealing with. Keep us posted.

Oh gosh Karen Jo, I am so heartbroken to learn about Brody. Sweet boy. If I can help, let me know. And you have the arms and paws around you for support from a very large and caring community.

We're purring loud and hard for Brody. We sure hope it's none of the bad things and that Brody's feeling better soon.

Mom and I send lots of hugs and purrs to you all and especially Brody!
Madi and mom

We are sorry to read about Brody and hope that it's something with the best chances for quick healing. You have our purrs and our prayers for him. xx

oh geez....we are sending LOTS of purrs your direction

I am so sorry.

XO,
JC and The Purr and Fur Gang

Oh Brody, we are so sorry you are sick. We sure send tons of purrs and prayers. And sure hope it is one of the easy problems. We also have all our paws crossed for both of you.

So sorry Brody is going through this, Karen Jo. I know it is a frightening time for you. Sending purrs and tail wags for Brody's recovery and a warm hug for you.

Totally purring for one of the recoverable options and sending love and hugs to comfort you.
RedSetter

The kitties are purring very hard for Brody!

Sending lots and lots of prayers and hugs.

We'll be anxiously awaiting an update...

Oh noes!
We are sorry to hear this .
WE will be purring as hard as we can for Brody.
Purrs Georgia and Julie,
Treasure and JJ

We are purring very hard for deal Brody.

Poor Brody. We are purring and praying that it is something that can be remedied. Please keep us posted. Hugs to you all.

Sending all the POTP that we have and also lots of pawhugs and prayers. Feel better soon, Brody.

Poor Brody. I am sending lots of purrs for him.

Poor little boy! We will certainly purr for him big!

We're sorry to hear Brody is not well. We're purring mega purrs for him and hope he can kick this.

we will be purring and praying for brody.

Many hugs and purrs and purrayers for Brody and for you! It is difficult to have a sick kitty, let alone one with FeLV, and possibly other issues on top of that.

Hugs and luf, Us and Maw

We'll be purring and purraying for Brody (and you)!

We are so sorry that Brody is so sick and are sending our best purrs and a hug for him and also to his worried Mum.
Luv Hannah and Lucy xx xx

Poor darling. I am sending much love and hugs that you will get through this and soon be feeling much better. Take care little one and much love to you too Karen Jo xx

Oh Brody, you have been in the wars so I am sending you lots of love and rumbly purrs to help you out. Paws and tails crossed here for you sweet fella

Oh, Brody, we are sad you are going through all of this. You are in our purrs and prayers. (((hugs)))

We are so sad to hear little Brody is not feeling well. We are sending healing purrs and pawsitive light. We has our paws crossed that he is better soon.

We will pray for Brody.

Grace and her boys are purrrrrring hard for Brody. Marilynn once had the joy (and the heartache) of a li'l darlin' who had the same struggles, so she's praying for Brody's return to good health, too.

Love, all of us
Marilynn, Grace, Audace, and Ruse

We are purring and purraying so very hard for sweet Brody. Sending him all our best healing vibes.

We are also sending you positive vibes, Karen Jo. You are such a wonderful, caring cat mom!

All of us are praying and praying for your sweet Brody. Paws double crossed.
With love,
Angel Normie, Mika, Sasha & Grady Lewis

I just read about Brody on the Cat Blogosphere site and came over to wish him well. I am glad to read the update and know that he is somewhat improved, though I know there is still much to worry about. He has a lot of people on his side. I hope your next update is an even better one.

Thanks for the update....we'll continue the purrs and prayers.

We're late, sorry ! We send our purrs to Brody ! Purrs

Sending purrs and snuggles to help Brody feel better. Please keep us updated as our mommy is a terrible blogger and doesn't update our blog, let alone check all our friends blogs.
Feel better, Brody!
Taz, Runt, Charles, and mommy, Anna, in IL

Thanks for the update, we will keep praying.

Brody, you dearest little boy. Precious small soul. I will purr for you and mom will include you in her prayers, Guaranteed. xoxoxoxox

Lots of and purrs and prayers for you Brodie!
Hugs from your TX furiends,
Samantha & Mom

We are sending Brody our best purrs and prayers.

All paws crossed and purrs on the way for a speedy recovery, Brody.

We're sorry it has taken us s long to visit, but we wanted to let you know we are purring for Brody. We hope things are looking better for him, poor fella. Bless you, Karen Jo, for taking such good care of him and the other FeLV positive cats.