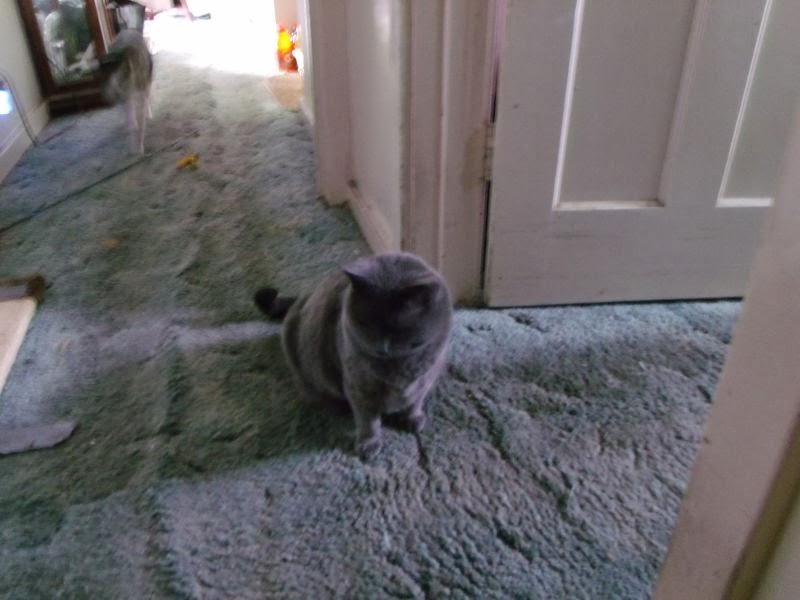 Oja : I can NOT believe what Mom has done to me.  Yesterday afternoon she left the house with an empty PTU.  That's NEVER a good sign.  Sure enough she came back with yet another stinky boycat in it.  I'm standing by the bathroom door, just up the hall a bit from the safe room where he is thankfully behind a closed door. 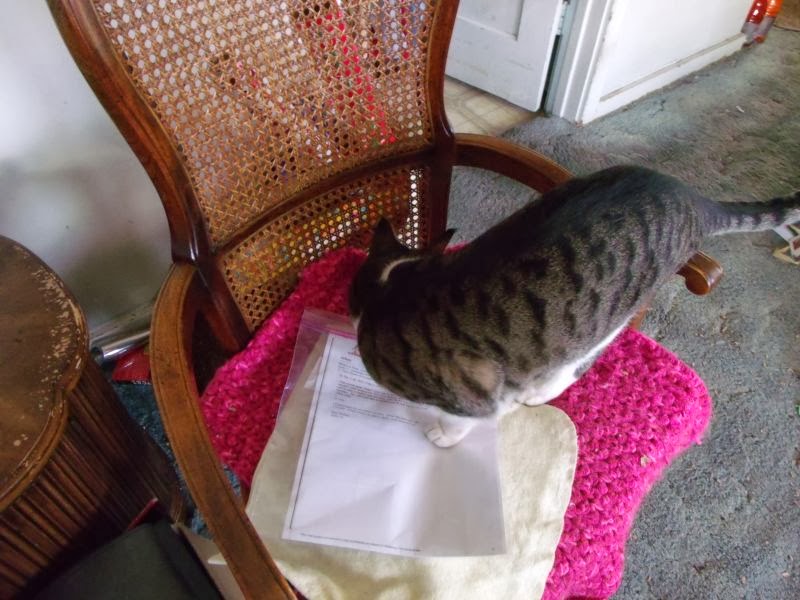 Spyro:  He's not so bad.  I greeted him when he arrived and sniffed him over.  He's just a little guy.

Oja:  The little ones are the worst.  They run all over at top speed and think they can pounce anycat.

Spyro:  I'm checking out his papers.  They say he's a five to six month old orange tabby with white.  Besides, Oja, you like to play as much as the rest of us.  I saw you chasing Bambino down the hall this morning. 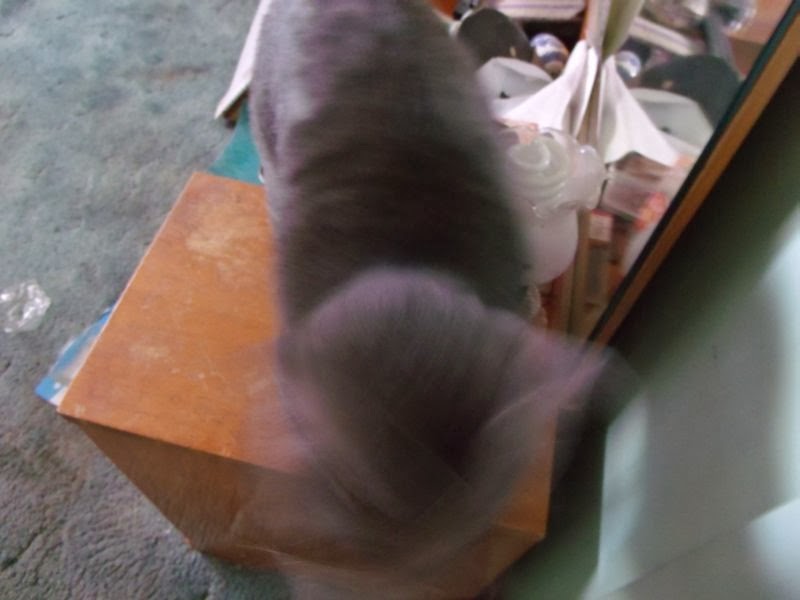 Bambino:  I'm so excited that I can't stand still for a moment.  I wanna play with him sooo bad.  I bet he's gonna to be a lot of fun.  I snuck in his room for a minute today, but he wouldn't come out and play. 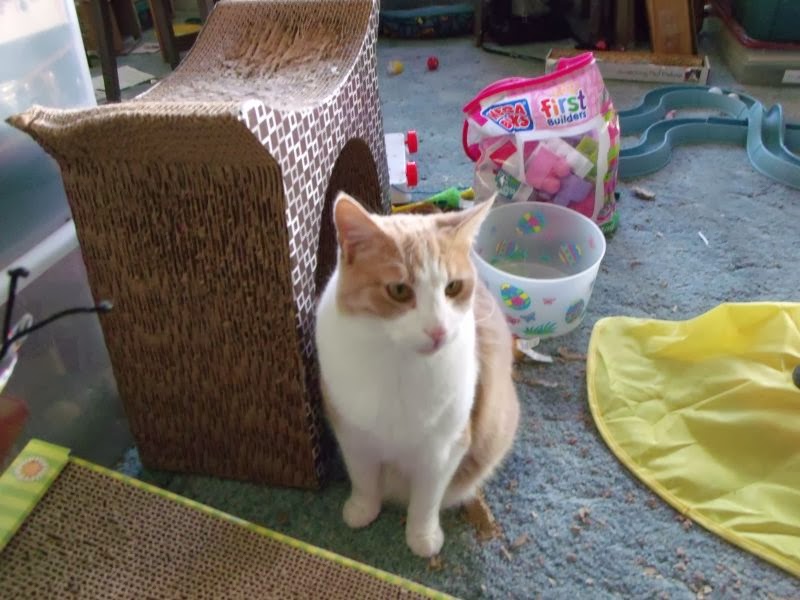 Rocio:  This is going to be so cool.  He's an orange and white tabby like me, but he has a lot more orange on him that I do.  I sniffed him over when he arrived, too, and didn't hiss at him at all. 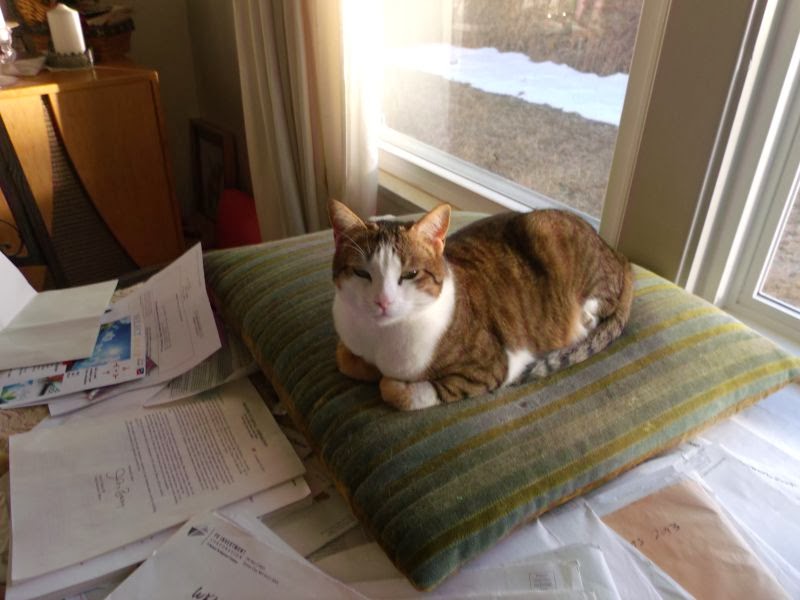 Horus:  New arrival, hmff.  I don't care enough to give up my nice sun puddle.  I'll check him out when he's out of the safe room.

Karen Jo:  I got an email a couple of days ago about a five to six month old male kitten caught in the Santa Fe TNR program.  He was neutered and taken back to where he was caught, but this smart kitten refused to leave his cage.  They took him back to the shelter, where he was very friendly toward the staff, who decided to put him up for adoption because he wasn't really feral.  That's when they found out that he was FeLV+.  The shelter contacted the Humane Society, who contacted Felines and Friends, who contacted me.  A shelter employee who lives in Los Alamos brought him up to a meeting place for me yesterday and now there are six kitties in residence.  His name is Julius and he is mostly orange tabby with just touches of white here and there.  He has very interesting markings on his sides.  He is shy and hasn't let me touch him yet, although he purrs loudly when I go in to visit him now.  I haven't been able to get a picture of him yet, as he hid all afternoon and night yesterday and most of the day today.  He did come out and move around the room late this afternoon, but I didn't have the camera with me, as the light was fading.  It is going to take him some time to adjust, because this is the first time he has been in a home and everything is new and scary.  I think he will eventually fit in just fine.  He didn't hiss at all when the other cats came up to his carrier to check him out.  He was sniffing them right back.  He did hiss at Bambino when Bambino got into his room and got too close, but it was just a little hiss.  I guess I'm a fully fledged crazy cat lady now.

I want to thank everyone for their expressions of sympathy about my depression.  The medicine has taken hold now and I'm back to my old self for the first time in a long time.  I haven't been blogging because I was very busy before Christmas and came back from my visit with a cold that sapped every bit of my energy for a good week.  I'm all well and feeling great now.  We all hope that everyone had a great Christmas and a wonderful New Year.
Posted by Karen Jo at 9:08 PM

Aww, congrats on the new addition! Rumblemum says he sounds so cute... we're commiserating with you guys about a new addition!

He will settle in and have lots of love.

We love the name "Julius" for an orange kitteh. So clever!

Good luck on your new addition and welcome Julius!

I'm glad you are feeling better and I can't wait to meet Julius! I bet he will fit right in.

Aw, congratulations on the new addition! Can't wait to see him!

Congrats on your new addition...can't wait to see pics of him! I think it is wonderful how you have committed to helping these positive cats.

We are looking forward to meeting Julius and hope he will settle in quickly and enjoy having fun with his new family.
Luv Hannah and Lucy xx xx

Welcome Julius and we can't wait to meet you. Glad you are feeling better and you've got your home and hands full now! :)

Oh, wow...! Welcome to Julius. We hope it doesn't take him too long to settle in and we have our paws crossed for his integration.

And we're very glad you're good now! Modern pharmaceuticals can be a true life-saver, literally, as our own human knows from past experience.

we are glad you are feeling better. and concats on (and THANKS for saving) the new addition

Concats on your new addition. I can't wait to see Julius!He is a lucky kitty to have his Forever Home with you.
Happy 2014 to you.

So nice to see you back and it is so nice you are giving another kitty a happy!

How nice that you took Julius in! We hope he adjusts quickly and everybuddy gets along.

And we're glad you're feeling better too!

Herman, your mom has a really big heart and that's a good thing. Yeah, you may have to share her a bit more, but more sharing means more loving all the way around, so it's a win win for everyone.

So glad you are doing better, Karen Jo! :)