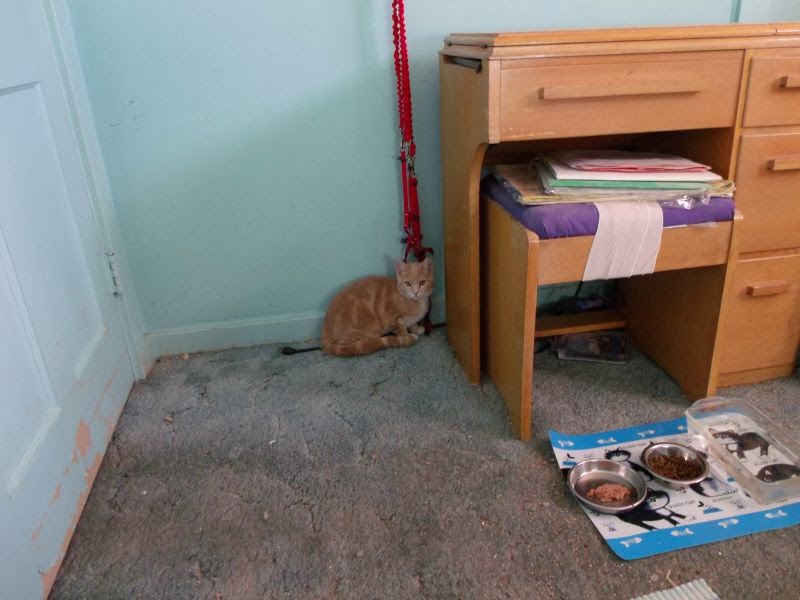 Karen Jo:  I was gone for most of the day, helping a lonely old man find a new dog, so the only picture I managed to take was of Julius, so he rules the blog today.

Julius:  It's a mystery as to whether I was really a wild kitty or an escapee, so formerly feral fits me, as I was classified as feral.  See, I was cold and hungry outside when I saw this box with food inside, so I went in to eat and couldn't get out again.  Some people came and took me to a place that was warm, but smelled funny.  They poked and prodded me and upset me, then I went to sleep and when I woke up, I thought something was missing, but I wasn't sure what.  I did find myself in a warm but small place with food and water and I liked it.  Then one day the people came and put me in a box and took me back outside in the cold.  There I was, back where I started, and I didn't want to be there.  I absolutely refused to leave the box when they opened the door and sure enough, they took me back to the warm place.

Julius:  I got poked and prodded and stabbed, then put back in my warm little room with people who came and got me out and played with me and petted me and I was happy.  Then a lady came with one of those boxes and took me away.  I was not happy.  Then another lady came and put me into another box and took me out in the cold and we went bumping along for ages.

Karen Jo:  Seven minutes -- the time it took me to walk home from the meeting place where I met the worker from the shelter and picked him up.

Julius:  We went inside a warm place and there were kitties all around me when the lady put my box down.  They seemed like nice kitties, both of them, and I sniffed them back when they sniffed me.  Then the lady picked me up again and I found myself in this room with yet another kitty checking me out.  Then the lady opened the door to my box and I came out.  The three other kitties all crowded around me and spooked me, so I ran under a thing on wheels to hide and I hissed at the gray kitty who tried to follow me.

Karen Jo:  That was a mistake on my part.  I should have shooed Spyro, Bambino and Rocio out of the safe room before I opened the PTU door.  Things were going so well that I thought the kitties might all get along from the start, but I was wrong.

Julius:  Now I have a room all to myself, lots bigger than the first room I found myself in, and it doesn't smell funny and nobody is poking or prodding or stabbing me or stealing my stuff.  I have discovered that they took the tip of my ear off.

Karen Jo:  Julius was caught as part of the TNR program, so he had his ear tipped before they tried to release him.

Julius:  I'm warm and I have lots of food and water and litter and toys and room to explore and I'm happy again.  I don't trust this strange lady, though.  I purr at her when she comes to visit me, but I won't get very close to her.  I did sniff her hand late this afternoon, but I won't let her touch me.  No way am I letting any lady get close enough to me to put me in another box.  I have had enough of boxes.  I am a bit curious about the other kitties.  I can hear them through the door and one on them likes to play pawsies with me under the door.  Sometimes the gray one gets into my room, but the lady shoos him out again.  A bigger gray and white one got in once, but he just wanted to eat my food and the lady carried him out right away.

Karen Jo:  I think Bambino is the one playing pawsies with Julius.  He spends time outside the safe room door.  Julius spends time beside the door on his side, sniffing and listening.  He even made biscuits on the bottom of the door, purring like mad when I visited him late this afternoon.  I think he wants to meet the other kitties, but perhaps the sheer number and size of them scares him a bit.  I think that he will come around, once he figures out that he is here to stay and stops being afraid of me.
Posted by Karen Jo at 10:16 PM

Aw, Julius is a DOLL! He reminds me so much of Scouty when he was a kitten. Hello, lil' guy!

Julius I think your days of being poked and prodded and stuck in a box are over! At least for a few months, and then you'll just get returned home! I'm sure you will enjoy the other kitties when you have had the introductions.

It will be okay Julius, you will find out you are finally nice and safe.

Julius, you're a beautiful cat, and you've hit the jackpot, buddy.

Yes, Julius is a very smart kitty! Wonder if he once lived inside? He's got a good home now.

Julius - welcome to the good life!! It's great that the TNR people decided to give you a chance at being an inside kitty, I hope it all works out and you learn humans can be nice.

Julius, soon you will realize you are in a fine home with neat kitties and Karen Jo :) We bet you will be comfy and feel at home in no time!!
We wish you all the very best for 2014!
Purrs Georgia and Julie,
Treasure,JJ
and Angels Tiger and Tillie

Thank you for your kind thoughts and purrs
when our Tiger crossed the Bridge.
She was a sweet kitty ans we miss her lots .

You have a lovely new family now Julius so try and be brave and get to know them. I am sure you will be happy and have lots of fun.

Hi ya, Julius! Thanks for telling us your story. We bet you'll be furiends with those other cats in no time!

Julius, you are a handsome boy!

Juius, that part they took away is just trouble. You are better off without it. Marley, MOL!

Aw, Julius. What a story you have to tell! It may take a while, but you will get used to the nice lady and your new home. You were very smart to refuse to leave the box on that cold day. Look at the good things that happened to you since then.
Good luck little buddy.

Julius, you are such a cute mancat! You've found a great home, so try not to be too scared, ok?

Julius, you DID hit the jackpot. Trust the Lady. She will always take good care of you.

Don't you worry, Julius. We bet before long, you're gonna love it there. And you'll see that that lady is the BEST, and those kitties are great. :)