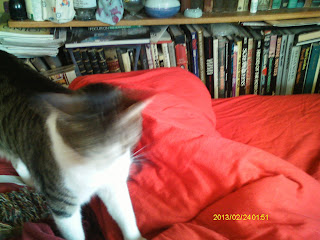 Karen Jo:  I was going to dedicate Fridays to Femme Friday with just Oja and not the boys, but she hasn't done anything noteworthy since yesterday.

Oja:  How would you know?  You were gone most of the day.

Karen Jo:  That's true.  I had a doctor's appointment, my allergy shots, shopping for a new handle for the screen door, putting the handle on, taking the handle off and exchanging it for one that worked, putting the new new handle on and picking up my prescriptions.  So let's just say that I didn't see you doing anything blogworthy, OK?

Oja:  Oh, all right.  But I better get next Friday.

Karen Jo:  I thought it might be fun to post the pictures that I took that didn't turn out as planned.  Spyro loves to shake his head as I push the button. 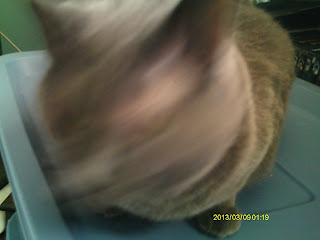 I wanted to record Emma's ascent to the top of  Spyro's tower (a bunch of storage boxes piled on an end table), but she was in a hurry to get down after she saw me.  She didn't want me to know how high she can get now. 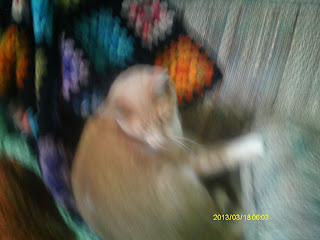 This one was due to my shaky hands.  Hopefully there will be less of this.  I bought a new camera.  It's bigger and heavier, but it is a big step up from the little point and shoots that I have been using up until now.  It also has an anti-shake setting, which I will be using all the time.  In case you can't tell, this is Austin. 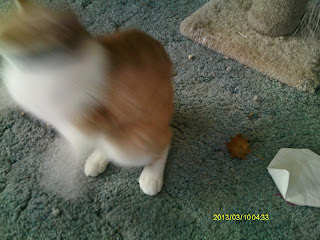 :Rocio has been taking camera-avoidance lessons from Spyro.
Posted by Karen Jo at 6:30 PM

Whoa! Did TW come over there and take these photos? Hope your new camera works. And, BTW, I saw Oja doing inneresting stuff.

When my human takes photos like this, she tries to pretend she is being "arty." Ha!

Hahahahahaha!! We love how you show your Mom that you do not want your pics taken ;) heehee
She will get used to the new camera though!
Have a Happy Easter !
Purrs Tillie and Georgia,
Treasure,Tiger,JJ and Julie

You'll soon get used to your new camera - it's always the same with anything you buy. Now at least you could smile for your Mom when she's using the camera!
Luv Hannah and Lucy xx xx

heh heh...you are all good at making out-takes!

Mommy says she sympathizes with the door-handle thing...the first part is never the right one. *sigh*

Oh no! Now that your mom has a new flashy box, you're gonna be subjected to many photo shoots!