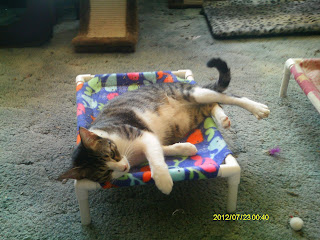 Spyro:  The ham-mick that Mom won in the auction arrived!  I helped Mom put it together, then I got first dibs on being in it.  If you look closely, you can see that I have catnip all over my fur.  Forty Paws is generous in packing catnip with their ham-micks.

Karen Jo:  The main reason that Spyro got first dibs is that he was on it most of the time I spent putting it together.  He loves it. 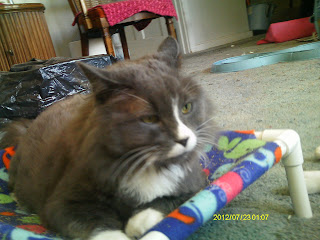 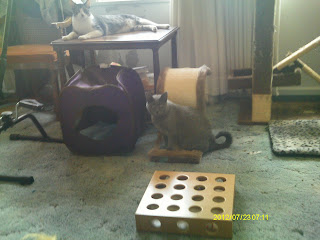 Oja:  I don't see why the boys got so excited about the new ham-mick.  I sniffed it, then decided to use the scratcher.

Spyro:  That's because you have never been in one.  Mom has been taking us outside again.  I got to go out for a long time yesterday.  I have gotten used to my harness and don't slink along on my belly anymore.  I even run with it on, making Mom run, too, just to keep up.

Going outside is great, but Mom made me come in early.

Karen Jo:  That's because there were two cars parked in the carport and on the driveway.  You were far too interested in going under them.  With the roads being torn up around here, I often have cars parked in front of my house.  I gave my neighbor permission to park in my carport and the other car just showed up.  I can't blame them.  Parking spots in this neighborhood are at a premium.

Oja:  I found out that the boys have some pretty cool toys.  See that box with the holes in it in front of me?  It has toys in it that I can fish out.  Some of them are so cool that I carry them to my room to play with them. I have gotten used to the mancat stink on everything and now I don't mind it.

Karen Jo:  There has been no hissing or growling for a couple of days.  Spyro and Oja play THoE together, taking turns chasing each other up and down the hall.  Herman and Spyro are closer friends than ever.  I am really glad that Spyro came here to live before Oja did.  I think he is the glue that will hold our little family together.
Posted by Karen Jo at 12:48 AM

I am so happy to hear that things are going well between the three of you!

So glad to hear everyone is getting along. The new ham-mick looks nice, glad you boys are enjoying it.

Oja, we thinks you should try the ham-mick we bets you will like it.

Great ham-mick, Spyro! You certainly seem to be enjoying it...and the nip. LOL.

Paws crossed that everything continues to go well among the three of you!

We re so pleased to hear that Spyro and Oja play THoE together does Herman play too? What a great hammick with that lovely nip stinky.
Luv Hannah and Lucy xx xx

WE are glad you are all getting along better!

What a great hammock! And I am glad that you are all doing so well together.

Have a nice day and a delicious Friday!

Our mommy is sooo jealous that you are all getting along so well...Taz still hisses at us, although not as much. Mostly when we surprise her...(hehehe)
So, enjoy one another and we'll stop by and catch up with you all soon.
Snuggles,
Taz, Runt and Charles in IL

That is good news that they are all getting on well together.

We are so happy everyone is getting on so well.

We are so happy everyone is getting on so well.

We're glad the hissing and growling has stopped.

You guys look so happy in your hammock! And how exciting to go out on a harness! Hmmm, we wanna move in with you guys too!!

We're glad you all are getting along. Oja, you gotta try out that hammick. You'll love it!

Being the gluey kitty is a very special job, Spyro! ~ Marley

Such a great ham-mick! And how nice that you boys are sharing it so nicely. :)

We are SO happy that you're all figuring things out.