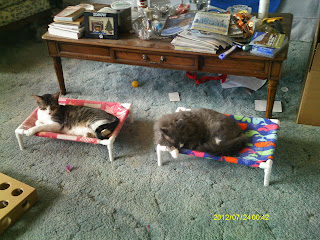 Having two ham-micks led to our each having one, which was great.  Somehow that led to this: 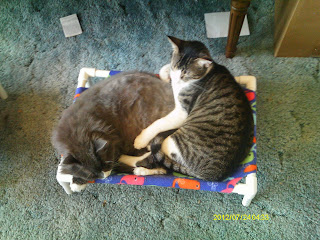 Spyro:  If I hadn't heard Mom turn on the camera and lifted my head, you would have seen me using Herman for a pillow.

Karen Jo:  I see this as a great advertisement for the sturdiness of Forty Paws' ham-micks.  This one is holding almost 27 pounds of cat. 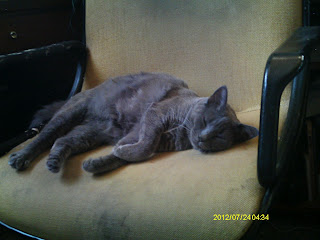 Oja:  I still don't see what the big deal is.  I prefer to sleep on chairs or up on my windowsill or in a hidely-hole.

Mom got a new swivel chair and put it in the living room.  It's great for napping.  All of us have tried it out.

Karen Jo:  That one is for when I get my office set up in the forbidden room.  I have the desk and chair now.   All I need is the get up and go to get it organized and cleaned up.

Get up and go?  That's a laugh.  All Mom has been doing lately is lying around, watching TV.

Karen Jo:  The Olympics are on and it has been twenty years since I could really just sit or lie down and watch them.  My lying around so much has left you kitties to your own devices and what have you done?

We all made friends with each other.  Spyro and I both let Oja lick us, though Spyro is apt to turn it into a game of chase or rasslin'.

Spyro:  It's great.  I have two rasslin' partners now and one partner for chase games.

Oja:  I think it's OK.  Neither one of the boys has licked me, though.  I hang around next to Herman sometimes and I play with Spyro.  Mom is surprised that Herman and I don't fight over the bed.

Karen Jo:  Yes, I am.  Oja has taken Herman's old spot next to my chest at night and Herman doesn't seem to care.  When I am lying on the bed in the evening, watching TV, Herman will come up sometimes and claim his old spot.  That makes both of us very happy.  Last evening, we were together like that and Oja jumped up on the bed.  I thought that there would be a fight, but there wasn't.  Oja looked things over, then decided she would rather have the computer chair.  When Oja is next to me and Herman jumps up on the bed, he claims a spot near my feet.  Sometimes Spyro jumps up on the bed too, but he never stays long.  Spyro just isn't a bed cat, at least not in warm weather.  I imagine that they will all pile on when it gets cold.
Posted by Karen Jo at 6:08 PM

Oh look at those two sweeties in the single hammock cuddling!

It's nice that you all are getting along!!

Aren't ham-micks the best? We love ours, but have never shared. So glad to hear things are peaceful at your house. xoxo

Yay! Everybody is getting along - how cool!

How pawsome. We're so glad you have all teamed up.

It's so great to hear you guys all getting along so well, and to see CUDDLES! Who would have thought, and in such a short time!

What a great update! We're thrilled that Oja seems to have accepted both Herman and Spyro and that everyone is getting along!

We are so happy to hear that everyone is getting along so well.
My husband said this is the first time in his life he has been able to watch the Olympics too without worrying about getting up the next morning for work.

That is sweet to see them in the Ham-Mick together.

Love that sharing-the-hammick picture! We are so happy that you are all getting along so well. So happy! :)

It is so nice when all the kitties get along!

So glad you all are getting along really good. Goodness Karen Jo your family is getting bigger. Did you ever think it would swell to three kitties after making up your mind to adopt a cat? Oja, you have a great forever home, you to Spyro. Had to scroll your blog for a couple of months to see what has been going on. I really do like your header picture. Take care Karen Jo and God Bless.

those ham-mick thingys look great. We gots to show the Momma! Looks like you are having fun just hangin'
Nice to meet you,

We gived you an awardie!