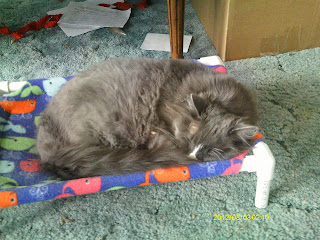 We are really enjoying our ham-micks.  We get in them to nap almost every day. 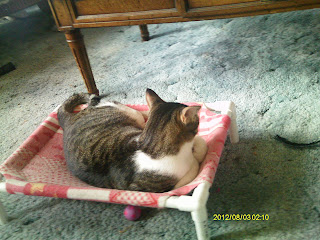 Spyro:  I think it's funny that I often take Herman's ham-mick and Herman takes the one that Mom got for me. 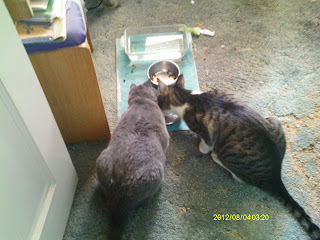 Oja:  This picture is to show just how well we are all getting along.  That's me and Spyro eating out of the same dish in my room.  A few weeks ago I would have whapped him a good one if he had tried to share my food.

Karen Jo:  We haven't posted in like forever, so what would all of you like to say about what you have been doing?

I miss being next to Mom when she goes to bed.  Oja usually beats me to it.  The other night, I was first.  Oja jumped up on the bed after I had gotten all settled in and Mom expected a showdown.  It never happened.  Oja did what I usually do:  looked over the situation and decided to snuggle down somewhere else.  Mom often wakes up in the morning to find all three of us in bed with her.  I still rassle Spyro sometimes, but mostly he and Oja rassle.  Yesterday I saw Spyro having so much fun with the nip nanner that I rassled him for it.  I got it for a little while, then Spyro started the rasslin' again and we both forgot about the nanner.

Spyro:  I love rasslin' with Oja.  She is nearer my size, being only one pound lighter now and Mom thinks she might have even grown a little bit since we got her.  I don't see how, as she is two years old, but she does seem a little bigger and not just around the tummy.  It's funny.  I'm the cat who eats the most, but I'm the only one who hasn't gained weight.  I think it's because I run and jump up on stuff more.  I have given up on jumping in the laundry basket when it's on top of the dryer now.  I did it a while ago and it fell off the dryer with me in it.  I haven't been up there since.  I am still the top escape artist.  I have stopped being afraid of Mom's foot.  She used to be able to stop me from slipping out screen door when she opens it by putting her foot in front of me.  I know full well that she isn't going to kick me, so I just jump right over it and head for the back yard.  Mom is still amazed at how close she can get to closing the door and I still fit through.  She has to put her hand on my head and keep it there until she has the door almost shut and sometimes I still get through when she has to let go to get her hand out.  When she is going to carry something outside, she shuts the kitchen door as far as it will go, then opens the screen door.  I can get the kitchen door open, but it takes me longer to do that than she needs to get out the door.  I love going out in my harness and leash, but I haven't been getting to do that nearly as much as I want to.

Karen Jo:  I rigged the kitchen door so that it can't shut completely.  That's so the wind won't blow it shut and latch it so you can't get in or out.  You haven't been able to go out in your harness as much because the days have been crazy hot and it has been raining in the early evening.  YAY!  It can be pouring down rain and you will still be by the screen door begging to go out.

Oja:  It is so much nicer now that we all get along.  I rassle and groom Spyro and he rassles and grooms me back.  I groom Herman sometimes, but he doesn't groom me back.  Once Mom even saw him push me away with his back paw while I was grooming him.  Mom hasn't ever seen me rassle Herman.

Karen Jo:  I recently read an article on Cat Wisdom 101 on cat behavior that said that grooming another cat indicates that the groomer accepts the groomee as a member of his/her group.  I think that maybe now Oja is more accepting of Herman than he is of her, even though I have seen them eating side by side.  I guess that would mean that Oja and Spyro see only one group of three cats and Herman sees two groups with himself and Spyro as one group and Oja by herself.  If so, I bet it is because she beats him to his accustomed spot next to me in bed.  They have never fought over the "best" spot or even contested the other one when they find him/her already there.  It's just a feeling I get from Herman.  I also haven't seen any of the dominating behavior from Herman toward Oja that I saw him do toward Emma.  I think Oja has more confidence in herself than Emma had and won't put up with it.  I saw  Spyro chase Oja into the bathroom one day and Oja jumped in the tub to escape him.  When she had enough of being in the tub, she just jumped out right over Spyro.  Emma would have been cowering in front of the tub and yelling for help.

Karen Jo:  I don't know why Oja won't play with toys in the living room.  Maybe she still doesn't feel completely at home there.  She mostly naps in her room or in my room, though I have seen all three of them in the living room napping with Emma in Herman's bed and the boys in their ham-micks.  Ayla, Iza and Marley gave us an award ages ago.  This post has gotten so long that I will save it for tomorrow.
Posted by Karen Jo at 4:27 PM

Labels: getting along, ham-mick, harness, outside, rasslin', toys

We love seeing how you all get along. Enjoy your hammocks!

The three of you getting along sure makes my heart smile. Bravo gang!

Herman, Spyro and Oja, thank you for sending kind purrs for Scooter. I have told him about you :) He never had a hammick. He is very big and I'm not sure he would fit on one. I've just bought him a lovely big soft beanie bed. It had a picture of a golden labrador on the label!! I'm not sure where the dog would go though...

Terrific to hear you are all pals now. It's always better to be in a gang. Karen Jo, I wouldn't worry about Oja - Au has hated cat toys from the second he came to live with us. I think he thinks they are vulgar :-)

Hey, mebbe iffen you got Mom accustomed to doing certain play things at the same time each day, that would help.

Fer example, I wait all day fer TBT to est dinner cuz he tosses me mousies while he eats. So I know ezactly when to expect that. Knowing when is helpful, cuz I can plan where to be around that time.

I'm sure Marley and Ayla have similar timed habits, but quite frankly, since they dont involve ME I dont know what or when the are. ~ IZA

We're so glad to hear you all are getting along! YAY!

I'm glad you guys checked in, and everything is going so well! We kitties settle in with each other in our own time, so you are all doing it right on schedule!

I'm glad you guys checked in, and everything is going so well! We kitties settle in with each other in our own time, so you are all doing it right on schedule!

We are so glad to hear everything is going well! Enjoy your ham-micks. We love ours. XOXO

That is so terrific that all of you are getting along so well. Sounds like Oja is getting used to everything. You three sure have it nice at that house. What a good Mom you have for sure.

We are delighted to see that you are all getting on so well. It sounds as though Oja is much more relaxed now.
Don't forget to give your Mom head bumps to thank her for looking after you all.
Luv Hannah and Lucy xx xx

Maybe Oja feels the living room is for company and special occasions only and is doing her part to keep it neat!

Hi Oja!!! Waving paw!! I am so glad to hear you are coming out of your room and the boys and you are doing better. I mostly play in our bedroom, which was my first safe place, and now I play some in the living room and in our office...but I always run back our bedroom...you and I are a lot alike Oja! And my goodness, I did not know there were so many of you...what an anifamily! Oh yes, would you add a follow by email button so I can follow you? Paw pats, Savannah

You three really make us smile! We are so happy to know you're all getting along so well! :)

We are so glad that all three of you are getting on soooo well. We've all been together 7 years and I still whap everyone. Jinx is the only groomer in our family and he grooms all of us, including Mom. Well I groom Mom too but she's mine. Maybe you can pass your secrets of getting along to us and perhaps we could work out our differences.