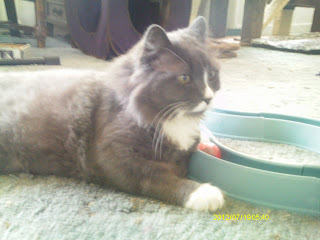 The sunshine was bright today.  I was hanging out in the living room, away from the other two.  When Oja first came out of her room, Spyro and I got closer to each other.  We would sit together and nap together, but not touching. Today something remarkable happened: 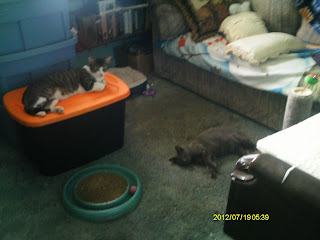 Spyro:  Oja let me come hang out with her in her room.  She's not so bad.  She hasn't growled at any cat today at all.  She stopped hissing at us a couple of days ago.

Karen Jo:  I don't know how long they were together like this, but I snapped the picture just in time.  Not more than a minute later, Spyro came back into the living room to see what Herman was doing.

Oja:  Spyro's not so bad.  I don't hiss any more at all and I have almost stopped growling.  I even let Herman get close to me, but I ran away when he tried to sniff my tail.  Nose-sniffing is fine, but I draw the line at tail-sniffing, at least for now.

Spyro:  I came back into the living room because I was afraid Herman would be lonely.  A couple of hours after these pictures were taken, Herman and I curled up together on the couch, using each other for pillows.

Karen Jo:  You would wait until there wasn't enough light to get a decent picture.  This is the first time that I have seen Herman and Spyro snuggling.

Spyro:  I had to do something.  You wouldn't take me outside.

Karen Jo:  I apologize.  I was expecting a very important phone call.  I even delayed my dinner until it came. I told you that I would take you out as soon as I ate, but when I finished you and Herman were snoozing so peacefully together that I didn't have the heart to wake you up to go outside.

Karen Jo:  I have a message for all of you who have my e-mail address.  My ISP had two domain names and decided to drop one.  My e-mail used the one that got dropped.  That's why I couldn't get my e-mail.  The domain name changed from vla.com to losalamos.com.  If you forget, I am still getting mail addressed to vla.com, but I don't know for how much longer.
Posted by Karen Jo at 9:14 PM

Labels: getting along, nap, outside, snuggling, sunshine

We draw the line at tail-sniffin too. Mommy says there is just sumthin creepy bout it. We are so glad you kittehz seem to be makin progress. Happy Friday. xoxo

I think tail sniffing is rude! I don't like it when Binga does it to me... and I only do it to her when I am trying to insult her!

Awww, you guys are becoming such good pals!

Enjoy the company of each other!
Have a great weekend!

I don't know how long Ola has arrived in your home, but it seems to me that it goes better and better ! Besides Rosie and Arthur, who are often together but not so much anymore like in the past, Pookie became an only cat and doesn't like any cat coming close to her, while Kim becomes more and more autistic and avoides us and the cats ! She is always outside and comes only in for food. Strange cat. And I know her since she was born !!

It's lovely to see that they are getting used to each other and feel more comfy together.
Luv Hannah and Lucy xx xx

I like window whiffin better than tail whiffin! Nice to see you getting more social Oja!

We're glad you all spent some time together.