Who's in Spyro's Room? 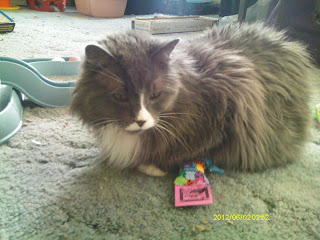 I have claimed this catnip bag and I'm not letting Spyro have it. 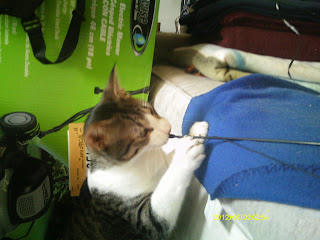 Spyro:  I don't care.  I am going to chew on this wand to let Mom know that I want to play with the wand toys.  It worked, too.

Mom was acting all mysterious again.  She got up way early and moved some litter boxes around and shut the door to Spyro's room after taking food in there.  Then she took a PTU and left.  After a long time, she came back with something in the PTU.

Spyro:  It's another cat.  One who snarls.

Karen Jo:  I got a call from the Espanola Valley Humane Society yesterday.  The shelter had another FeLV+ kitty and did I have room for her?  I thought it over for a few seconds and said, "Sure."  Herman's foster Mom and I went and picked her up this morning.  Her name is Oja (O-ha) and she is two years old. 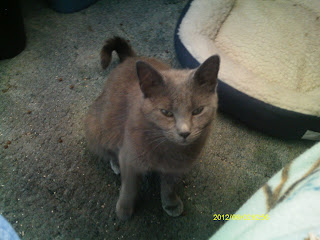 Oja:  Hi!  I don't know quite what is going on, but it seems things are looking up for me.  I had a home, but a few nights ago, my people put me in the metal monster and took me somewhere and put me in a box and left me.  In the morning some people took me inside a big building that smelled like lots of cats and dogs and put me in a cage and left me there, except to take me out and steal my blood and poke me with needles. This morning they took my out and poked me one more time, then put me in a PTU that smelled like other kitties and this lady put me in her lap in a metal monster and we rode for a long time.  The the lady took me out of the metal monster and took me into a house, but it wasn't my house.  She put me down on a box and two giant kitties came to sniff at me.  I snarled at them to back off.  Then the lady took me into a room and let me out.  I was scared.  I slunk out of the PTU and found a hidey-hole.  Then the lady left me alone for a while.

Oja:  The lady came back again and sat down on the couch. After a little while I came out to see who she was.  She isn't one of my people, but she's a nice lady.  I loved all over her and she loved me back.  She told me that this was my new forever home and that she was my new Mom.  That's OK.  I like her.  She let me rub kitty-snot all over her face.

Karen Jo:  You are going to the vet as soon as I can get you in to see if that drippy nose of yours is a kitty cold or allergies.  It's completely clear and you aren't sneezing or coughing, so I'm guessing it's not too serious.  I wash my hands and face after leaving your room, so I don't pass anything along to Herman or Spyro -- the giant kitties you saw.

Karen Jo:  You will stay in this room by yourself at least until I get you checked out to make sure that you are well.  You can stay in here as long as you like after that.  You are scarcely any bigger than Emma was and I don't want the boys bullying you.  I am guessing that Spyro would just want to play, but Herman bullied Emma a little and I don't want a repeat.  I am hoping that with Spyro to play with, Herman won't consider bullying you to be worth his while.

Welcome ... to both Oja and Spyro! What beauties each of you is!!

Spyro - Welcome to the Tabby Cat Club. Be nice to Oja (at least while Mommie is watching!)

Wow, we get to do 2 welcomes in one visit.

First, welcome to blogging, Oja. You're going to like your new home.

Second, welcome to the Tabby Cat Club, Spyro. Glad you joined. See you there.

Welcome to The Tabby Cat Club Spyro! We are so happy to have you in the club and look forward to getting to know you better. You sure have a wonderful place to be staying with Karen Jo and Herman! Way to go!!!!

Happy Gotcha Day, Oja! Well, this family certainly has grown and we wish you the best! We know everyone will be well loved and happy.

Paws up, Oja! I am glad to meet you and I bet underneath your nervousness, you are an awesome kitty!

Oja you are beautiful! We can't wait to hear all about your adventures in your new home!

Happy Gotcha Day Oja - you are going to love your new Mom and your brother Herman.
Luv Hannah and Lucy xx xx

Welcome Oja and hope you will settle in and love your new home. I hope that runny nose is just maybe a little stress related and that it will soon settle.. Hugs GJ xx

We are glad to meet you, Oja! Welcome to your new home, and we're sure you will be well-loved there.

Oh Oja, it is so nice to meet you! You are gonna LOVE yer Forever Home... And Herman an Spyro, eventually...

Hi Oja and welcome to your Forever Home. You are a sweet little girl.

Hello little Oja, you are such a pretty girl and that's a very sweet name you have too. Your life just got 200% better now you are home with Karen Jo and the boys. Just you wait and see...

Happy (belated) Gotcha Day, Oja. You have a great noo furrrever home. Enjoy, and don't get too scared by all the big, fearce kitties .

Happy Gotcha Day Oja! You are a pretty little thing!

How exciting to have another cat...hope everyone gets along as well as Herman and Spyro have!

Wow! Mommy takes a few days away from checking the bloggies and you two get a new sister! Welcome, Oja! We are Taz, Runt and Charles over at 3 kats and a kwilter and we are happy to meet you.
Taz still hisses at her brothers, so don't let it bother you. They will work out a system that works for them. In Taz's case, she just wants the boys to let her me and for mommy to give her head rubs and snuggles from time to time.
So, welcome little one!
Snuggles and purrs,

How wonderful!! Oh Oja, you are so going to love your new home.
These are the bestest souls ever!
WELCOME HOME. And happy gotcha day.
PeeEss, you sure looks like me!
Love, TK