Turn Your Face Away 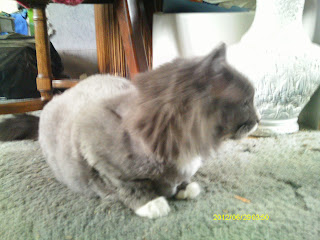 Hahaha!  All three of us turned our heads just as Mom pushed the button on the camera today.  I don't know why Mom makes such a big deal out of Spyro and Oja having froot-bats.  I certainly don't have them.

Karen Jo:  I think your ears are really cute, Herman.  I also like froot-bats. Spyro really has them and Oja sort of has them, too.  What was the deal with waking me up at O-dark-thirty this morning?  You walked all over me, patted my face with your paw and when I kept telling you that it wasn't anywhere near time for breakfast, you started nipping my toes.  When I finally got out of bed and followed you down the hall, asking you to show me what you wanted, you headed into the kitchen.  I turned on the light and you dived right into the kibble.

I just wanted some light and company for my early morning snack.

Karen Jo:  You used to do that when I first adopted you, but you haven't done it in over a year now. 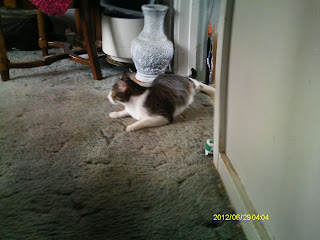 Spyro:  When Herman left this spot in the kitchen doorway, I grabbed it.  It's right in the breezeway and it's a favorite resting spot around here.  I got Mom up at dawn for breakfast.  That's usually Herman's job, but he thought that Mom might be a little ticked off at him, so I did it.  Mom thought she would fool me by grabbing the mail right after she gave us lunch, but I still got halfway out the door before she caught me.

Karen Jo:  You are amazing.  Sometimes I look all around and you are nowhere in sight.  I start to open the screen door, and there you are, trying to get out.  I am going to have to start putting you out of the kitchen and closing the door before I take anything outside. 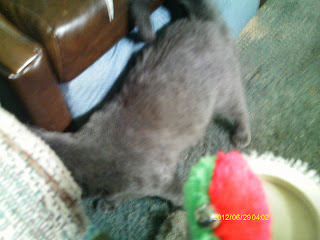 Oja:  I was looking right up at Mom when she pressed the button, honest.  You can see my tail in full curl in this picture.  I had another adventure today.  Mom opened the door to get me fresh water and left it open to clean all the litter boxes, so I could get some fresh air.  I went out to explore Mom's bedroom again, but didn't stay.

Karen Jo:  I saw you heading back to your room from mine as I came out of the litter box room on my way to clean the box in the entry hall.  I don't know if you didn't stay in my room longer because Spyro was up on my windowsill watching the road work or because Herman was starting to walk down the hall.

Oja:  Herman kept coming closer to me, so I hissed and growled at him, but Mom didn't come.

Karen Jo:  I heard you, but I decided to finish cleaning the box in the entry hall before I came to your rescue.  I would have come running if I had heard anything out of the ordinary.  When I got to your doorway, you were standing in front of the door, glaring at Herman and he was just standing there, watching you.  Herman retreated and I started cleaning your box.

Oja:  I ran for my hidey-hole and that Herman actually had the gall to come into my room!

Karen Jo:  I was right there to prevent anything bad from happening.  Herman just wanted to sniff the places you had been sitting and lying down.  He needs to get used to your scent, just as you need to get used to his.

Oja:  He can sniff me under the door, as Spyro does.  Anyway, Mom took away my fishie and gave me a different toy yesterday.  I didn't touch it.  She gave me back my fishie today and I played with it.  I hope she has learned that I only want to play with my fishie.

Karen Jo:  You really like your silver vine fish. I think I better order some more of them.
Posted by Karen Jo at 5:12 PM

Those silvervine fish are so popular. We love ours too. Herman is in charge around there so you two better get used to him. Have a great evening.

MOL! We love ta look away from TBT at the last moment. He hasta delete a lot of bad pictures...

I love NOT looking at the camera! It drives my human crazy.

Excellent job of camera avoidance! Now, if only our humans would get the message....

Herman don't worry about not having froot-bats, you have lovely compact ears and should be proud of them.

Spiro you are a slippery eel! Brief escapes can be fun but don't stres your Mum too much!

Little Oja, we are so happy that you are having fun playing with your silvervine feesh. That's wonderful. Soon you will be playing with all the toys!

Thanks for popping by with birthday wishes yesterday!
~Jimmy xo

I think you all just got even with the flashy box!

You guys are so sweet <3 Now thanks to your influence, next time our mama brings out the flashy box we shall turn away!

Beautiful Oja, Spyro and Herman! You are keeping mum on her toes!! Yay!!! Maybe you can reward her by showing your beautiful faces when she takes out her flashy box!! :-) Take care
x

silvervine is just so yummy - we love ours!

Good to hear things seem to be settling. Herman, you are a kind, generous, SHARING cat.