To Play or Not? 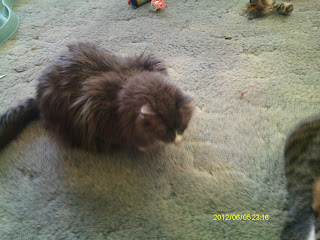 I am watching Spyro play with the Neko Kragonfly.  I chose not to play. 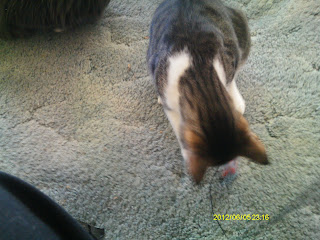 Spyro:  I love playing with the Kragonfly.  I caught it and now I am chewing on it.  I found a new way to start a rasslin' match with Herman.  Mom was lying down on her bed watching TV and Herman was lying at her feet.  I jumped up on the bed and started licking Herman's head.  Before long we were rasslin', right on top of Mom's legs.  It was fun.

Karen Jo:  You always have lots of fun, Spyro.  I tossed a soft rubber ball in the bathtub with you so you could play tub hockey.  You played for a little, then picked up the ball and took it into the kitchen, where there is more room to knock it around.  I didn't really like the fun you had attacking my ankles today, though.

Spyro:  You wouldn't let me lie on the newspaper on the table, so I had to find something to do.

Karen Jo:  I only moved you down to the floor so I could turn the page.  I didn't so much mind your attacking my ankles as the fact that you drew blood.

Spyro:  I didn't mean to hurt you, honest.  I was just playing.

Karen Jo:  I know you were, Spyro, just take it a little easier on the claws next time, OK? 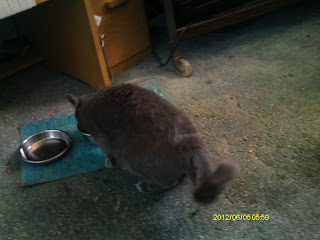 Oja:  I am munching my kibble.  See the curl in my tail?  Sometimes I curl it up like a chow dog.  I had a little more diarrhea, but it has stopped again.

Karen Jo:  I was feeding you Fancy Feast with Gravy.  It seems that is a bit too rich for you, as well.  I put you back on the plain pate style and the diarrhea stopped almost immediately.  I took you on a tour of the house yesterday.  What do you think of it?

Oja:  I like the house, but I just had to hiss at the giant gray kitty.

Karen Jo:  That was Herman.  I feel pretty sure that he won't hurt you, Oja.  I accidentally left your door open the other night and nothing happened.  When I discovered it, you were up on the windowsill and both the other kitties were in the living room.

Oja:  You don't visit me enough.

Karen Jo:  I know, Oja, and I feel really guilty about it.  I never knew a kitty who wanted as much loving as you do.  It is just that you hurt me almost every time I visit you.  I got so many pinpricks in my upper chest that I had an allergic reaction to them.  Now I wear a towel around my neck and chest when I come to visit.  This afternoon you stuck your claw in my upper lip.  That really hurt.

Karen Jo:  I know you don't.  I just wish you would keep your claws in when you pat my face.

Karen Jo:  I noticed.  I put toys in your room and they are all right where I left them.  I got a new scratch pad for the Turbo Star Chaser and tried to get you interested in it, but all you did was watch the ball go around.  I waggled a nip nanner under your nose and you didn't care.  I don't know why you don't play.  You are only two years old.
Posted by Karen Jo at 10:25 PM

Kitty love... sometimes it's so intense it's painful! Spyro and Oja, you guys are rough!

We think Herman and Spryo get along quite well!!! Typical rambunctious boys ;)
Oja,it seems you are still nervous and may need your claws trimmed. It is good that you like Karen, but remember she is not a pincushion :)
heehee
Purrs Tillie and Georgia,
Tiger,Treasure and JJ

Sounds like every one is doing all right. We don't have one of those Kragon fly toys. I bet it is fun.
Oja, you remind us of our kitty sister, Baby Doll. She doesn't play with toys either. Guess you just don't know what they are. Maybe when you get a little more comfy there, you will start playing.

Oja perhaps when you watch Herman and Spyro playing together you will join in and have fun with them.
Luv Hannah and Lucy xx xx

It may be time to leave the door open a little more each day! Oja, we know it is scary, but if you need the attention, you need to be brave!

Okay guys, you two need to be helping Oja adjust and then tackle the playing skills!

There are 6 of us here, but my claws are the only ones that seem to bother the Lady. When I scratch her, she gets itchy red swollen places. No idea why. I like to use my claws during kitty luvs too. Lots.
Midnight

Spyro, we love our Neko Fly too!

Hi Guys!
Thanks for visiting us! Me has only been your your Blog a few times. This flies is really something else!
Me and my hairy slobbery sister Bob wants to thanks yous for stopping by and your kind words. Bob is a little worried abouts the operation but she says she has not been able to sees out of that eye for awhile. She will be happy when the headaches is gone.
Kisses
Nellie

Little Oja, it's sometimes hard for a kitty to play when they have been through a lot of stressful times, we can forget about playing. But you have landed firmly on all four of your prickly paws coming to live with Karen Jo.

When it's time for you to mingle with the boys, you will see them playing and we're sure your play skills will come to the fore.
Would you be a good girl and let Karen Jo give your claws a tiny trim?

It sure sounds like you're all doing well (Mom Karen Jo, we sure hope those kitty love wounds heal soon). Oja, we bet Spyro and Herman will be happy to teach you how to play!

Hey, so you guys got a new sister too? So did we! Is yours as much of a pain as ours is?

Hello gorgeous Spyro and adorable Oja!! Awwww me and Charlie can feel the special bond you have with mum, Karen Jo! She is amazing and you two are boisterous and beautiful!! We also say a big hello to handsome Herman!! Take care
x

Gosh, more new inmates? How exciting! Herman, you are a furry kind and generous kitty to share your mum. We hope Oja learns to keep the claws sheathed.

Herman, you're getting a full house and it's great mom is sharing her love and getting you all such terrific toys! We don't visit as often as we'd like, but we're so happy to meet Spyro and Oja and know it's just a matter of time before Oja learns kitty social graces!

Mommy just checked to see if there was any news on how Oja is adjusting and she's worried because there isn't any. How's everycat adjusting? Do you guys (and girl) like catnip and would you like a couple of mom's catnip mice to play with? Drop our mommy a note if you would like a couple.
Snuggles and purrs,
Taz, Runt and Charles