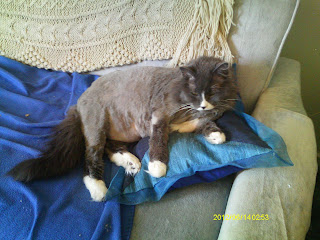 Mom did it!  She went and got me a full lion cut.  She took this picture the day I got shaved, but I look pretty much the same now.  I didn't enjoy having it done at all, but I am glad she did it.  I don't have any more mats and I feel much cooler.  Before the shave, I was just lying around all day, not doing much of anything.  Now I have my energy back and I'm playing with Spyro again.  I even spent some nights snuggled up next to Mom, which I hadn't been doing because it has been so hot.  It's been too hot lately to do that any more, at least not for the whole night.

Karen Jo:  I am glad that you are enjoying your cooler lion cut, Herman.  I love it when you sleep next to me at night, but I really understand why you are doing it so seldom now.  It's been in the 90s everyday for a couple of weeks now.  I have been a really bad blogger and I apologize, but the heat got me down.  I will just have to make myself do it.  It's not that I don't enjoy it once I get started, it just seems like too much work in the heat.  I know that 90 isn't so hot for a lot of you, but it used to be rare up here in the mountains and I'm not used to it. 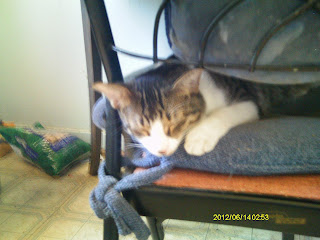 Spyro:  I am sleeping under the kitchen table on one of the chairs.  I like this one because it has a soft cover on it.  It's cooler here where I can catch the breeze that blows from the kitchen window to the living room window.  I still play a lot, usually in the mornings and evenings.  Herman and I both sleep a lot in the afternoon.  Know what I discovered?  When Mom opens the screen door just wide enough to stick her arm out and grab the mail, I can slip outside.  I got out three times today.

Karen Jo:  It amazes me how small an opening you need to slip out.  Luckily, you never go anywhere.  Once you are out, you just stop and look around and it's really easy to get you back in.  Once I just told you to get your furry little butt back inside and you obeyed.  I am either going to have to figure out how to get the trash cans out without your getting out, too, or shut the kitchen door to the living room before I open the screen door. 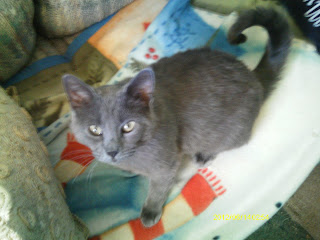 Oja:  Can you believe it?  Mom finally got a decent photo of me.  You can see both my beautiful eyes and my curly tail.  There has been some progress since the last post.  A couple of days ago, Mom left my door open for about 15 minutes and when she came back, I wasn't in my room.  I decided to explore Mom's bedroom, or at least under her bed.

Oja:  I can't help it.  Those big kitties are scary.  Mom left something interesting in my room.  I have been moving it around.

Karen Jo:  It's a silver vine-stuffed fish that I got from Nip and Bones.  Herman and Spyro weren't that interested in it, so I brought it to you.  It's the first toy that I have found moved from where I put it on the floor.  I think you like it and I hope that you are playing with it and not just kicking it with your feet as you move around the room.  I think I will switch it around with some other toys and see if you will play with them, too.

Karen Jo:  I have solved the problem with getting so many claw-pricks when I visit Oja.  I can't believe it took me so long to figure it out.  All I have to do is put on a sweat-shirt.  Oja occasionally gets a paw down the neck of the sweat-shirt and I get pricked, but it doesn't happen often.  We spent the longest time together ever tonight.  I was with her for over half and hour.  She has settled down some, which is really nice.  She used to be all over my face all the time and it would get rather unpleasant. First she would rub my face with hers, cheek to cheek, which was rather nice.  Then she would turn around and we would be cheek to cheek the other way, which wasn't so nice, especially when she whapped my face with her tail.  That short, curly tail is really strong.  I would get fur up my nose and in my mouth and kitty drool all over my face.  Oja drools, usually out of the left side of her mouth.  Ten to fifteen minutes of that was all I could take.  Tonight we did the face to face and butt to face bit for a little while, then she moved down to my chest and just looked up at me and let me pet her.  After a bit, she moved down to my lap and just enjoyed the petting for a long time.  I pet her until she decided that she wanted back up on the bookshelf beside the window.  It's cooler up there and it's where she spends the night.

Oja:  I want more sessions like tonight's.  I really liked it.
Posted by Karen Jo at 1:30 AM

I'm glad there is progress with Oja - she sounds like a kitty who takes a long time to get to know.

Hey, you actually look quite stylish in your lion cut.

Thankyou for coming around and leaving kind words. I am still very sad and cry everyday.

Herman you look very cute with your lion cut and we bet you feel much cooler and we bet it's better for playing with Spyro too. Glad to hear Oja is beginning to come out of her shell with you Karen.
Luv Hannah and Lucy xx xx

Looking good, Herman! Your lion cut helps keep you cooler, and it LOOKS cool, too! :)

Spyro, please stay in the house, okay? I know it's fun to slip outside, but it's much safer inside.

Oja ... you are BEAUTIFUL! That's so nice of you to let the Mom take your picture. We are glad you're getting more comfortable there.

Karen Jo: Don't worry about blogging with less frequency. No apologies are necessary. We totally understand!

Herman, your cut looks fab, and cool, too!

The heat gets us all down, doesn't it? My mom has been an absolute noodle.

Herman, you are very handsome with that cut. Spyro, you have sound a very comfy cool spot. Oja, you are getting very brave. THose big kitties will not hurt you!

We unnerstand about the heat. We all here wilt at 75!!!

do not worreh, i finks you is handsome all shaved.

That sounds like great progress with Oja. We are sorry it has been so warm. I think all of us are getting some of the hots. Herman you look very handsome with that lion cut and we know you feel better with it.

Herman, you look so cool(Mom says cute ) We like the lion cut ;)
We are glad you kitties are finding ways of staying cool.
It is also nice to hear Oja is making progress. Having your own room is a good thing. When Mickey was old,he had his own room and he was happy :)

You are looking very dapper in your lion cut Herman.

Herman, you look good in a lion cut! And we know you've got to be more comfortable.

We're glad to hear things with Oja are going better.

We are glad things are working out, if slowly.

Thanks to all of you for coming to our party. We really had a good time with you, and Oja's curly little tail made us all smiley.

Herman you look comfy and ManCatly in that lion cut!

You look good and very comfortable Herman. I hope you have a great day.