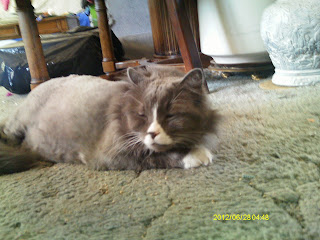 We almost didn't get our pictures taken today.  When Mom got up it was all cloudy and looked like rain, so she went to get her allergy shot as soon as she could.  She said it rained on her all the way home, which was great.  We haven't had rain in such a long time.  It really cooled things off and it smelled great.  Once the rain was over and the sun came out, Mom went for her camera, but she couldn't find us.

Karen Jo:  Once I had good light for photos, all of you had gone to your shady hidey-holes for a nap.  Herman was under the couch; Spyro was under a chair in the living room and Oja was in her hidey-hole under the corner table.  I waited until I was afraid that I would lose the light and decided to just take a picture of Spyro under the chair.  It looked like there was just enough light for that. 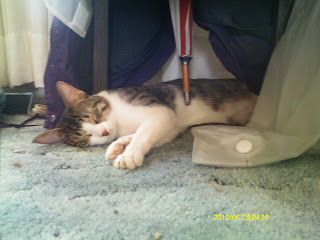 Spyro:  It's really comfy here and it stays fairly cool.

Karen Jo:  Then I decided to visit Oja and put on my sweat shirt, since it was a bit cooler, to see if she would come out for a visit, taking the camera with me.  I waited for quite a while, but finally Oja came out, yawning and stretching.  I was in the easy chair and she jumped up in my lap. 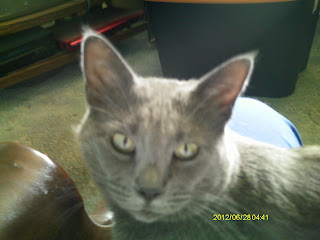 Oja:  I mostly stayed in Mom's lap, though I did smear some cat drool on her face.  I even stayed still long enough for a picture.

Karen Jo:  Looking at this picture, I wonder if you qualify for the froot-bat club.  It looks like it to me.  After my visit with Oja, I walked back to the living room and Herman had come out and was stretched out in the light, so I got a picture of him, too.

Oja:  I want to tell about my adventure today.

Karen Jo:  You did have quite an adventure.  I always leave Oja's door open while I go to get her fresh water, so I don't have to open the door while holding her water dish.

Oja:  Spyro started peeking around the door jamb as soon as Mom left.  I watched him but he didn't bother me, so I didn't hiss at him.  When Mom got back with my water, Herman was following her.  He stood in the doorway, but didn't come in, so that didn't bother me either.  In fact, I walked a little closer to him, then hissed at him.  He didn't do anything; he just stood there in the doorway, swinging his tail slowly back and forth.

Karen Jo:  That is Herman's way of expressing interest.

Karen Jo:  I couldn't close the door.  You were standing right in front of it.

Oja:  I finally walked away from him and Mom left, closing the door behind her.

Karen Jo:  I am really pleased with this development.  Herman was the perfect gentlecat.  He never moved any closer to Oja, letting her decide how much contact she wanted.  Oja didn't arch her back or poof out her tail, just hissed and growled.  Oja hasn't shown any more interest in leaving her room, but this evening Herman followed me a little way into her room when I went in to tell her good night.  Oja's reaction to that was her little "I don't like this" meow, but she didn't hiss at him.  I shooed Herman out and closed the door.  I am beginning to think that things may work out after all and Oja may eventually leave her room and really join the family.
Posted by Karen Jo at 11:56 PM

Some kitties just take longer to settle in than others. Oja is one of those.

Small steps, but it is all progress. Hopefully Oja will soon see that Herman and Spyro are not a threat to her and will start to relax when she sees them.

Glad you got some rain relief, we need it here.

Rain and good greetings--excellent start to the weekend!

That's quite a big step in the right direction with Herman and Oja.
Luv Hannah and Lucy xx xx

Rain and relationship progress- a good day all 'round.

Oh my yes, a little progress is a wonderful thing!

Perhaps Herman looks smaller and less intimidating with his shave?

Please send that rain back west to us, we sure need it.

This seems like a good development, indeed! Great job by all the kittehs. :)

And yes, Oja, I think those are some great frootbats in that picture!

Sounds like progress to us! Sometimes these things take LOTS of time. Welcome to the frootbat club, Oja. You definitely qualify.

That sounds like an excellent day for Oja and we are sure with patience and time that she will come out and join Herman and Spyro.

Every little bit of progress is good!