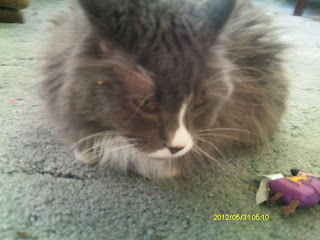 Mom has been a really bad blogger again and there has been so much going on.  We were offline and our friends Parker and Sammy left for the Bridge and we weren't there to tell them goodbye

Karen Jo:  I feel really bad about that.  I will go by their blogs tonight and say how sad we are that they left for the Bridge.  I don't have any really good reason for not blogging.  My allergies have been acting up and I have been spending a lot of time with my friend who is having a really bad time with her mother, who has dementia. 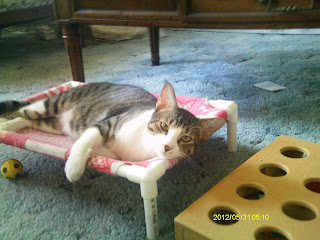 Spyro: I think Mom finally took a picture of my face that is in focus.  Can you see the little brown smudges around my mouth?  They are not from not washing after I eat.  They are just part of my markings.  I have found out that I really like Herman's ham-mick and Herman's bed.  I have my own bed in my room, but I have never been in it.  Herman doesn't seem to mind.

Karen Jo:  I really hope that this picture is sharp enough to make your Tabby Club badge.

Spyro:  You know what?  I played and played with Herman's tail while he was eating and he just ignored me.  All he did was walk away from me when he was finished eating.  I have to pounce him now to start a rasslin' match.

And I finish the rasslin' matches.

Spyro:  What do you mean?

You are always the one who runs away and I chase you just a bit.

Karen Jo:  What I want to know is which one of you is knocking over Spyro's dry food bowl and spilling kibble on the floor.

I need more kibble because Spyro eats some of mine.  He never eats his own until mine is all gone.

Karen Jo:  That's why I'm not trying to stop the kibble spilling.  Herman, you are about due for a weighing.  We'll see if I have to try to find a way to keep you from getting any of Spyro's kibble.  You are also due for some shaving.  You have gotten a bad mat on your flank again.

I don't want to do either of those things.

Karen Jo:  I know you don't like to be shaved, but you will feel better once that nasty mat is gone.  I think just a little spot shaving is all you will need this time.  If I let it go much longer, you might have to have a half-lion cut again.

I guess the spot shaving is better than the half-lion.
Posted by Karen Jo at 10:02 PM

Kittehz have a code of silence, they never tell! Let your Mom clip once and maybe she won't need to again til this fall. However, the lion cut wasn't bad at all...

Ha-ha, I see you two are even teaming up on Stuff Your Human Will Never Figure Out. Cool!

I can tell you guys are best pals, and Herman you avoid that shaver!!

Hi Spyro, nice to meet you! We are bad bloggers too, with mom being so busy. We try to post occasionally but it is very difficult to visit with mom's job and she volunteers for the humane society too. If you are on Facebook, mom finds thatmeasier to keep up with friends. :-)
-JB

It's ok that your human took some time off. They all do that to us more times than we would like them to do. Not to worry about visiting believe me we all understand.
I am a member of the Naughty Cat Club so I am betting I cannot belong to the Good Kittie club. Thought I am mostly good all of the time I thought the Naughty Cat Club would be more fun to join. Think of some events and invite members to post if you are wanting postings to be done. Should be fun. I will have to think of something and post over there. Right now I as you are having a hard time keeping with with the regular blog and getting mom to work for me. Love to all at your place.

I am glad you boys are doing okay, we've been missing you! Purrs to Mom for her allergies to get better, tis the season!

We love the conversation in your blog. It's rather typical of what goes on around here, too!! We think you guys are funnier than we are -- MUCH more entertaining!! =)

Thanks for coming by our blog to wish Grace a happy birthday!

We're not sure the kitty who runs away, er "leaves first" is the loser. Sometimes the one who stays behind is all wore out! That's OUR story, annyway...

looking good in the hamick spyro! Herman I'm sure you'll look lovely even with short furs! thanks for stopping by to wish me well :)

Awww Herman, is so good that you gets to rassle! Your new buddy looks like our outside kitty furend. Him has a dark spot on hims chin. Mommy sais it's where him spills his coffee. But I not finks him drinks coffee.
Glad you are feeling well!

it's good that you're teaming up! lol

Spyro, you are looking pretty relaxed in Herman's hammick! And Herman, it is so nice of you to share! :)

We are really happy the two of you are getting along so well. Oh, and Herman ... go with the spot shave.

Purrs and prayers for your friend and her mom, and for your allergies.

Herman and Spyro
We know you were just enjoyin some time with your Mom. It's good to just lay back and enjoy the whiffies.
We're all glad you're back though.

It's nice to hear from you! And we're glad you and Herman are getting along pretty good, Spyro!

Sometimes people-life needs to overtake blogging life. It's all good.

Most important is that you are all well. Such a nice picture of Spyro