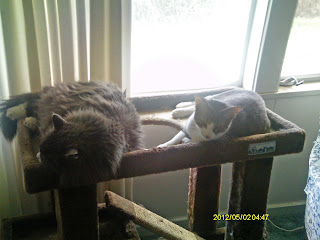 Karen Jo:  Sorry for the crappy picture, but I had to shoot into the light to get this shot.  Are you two brothers yet?

I think Spyro is beginning to get the hang of Thundering Herd of Elephants.

Spyro:  Herman is fun to play pawsies with under the couch or the kitchen door.  His floofy tail is fun to bat, too.

Just watch the claws, OK?  I bat at Spyro, too, as he runs by.  Sometimes I wait in ambush to tag him as he races by.

Karen Jo:  I think it's great that you share the food so well.  When one of you gets to the dish I put down first, the other one just goes for the second dish in Spyro's room.  Spyro has discovered that Herman's food is just as good as his, so they trade off.  Sometimes Herman eats a little Fancy Feast, then lets Spyro have the rest while he checks out the Wellness.  Since I stopped serving Medley, there is very little canned food going to waste.  I measure out the dry food and it all disappears by morning, too.  I have to take Herman in to get his mouth checked next week, so I will ask if I am giving them enough food.  I think so, as neither of them is crying for food.

Spyro:  I am exploring all the time.  There is so much interesting stuff to see.

Karen Jo:  And sometimes it gets you into just a little bit of trouble.

Karen Jo:  Like the time you shut yourself up in the litter box room.

Spyro:  Oh, that.  I jumped up on the clothes hamper and tried to get in the cupboards and something fell out against the door and shut it.

Karen Jo:  You were lucky that I was home to let you out.

Spyro:  You are home most of the time, so I don't worry about stuff like that.

Karen Jo:  If you keep playing with the door stop under the kitchen door, you are going to get yourself shut up in there, too.

Spyro:  That wouldn't be such a tragedy.  There is plenty of food and water in there.

I can let him out of the kitchen.  That door doesn't close all the way and I can push it open.
Posted by Karen Jo at 10:14 PM

Sounds like you two are gettin on famously! That makes us so happy. It's so nice when the transition is so smooth. :)

How great that you two are having so much fun together!

It's terrific to see you two bonding and getting along so well already. Wonder if it's the male-male dynamic versus the female-male dynamic...We just remember what it was like for and with Annie, after we came. And then there were issues with Emma, we remember. So it's great to see this, guys!

You two really made me smile! Yep, brothers fur sure!!!

I've gone back and read some of your earlier posts about Spyro and Herman...so happy to see they are getting along, and enjoying one anothers company!

I think it's great you guys are bros now!

Brothers are so sweet!

That is lovely to hear that you are both getting on so well together and having lots of fun playing.