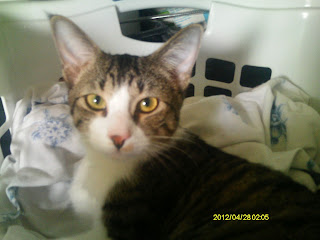 Spyro:  I found the best cat bed.  There are two big white boxes in the kitchen and this white basket full of nice soft stuff is up on top of one of them.

Karen Jo:  That's my laundry basket, Spyro.  I see that I will have to be better at folding my laundry once it is dry if I don't want cat hair all over my underwear, socks, towels and sheets. 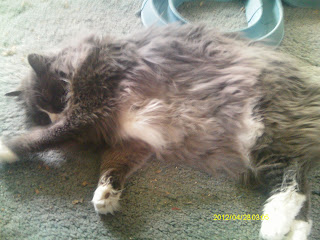 I am just relaxing while Spyro is taking a nap in the laundry basket.  I just got brushed and Mom got a lot of fur off my tummy.  Spyro is great fun, but he can be exhausting.  He is always running and jumping and playing.  I am sharing everything with him.  He even got in my ham-mick and I just ignored it.

Karen Jo:  I was a little surprised at that.  There were two places that Emma never dared to go -- Herman's bed by the heat vent and his ham-mick. Spyro chased a toy under the ham-mick, then got up in the ham-mick to reach down and bat it around some more.  Herman kept his head turned the other way, but didn't do a thing.  I think I can safely say that there is absolutely no jealousy at all between Spyro and Herman.

There is some new food around here.

Karen Jo:  I took Spyro to the vet on Thursday just for an introductory visit.  It turns out that there is no statistically significant difference in the lifespans of cats who get Interferon from the time they are diagnosed and those who never get Interferon at all.  The vet assured me that it won't hurt him.  I will give it to him on the same schedule as I give it to Herman.  Spyro might just be in that statistically insignificant group that it helps.  The vet also emphasized the importance of giving Spyro high-quality food.  He has outgrown his need for kitten food, so I went to the pet store and got him some grain-free all natural kibble from the same company that makes Herman's weight control formula. While I was there, it struck me that Spyro might be persuaded to eat grain-free all natural canned food as well.  I got him several cans of Wellness.  When I opened the first can and served some to Spyro Thursday night, Herman dashed in, pushed Spyro out of the way and ate more than half of the serving. This might help explain why Spyro attacked the Temptations that night while I was out. Friday morning, Spyro just sniffed at the Wellness.  I wanted him to eat it, so I stuck a few Temptations into it.  That did the trick. Spyro ate almost all the Wellness. Now he wants Temptations on his food at every meal.  Spyro seems to know that the food in his room is his and the food in the kitchen is Herman's.  Spyro has sniffed at Herman's Medley and Fancy Feast and nibbled at his kibble, but he cleans the dish in his room.  That brings me to a slight mystery that I found this morning.

Karen Jo:  The following paragraph contains graphic descriptions of the stuff that comes out of kitty innards, so if that makes you squeamish, just skip this bit.  When I got up to feed the boys their breakfast this morning I found a long, thin line of yack, as if the kitty had backed up while yacking, right by Spyro's food.  Closer inspection allowed me to determine that the yack was mostly kibble and it was several hours old.  I went to the bathroom and found something long, thin and dark on the floor right next to the litter box.  I thought that some kitty had kicked some poop out of the box, but it turned out to be a hairball. The question is, who did the yacking?  Spyro is the kitty who gets up the most in the night and it was his food, but the hairball was very dark gray and a Spyro hairball would be lighter in color, I think.  On the other hand, Herman has a history of gorging himself on kibble, then yacking it back up.  The color of the hairball matches most of his coat and Herman has been grooming himself much more lately.  I think Herman did the yacking.  Now the question is should I try to keep Herman out of Spyro's kibble and if so, how?

Did you really have to bring all of that up?

Karen Jo:  You brought it up first

Yuck!  That Wellness is pretty good stuff.  I would help Spyro eat it if he would ever leave any.

Karen Jo:  I am glad to hear it.  You might just get switched over eventually. When you run out of Medley I am not buying you any more.

Karen Jo: You need to lose weight.  If I don't get you any more Medley, that will cut down on the size of your meals.  You don't eat it half the time, anyway.

This diet business is really beginning to stink.

Karen Jo:  Chase Spyro around some more and you might get the weight off with exercise.
Posted by Karen Jo at 5:11 PM

I am so glad to hear that Spyro and Herman are getting along so well. THAT is fabulous. It's so tough when you are dealing with different diets. I don't know how you would keep Herman out of Spyro's food and vice versa.
purrs
>^,,^<
♥Abby♥Boo♥Ping♥Jinx♥Grace♥

I am so happy Spyro and Herman are doing so good. Furballs can be mysterious and are not limited to long hair cats. I hope the mystery reveals itself!

We eat Wellness Kitten can food and love it! It's been great for our coats and our litter box habits (Mom Paula says it doesn't smell bad as much as it used to).

We are SO happy that Herman and Spyro are getting along so well! :)

We hope you figure out the hairball mystery soon...

We're so behind on commenting...HELLO SPYRO! From our experience we all lost weight when we went off of kibble...if Herman will eat wet food we say go for it.

Hairballs aside, it's awesome that Herman and Spyro are getting along so well already!

It is great that they are getting along so well!

We are so happy to hear you two are getting along! If you ever figure out how to keep one kitteh out of the other's food, let us know first! All four of us haf different dietary needs and it about drives the Mom crazy keepin us apart! MOL!

Gosh, we are just meeting Spyro. Sorry we haven't been here. That is so exciting Herman, that you have a new roommate. How great of your Mom to take in another cat that really really needs a home. You are too cute Spyro. You sure did find one really good home. Good to meet you.

Nice to meet you, Spyro!
I love reading your kitty conversations.
Tommie says thanks for the birthday wishes. We were too busy celebrating to post yesterday.

We love that Herman an Spyro are adjusting to each other so easily and quickly! BTW, when we dont eat our canned food, TBT puts down a couple regular kibbles (which are treats here) next ta the bowls. We eat the "treats" fast an then momentum sorta carries our nosies right into the bowls.

Spyro,
The best time to climb into that container with the nice soft stuff is when it's still warm from one of the big white boxes! Oh, and if it's a load of darks, all the better!
Taz, Runt, and Charles in IL

Nice to meet you Spyro!
Glad you are getting along well so far with him, Herman.

Hello Spyro! You're one lucky kitty to be in that home and Herman is an angel to be so sweet to you.

Welcome and nice to meet you, handsome Spyro; so happy you found such a loving home, sweetie!...Very glad Spyro and adorable Herman are getting along well...Happy week and month ahead, precious friends...xoxo...Calle, Halle, Sukki