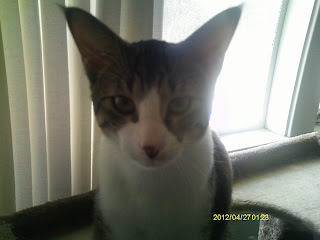 Spyro:  The lady thinks I have froot bat ears.  What do you think?

Spyro:  But I thought that she was your Mom.

She is, but she is your Mom, too.  I am willing to share.

I am not sure I am ready for that yet.

Karen Jo:  You will be soon, Herman.  Herman really is willing to share me with Spyro.  When Spyro jumped up on the bed Wednesday night, I thought there would be trouble, but there wasn't.  Herman moved down near my feet to give Spyro room to crawl all over me and that's exactly what he did.  He just wouldn't settle down and kept waking me and Herman up.  Herman finally got up in disgust and went to sleep in the living room.

Spyro:  I was just excited to be in a new home with a new family.  I let everyone sleep last night.

Karen Jo:  That you did.  You slept on my pillow, leaning against my forehead and Herman slept next to my chest.  The two of you were less than an inch apart.

Spyro:  Mom took away that round thing with the ball that Herman wouldn't let me play with and replaced it with this: 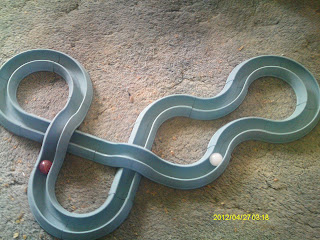 Karen Jo:  Herman had torn up the cardboard scratcher on the Turbo Scratcher something awful and Spyro wanted to chew on the cardboard.  I took it away and put together the two Turbo Tracks that I got for Herman's birthday. 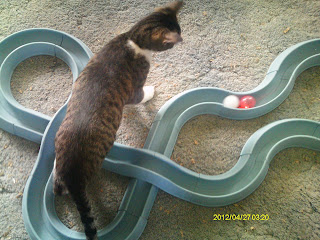 Spyro:  I really like it.  I started playing with the balls as soon as Mom put them in the track, even before she got the last piece in place.

Wait a minute!  You gave Spyro my birthday present?!?

Karen Jo:  Don't worry, Herman.  Your birthday isn't until June.  I will order you something else.  You won't get left out.  Now I have some questions.  What happened here? 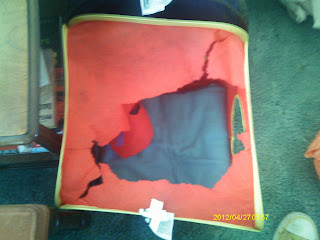 Spyro:  That's easy.  I was up on the table and jumped down on top of it.  I went right through.  It was an accident.

Karen Jo:  It's OK, Spyro.  You still have the purple one to play with.  Who tore open this new bag of Temptations? 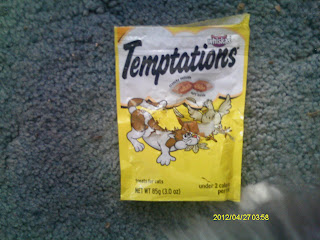 Spyro:  Herman did it!  I saw him eating them.

Karen Jo:  Spyro, I quite believe that you saw Herman eating some of the Temptations once the package had been torn open, but he has been living here for a long time and he has never done anything like this.  It was you, wasn't it?

Spyro:  Yeah, I guess so.  But they are so good and they were just sitting there in plain sight and easy to get to and you weren't here to ask for some.

Karen Jo:  It's all right.  I put them away in a drawer now, so you can't do it again.  What amazes me is that over half the bag was still in the bag.

We weren't hungry enough to eat the whole bag.
Posted by Karen Jo at 5:10 PM

Well, Spyro, you've certainly settled in with no problems at all. LOL. Making yourself right at home, apparently! :-D

Hello Spyro, nice to meet you. We missed the last post so just went back to read about you. We are glad you and Herman are getting on together.

well, they were Temptations! What do you expect?! Who can resist such a yummy temptation?! :)

And, I likes the ears just fine.

I am so glad you and Herman are getting along Spyro! That is so cool you are all ready sleeping in the bed with Mom. I am so proud of both of you!

We are so glad things are going to well with you and Spyro! What a great guy you are Herman to share so easily!

Spyro, you do have some ears! I'm glad to know that you and Herman are getting along and even teaming up on some mischief!

Welcome, Spyro!!!!!
So nice to meet you.
I bet there are some adventures in store for you and Herman. ; )
xo Katie & Glogirly

WE love your ears! Spyro!

Yep, you haf frootbats! Sounds like general mayhem at your house too. Can we join in?

Frootbat ears-yes but they're really cute! Mommy thinks Emma is helping Spyro settle in, from the Bridge. Our mommy says she thinks is amazing that you are both sleeping with your mommy, and not hissing...We think it's because you are brothers, since sisters can be pushy and...
Princess says no, we are not!
See what we mean! anyway, we are happy that Spyro is settling in and that Herman is enjoying the rewards of having a brother who knows how to get to the Temptations!
Sending snuggles to all,
Taz, Runt, and Charles in IL

Herman, what a good boy you are!

Spyro, glad you're settling in so well!

Haha! You two are already getting into trouble! Cool!!

It is allus fun readin about the adjustments and tricks of a new kitty in the house.

We not only think you have frootbat ears we thinks you are a handful.