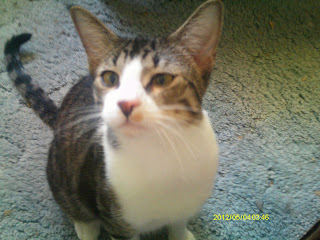 Spyro:  Mom says I get the blog all to myself today.  I'm showing off my frootbats.  Mom had a hard time getting this picture, because I wanted to smell the camera and play with the strap.

Karen Jo:  It's out of focus.  I put my little point and shoot camera into portrait mode to take pictures of the cats, but they come out out of focus almost all the time.  Could someone give me a suggestion?

Spyro:  I had some fun this morning.  After Herman got Mom up at dawn to feed us breakfast, I started playing with the kitchen doorstop again.  I got tired of it and went into the living room.  The wind blew the kitchen door mostly shut and Herman had to go wake Mom up again to get her to open it.  He could have pushed the door open himself, but he's lazy that way.

Karen Jo:  I thought that Herman just wanted the dry food put out.  I didn't do that at dawn because there wasn't enough light to see the measuring cup marks and I didn't want to turn on the light because I was going right back to bed.  I opened the kitchen door and replaced the door stop and gave them their dry food and went back to bed.  The boys let me be until I was ready to get up for the day.

Spyro:  I have started carrying toys around in my mouth until I find the perfect place to play with them.  The balls in cages that rattle or jingle are a lot more fun in the kitchen on the smooth floor than on the carpet.  I took one of the jingle balls to Mom in her room so I could be with her while I played with it.  I also found out that if I lie in a chair, I can give Herman a swat as he goes by and make him run.  That was really funny.

Karen Jo:  I wonder what Herman thought of it.  Maybe he was hoping that you would chase him.  He really wants to play THoE with you.

Karen
Does your P and S have a pets and child setting? If it does try that or the AUTO setting and see if either of those settings work better for you. Spyro you are adorable.
purrs
>^,,^<
♥Abby♥Boo♥Ping♥Jinx♥Grace♥

Hey Spyro, you are really catching on quick!

It sounds like you're really enjoying your new home, Spyro! We LOVE it. :)

Mom Karen, is there a "burst"-type mode on your camera? It's the one where the camera takes a bunch of pictures in a row when you push down and hold the shutter button. You'll get a series of 5 or 6 pictures, and you can choose the clearest one.

Hi to our pal Herman, and hugs to you all!

Hi Spyro, Mom's been slacking and we didn't know about you. We think you're a cutie pie!!

Also, if you need to set the camera on a table or something hard if your hand shakes a little. This will make sure that's not causing the problem!

...try to get as much natural light as possible....that will help. Also, Chey's suggestion of setting the camera on a table or other surface is great. When there's not enough light, the camera automatically keeps the "shutter" open longer than you are able to hold it still. The table will act like a tripod.

You are settlin in so nicely. We luf THoE! It's alot of fun and after a while, it drives the hoomans crazy! (that's the best part)

Spyro, it sounds like you are very creative! You are coming up with all sorts of games.

If your camera doesn't have a "child and pet" setting, look for "sports" mode. I often snap pics of the boys in sports mode, but outside. I don't have much natural light inside, so when I use that mode the pics come out grainy. But if you have a lot of natural light coming in, either a pet or sports mode might work better.

The camera TBT uses has an "easy" setting that might help. Or 'sports" or "auto". Walmart sells fairly good inexpensive tripods, too.

Spyro, I carry toys around at night too, and talk loudly while doing it. Not to play with, but to pile up in the bedroom doorway. - Ayla