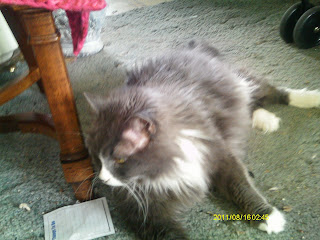 I am always turning away from Mom as she takes my picture lately.  You get a good look at the inside of my ear, though. 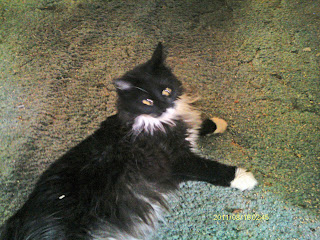 Emma: I am also being wiggly when Mom takes my picture.  But then, I  wiggle ALL the time.

Tuesday was really the weird day.  We did things we don't normally do.

Emma:  I went for a ride in the stoller.  I loved most of the ride.  I only meowed a few times.  I got worried when we went inside, because the only place I have been inside in the stroller is the vet's.  It turned out not to be the vet's, though.

Karen Jo:The nice lady at the pet supply store wanted to see you.  She had never seen a cat in a stroller before. She even took a picture of you.  I wanted to get a mat cutter for Herman and a new litter pan to replace the one that broke.  I don't think the mat cutter I got will work on Herman's problem, but I can get another kind from a catalogue.

Emma:  You put the weird litter in the new litter pan and we still won't use it.  Hahaha!

Karen Jo:  I didn't know whether you recognized the litter pan from the evacuation and didn't want to have anything to do with it, or if it is the litter itself that you object to.  Next I will put it in one of your old litter pans to see what happens.  I tried to get more Swheat Scoop at the store, but they were still out of it.

After that it was my turn to for a ride in the stroller.  I still don't like it.  I meowed at Mom the whole way to the vet's and the whole way back.

Karen Jo:  I needed to get you some more Interferon, so I took you along to weigh you.  You gained two tenths of a pound. Do you know what that means?

No, but I don't think I am going to like it.

Karen Jo:  It means that I am going to have to put the kitten food where you can't get to it, but Emma can.

Karen Jo:  I am sorry, but you need to lose about three pounds. Switching you over to grain-free dry food took off six tenths of a pound, but now you have put two tenths back on.

At least I got some good stuff for supper.  Mom had steak for the first time in weeks.  I got a lick or two of sour cream and three bites of steak.

Karen Jo:  You got four bites, but you only licked the fourth one. Speaking of that, I found out something new about Emma.

Emma:  I am full of surprises.

Karen Jo:  That you are.  I found out that you don't like Greenies.  It is Interferon week.  Herman loves his Interferon and actually begs for it when I open the refrigerator in the morning.  You don't really care for it and resist taking it a bit.  I thought that I could get you to like it better by giving you a treat right after the Interferon.  I gave you a Greenie right after your Interferon and you spit it out.

Emma:  It was too big and too hard for me.

Karen Jo:  It is still sitting on the chair where you spit it out.  I am surprised that Herman hasn't found it yet.  I guess he will eventually.
Posted by Karen Jo at 12:39 AM

I can't even imagine being in a stroller - I think it would make me very nervous!

You guys have had stroller adventures! The mom's pretty sure we'd freak--especially Nicki.

BTW, Emma, we actually don't like Greenies either! And that was before we had most of our teeth removed. :-P

I don't think any of us would be very stroller happy. We are all kind of scaredy cats!

Wow, you two sure are brave. We're not sure we'd like the stroller!

WE are glad you liked your stroller ride! We think Herman will not eat the greenie that Emma spit out. We do not like to taste other cat's spit on our treats!

Hmmmmmm, a stroller...I don't know either. Hey Herman, I am on a diet too and couldn't get enough to eat, so I added in a second diet. Just a thought pal.

Brian's idea is good! Sum of us don't like greenies, either. We hopes there are lots of fun stroller rides fur you in the future. Purrs

Strollers would scare us too. But we don't mind being carried, thank you!