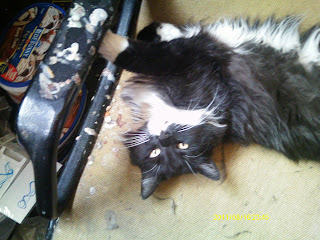 I am clillaxing in my computer chair.  Mom is messy and she has gotten all sorts of stuff on the arm and side of the seat.  Maybe some day she'll clean it up. 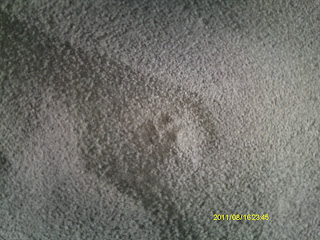 Oh, gross!  It's my turn to blog and you put in a picture of the litter box?

Karen Jo:  That's your paw print in the litter.  You were the first kitty to try out the Desert's Sand litter, just a few days after I put it in the new litter box.

That was a long time ago.  We are both using that litter box now.

Karen Jo:  I know.  I haven't been blogging because I have been working very hard and coming home exhausted again.  Right now I am in the middle of working seven days in a row and don't know if I will be blogging again until September, which is only a few days away.

You can blog more if you work at it.

I am glad that you didn't take the kitten food away completely.

Karen Jo:  I put it up on the high shelf in your room, where Herman never goes.

He's too fat to get up there.

Karen Jo:  Emma, that's not nice.  Herman could get up there if he wanted to, but he has never wanted to.

The important thing is that now I get kitten food and Herman doesn't.  Hahaha!

Karen Jo:  You haven't eaten much of it.  You have mostly been eating the duck and pea when you eat dry food.

Herman eats the duck and pea, too, along with his diet food.  I don't know why he likes that stuff.  It's like the kitten food, but not as tasty.  The other day we ate so much duck and pea that the bowl was empty.

Karen Jo:  You don't understand why Herman likes people food, either.  He has been tasting my food almost every day lately.

Herman will eat almost anything.  He even ate that Greenie that I spat out.

Karen Jo:  I was surprised at how long it took him to find it.  He didn't find it for three days, until you kicked it off the chair onto the floor.

Herman sure has been chasing me around a lot lately.

Karen Jo:  The weather has been cooling off and that makes him more playful.

I found a new hidey-hole to get away from him.  He can't fit under your dresser.

Karen Jo:  That's true.  It's smart of you to duck under there when he tries to corner you.

Some of our toys have gone missing.  You need to go on a toy hunt.

Your human's job has been working her too hard! They need to cut her some slack so she can get to what's important, which is helping you and Herman blog!

Hi guys. Just to let you know, we visit using Google Chrome and we just got the malware alert message that's been going around. (See our Friday posts and comments on the CB for that day.)

You need to remove sweetladycat.blogspot.com from your blogroll/list widget, then you should be okay. It all started with Daisy the Curly Cat--one of the blogs she linked to was hacked and that made Google think she was hacked, etc. We were having this malware alert too, on our site, until we removed Daisy from the list, temporarily. Then we found out that Brandi's blog (sweetladycat.blogspot.com) also was causing the alert (only in Chrome), so we just removed our entire blog roll widget for the time being.

So you two decided to use the new litter! Well, that's a good thing!! Hope your mom gets less busy so she can help you blog.

HEhe!
Dear friends, have a sweet and nice Sunday!

We're visiting on Firefox because we got the same malware notice on Chrome.