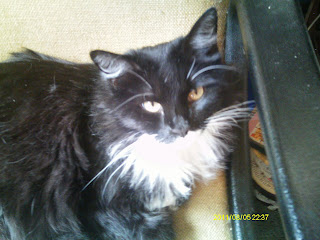 Mom thinks that this is her computer chair.  I think that it is my chair.  You should see all my fur on it.  Now Mom wants a word.

Karen Jo:  I really apologize for not blogging in such a long time. This is a very busy time at work and I have been coming home exhausted.  I have also had a bunch of doctor appointments for which I have to get up early and that only adds to the problem.  It's nothing major.  I got a fungus on my hands which is proving to be a tiny bit stubborn and I had my eyes checked.  The eyes are fine; I just need a slight adjustment to my eyeglass prescription.  I will try to do better, but things are going to get even more hectic for a little while, then in September things will get a lot better for me.  Now back to Emma.

Mom didn't eat anything very interesting until today.  She cooked an oven roast and drove us crazy last night with the smell, but she didn't eat any of it.  She got it out again today and Herman went nuts.  He kept begging and begging for some, but only ate one bite.

Karen Jo:  I'm surprised that he even ate one bite.  Herman doesn't usually like roast beef, unless it's rib roast.  This was a sirloin tip.  You didn't want any at all, though you licked your bite.  I know, you just want your cat food.  You will be glad to hear that I got some more duck and pea for you.

That's good.  I like the duck and pea.  You did something weird with the litter boxes.

Karen Jo:  It was well past time for new litter.  I always get you Swheat Scoop, but they didn't have enough at the store for both litter boxes.  I got something called Desert's Sand for the other litter box.

It's weird and it's in a different box.  It's in the box that the crystal litter was in. Neither one of us has used it yet.

Karen Jo:  One of your regular litter boxes broke while I was cleaning it.  Part of the bottom just broke right out, so I had to dump the crystal litter and use the new box that I got during the evacuation for the sand litter.  I should say that I wasn't able to get regular litter boxes for a while, so I was using plastic storage boxes that aren't as sturdy.  I hope that you get over the newness and try it out.

Maybe.  Herman was mean to me again.  He cornered me in the entrance hall and made me cry.

Karen Jo:  I think it was more of a snarl than a cry, but he was being mean to you.  It did eliminate the speculation that Herman didn't like you using "his" litter box in the bathroom and was being mean to you over that.  The litter box in the entrance hall was the one with the crystal litter and neither of you had used that since the evacuation when you didn't have a choice.  I think he is just trying to make sure you know who is the Alpha cat around here.  You were mean to Herman this morning.

You were giving me my morning petting and he tried to muscle in.

Karen Jo:  That's not quite true.  He jumped up on the bed and just got close to both of us.  I never stopped petting you, but just reached out to give him a pet to let him know that I knew he was there.  You hissed at him and went at him with your claws out.

I didn't even touch him.  He is good at ducking.

Karen Jo:  He has to be with you being so jealous.  I thought you were over that.

Not when it comes to my morning petting. That is MY time and my time alone.

Karen Jo:  I will have to remember that from now on.  I have been coming home to find your toys all over the place.  Do you and Herman play with them together, or do you each play with some by yourselves?

We aren't saying.  It's cooler now, so we both feel more like playing while you are gone.
Posted by Karen Jo at 1:06 AM

It's a long time I haven't seen you and Emma ! Of course it's difficult to get used to another sand in the litterbox. Humans don't understand these sorts of things !

It certainly sounds like a lot has been going on while your human was off doing human things! Does she ever make roast chicken? I would go NUTS if my human made that!

It's nice to see you guys again! We all understand about the blogging and being busy and tired, though. At least the humans understand. :-)

If my human knew most of what I get up to when she isn't around I think she would be rather surprised and not a little concerned. FAZ

We're sure you two will get used to the new litter boxes and litter - it's just that it feels different under your paws.
Emma - remember Herman is older than you and needs some peace sometimes.
Luv Hannah and Lucy xx xx

Sounds like Karen Jo has her hands full with you too.

Can U believe Arty Mouse play wrestles with Fenris. Mommy gets a good laugh out of those two playing.

Hehe! Good to see you again!!!!!
Have a great weekend dear friends!

You and your mom had an interesting Caterday conversation. HOpe your mom will be done with her doctor's appointments and the stuff that keeps her busy, so she can spend more time with you and Herman. She deserves a good rest:)

Well is sounds like things are okay at your home even if your human is not blogging much.

Yep, sweet Herman we agree that is your computer chair...it has to be since we don't think your mom has furs.

Tell your mom to take care of herself and get some rest. We will be here when she has more time to help you post.

Oh, sweet Emma we do apologize for silly Mumsy calling you Herman. She is all time thinking of one thing and typing another. We knew you were not Herman...but Mumsy just don't pay attention until after the fact. Hugs and nose kisses

Emma, we always enjoy hearing your side of the story when you and Herman spat; sometimes he doesn't paint you in the most favorable light! Sylvester LOVES roast beast, he's all puzzled why you don't like it. Oh well, more for him...
Purrs to your Mom to de-fungify quickly!

Well, at least you both are getting your licks in! Herman doesn't like you using his box and you don't like when he interferes with your pets! Sounds like you both are doing just fine!

Just exactly what is goin on while your mom is at work? We think you two might play together! xoxo

Years later 1997 she visited one of her friends in Alamogordo and that's when she met a young Sammy.....she fell in love with him. He was being raised with two puppies, and they were calling Sammy "Puppy"...mama knew he needed to know he was a kitty and started asking to please take him home with her....and after a few days of her begging, it worked!!!!! :)

Love to you, Herman, Emma and Karen Jo.

Well, with all THAT fussing going on, we hope you are at LEAST playing with the toys together nicely while Mom is away!

Herman and Emma sound like they sometimes enjoy being with each other about as much as Peaches and Dolce do sometimes.
Peaches tries to be the alpha cat by charging and screaming at Dolce. He's afraid of her. Sometimes they will have a hair-all-over-the-place fight. :-/ Peaches then gets scolded and knows that's her cue to go to the door and be let out. We would like them to get along better, but there's no reasoning with an upset cat.